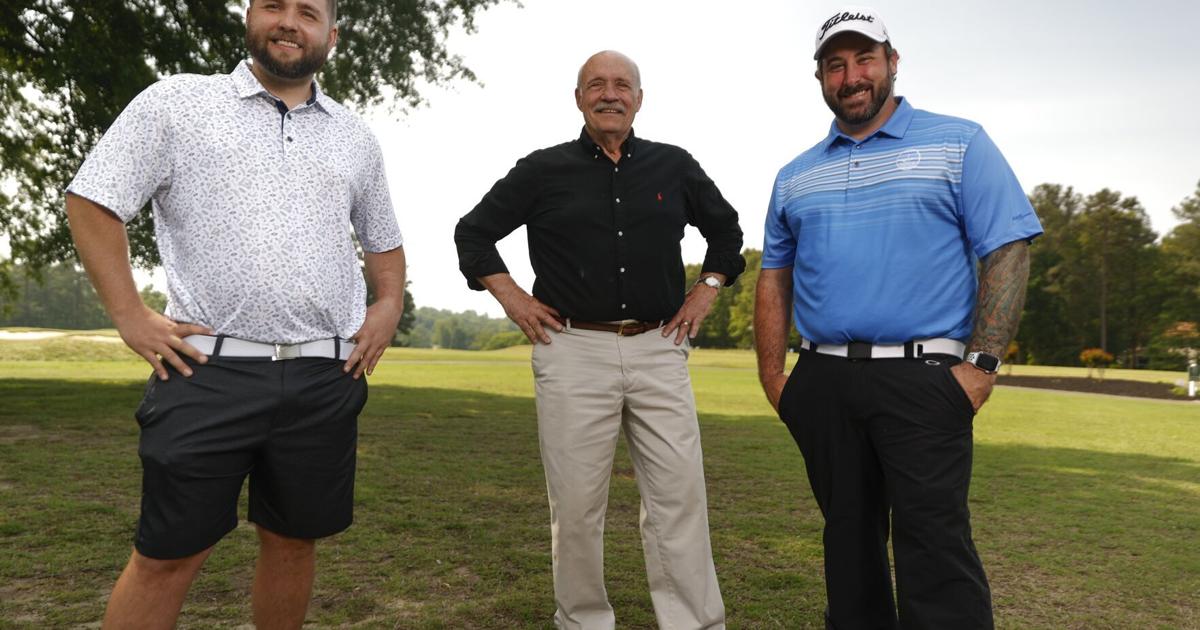 Longtime friends Nick Foley and Jake Albritton stood poolside at Hanover Golf Club last month as the morning temperatures soared – good news for the lush green fairways that stretched out before them.

Hot days and more importantly, warm summer nights, will do wonders for that healthy Riviera Bermuda grass, they noted. Where Mother Nature’s work ends, however, theirs begins.

The sprawling 135-acre property nestled in the heart of a quiet residential neighborhood just west of Ashland is a semi-private club, which means it’s open both to members and the public. It features 18 holes – par 71 – amid a pastoral setting that challenge players thanks to terrain that’s anything but flat.

Since closing on the deal April 1, they’ve already expanded the pro shop inside the clubhouse by reclaiming a throwback feature – an old cigar room – adjacent to the space. New paint and carpet are going in daily these days throughout the building. Locker rooms and bathrooms will get modern touches.

A room at the back of the club that looks out over the club’s Olympic-sized pool and tennis, basketball and pickleball courts will have an Augusta theme – a nod to the famed Augusta National Golf Course, which is home to the legendary Masters Tournament.

Outside, there are plans to spruce up the pool area, which has a separate fenced-in kiddie pool. Future plans also call for a new pavilion near the pool that could serve as an outdoor special events venue to complement the club’s existing 150-person banquet room.

Big plans, but par for the course for a Hanover County family committed to bringing out the best in their community.

Sitting in the club’s restaurant earlier this month – one of the next areas to be renovated – Nick Foley said he grew up playing golf with his father and grandfather. But he had never played at Hanover Golf Club, and on a cold January day this year, showed up at the club with Albritton to change that.

They were met with a “closed” sign on the door. A dusting of snow had canceled their plans – but kickstarted an idea that turned out to be a stroke of good luck.

Seeing the course, they joked back then about how they’d love to own it. What they didn’t know was that the course was already on the market.

Albritton, a Realtor, found the listing about a week after they tried to play the course. He and Nick Foley took the idea to Dale Foley, who was looking for an investment opportunity. Dale Foley is the founder and chairman of Ashland-based Foley Material Handling, in business near the Hanover Airpark since 1975. He was also a founder of Virginia Motorsports Park in Dinwiddie.

While they had never owned a golf course – and despite never testing their golfing prowess on its greens – the group made an offer.

“The course is just phenomenal….[and] the conditions were so much better than we thought,” said Nick Foley, who works as project manager for Foley Material Handling. They purchased the club for $1.35 million.

Where the bones were good, he said, aesthetically, the place needed some love.

“Everything was dated – it needed a facelift,” Nick Foley said. “Once you get the clubhouse looking more modern, it’ll match the course.”

The club’s history is a storied one. Known for decades as Hanover Country Club, it opened in 1953 as a private 9-hole course that catered to the Country Club Hills community built around it. Throughout the years the course was enlarged, the clubhouse was built and amenities added.

During the early 2000s, the club fell on hard times and it began losing money. In 2012, facing bankruptcy and an outside offer to turn the property into a pine tree conservation farm, nearly 100 club members joined together to save it, said Bob Yevich, a club member and the lead investor in that group.

In 2014, he said, the club hired Mike Hatch, president of Acumen Golf, which owns and operates Birkdale Golf Club and Brandermill Country Club, both in Chesterfield County. With an extensive background in golf course management as both a consultant and owner, Hatch is also a former chair of the National Golf Course Owners Association.

“Mike really saved the place for us,” Yevich said. “It was hand to mouth for a number of years.”

Hatch brought Hanover Golf Club back from its floundering existence, largely by restructuring it as semi-private, Yevich explained.

It’s that expertise that led the Foleys and Albritton to continue that relationship with Hatch. When they bought the club, they signed a five-year deal with Hatch to continue to oversee daily operations.

Another perk of that relationship – reciprocal golf memberships among the three clubs. Membership at Hanover Golf Club means memberships at Birkdale and Brandermill – a novelty in the metro Richmond area.

By phone last week, Hatch confirmed those earlier efforts to help the former owners get the place back on track. He said at the beginning of this year, with finances and cash flow stable, and the former owners ready to hand over the reins, Hatch said he and they agreed to test the real estate market.

There were a few potential buyers, Hatch said, though the Foleys were the best candidates.

“As a family, just tremendous people,” he said, “and the most qualified candidates with respect to the impact they’ll have on the community and what they can bring to the table with the relationships they already have.”

The ink is barely dry on the deal, he said, but the Foleys and Albritton have already begun to show that commitment. He said their “mom-and-pop” approach to creating a welcoming, family-friendly environment, combined with enhancing the club’s golf facilities, will position Hanover Golf Club as a golf destination in central Virginia.

“Like any golf course, they get older every day [and] the club needs money spent on it from deferred maintenance,” Hatch said. Thus far, “their commitment is very obvious to the membership.”

Hanover Golf Club offers full monthly golf memberships, as well as social memberships that allow patrons access to the pool, clubhouse, restaurant and banquet hall, but not the golf course. The club is open for public golf, too, as well as summer pool memberships.

It currently serves 151 members and 150 social members. Last year, golfers – both members and those stopping by for the day – played more than 14,000 rounds. Its new owners are hoping that number reaches north of 23,000 before too long.

Nick Foley said they’re hoping to grow both memberships and public play – the latter being part of a recent trend for golf courses as traditional membership-only clubs gradually lost money from decreasing interest in golf.

“Pushing public golf…is what helps make it profitable,” Nick Foley said. “If you can fill up your tee sheet all day [from public rounds] that brings in a lot of money.”

They’re also hoping to use the club as a means to connect to the community through holiday events, wine and beer events and more.

Albritton said early reactions from the community are promising.

“The culture is great,” he said. “It has a great following – people love this place.”

Nick Foley echoed that, saying that an owners party held in April to introduce themselves to members and the community drew a packed house.

“It’s a challenging course, but it’s beautiful and a lot of fun,” he said, “and people remember that.”