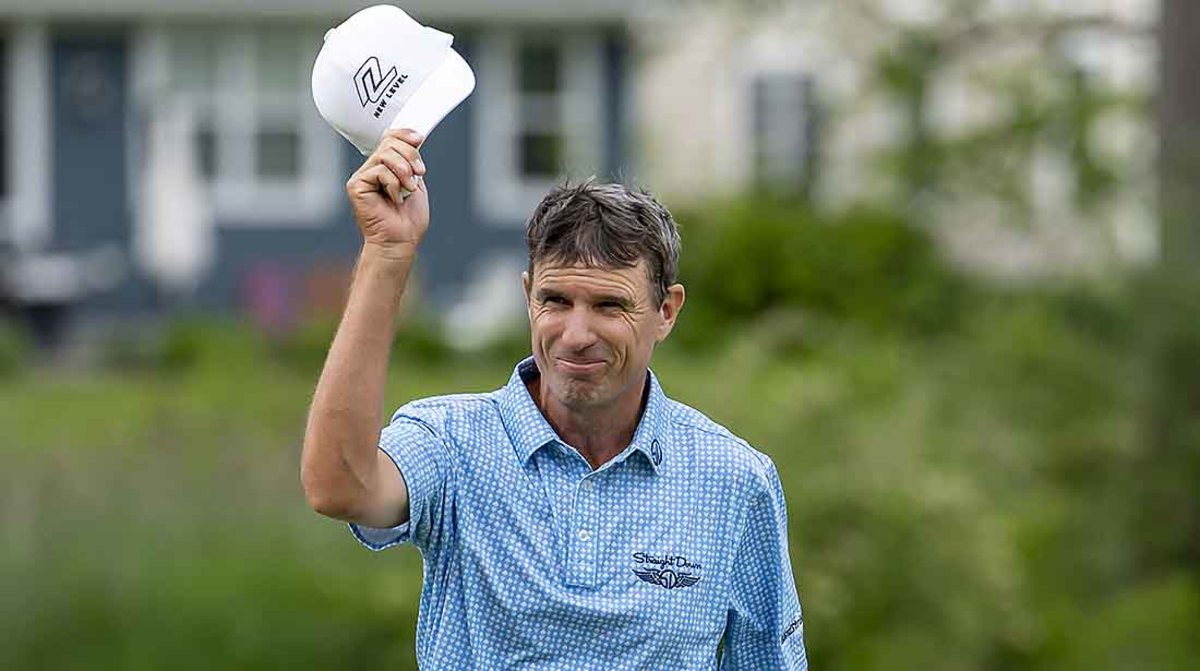 Steven Alker shot 63 on Sunday to grab the Senior PGA Championship, his third win in two months on the 50-and-over circuit.

BENTON HARBOR, Mich. — What the hell has he been doing the first 50 years?

That’s the question Paul Goydos wanted asked about Steven Alker, after shooting an 8-under 63 in the final round of the Senior PGA Championship for his first major title.

Goydos, 57, is a veteran on the Champions Tour and while he has won five times, he knows after playing with the Kiwi for the first time that Alker, at 50, is better in every category.

“He’s got gears, so he can drive it where I drive it one day and then drive it 50 by me the next,” said Goydos, who was in the group with Alker on Sunday. “He’s really, really good, I mean impressively good. He doesn’t have any weaknesses.”

Starting the day four shots back of Stephen Ames, Alker was seemingly in control early with three birdies in the first five holes.

When he recorded his only blemish on the 7th hole with a bogey, he came right back with two additional birdies, turning at 4-under 32.

From there Alker never looked back, adding four more birdies on the inward nine and two impressive up-and-downs on the last two holes to win by three shots over Ames.

“First I saw Arnold Palmer, I’m not sure what year it was, and you twist it and you see Lee Trevino and you see Jack Nicklaus and you see Tom Watson,” Alker said of the names on the Alfred S. Bourne trophy. “It’s pretty cool.”

Alker may sound like a kid in a candy store, which is understandable.

Since he was a kid and decided that he would drop all other sports, including soccer, to focus on golf, he had limited success — until now.

Alker played in many of the worldwide tours from the Australasian, Canada, Korn Ferry, PGA and European Tour, with limited success.

The type of success that doesn’t really pay the bills.

“It happened really quick, those two or three years, like wham. I had some pretty good form and feeling good. And then, you know, I just didn’t get it done out there,” Alker said of his fleeting success on the PGA Tour.” “So just perseverance. That’s all I can say. Just perseverance with a capital ‘P.’”

The perseverance that Alker was talking about showed up during Saturday’s third round.

After making his second double bogey of the round, Alker made birdies on the 15th and 16th holes and a good save on the 18th to turn an even-par round into a 2-under 69 and cutting the deficit from six shots to four, making his work a little easier to track down Ames.

“I clicked on something last night and just stayed aggressive, conservative aggressive we were talking about,” Alker said. “Just knuckling down and just doing me. Just doing my stuff. “

For Alker, “conservative aggressive” is defined by taking advantage of the scoring clubs — 8-iron, 9-iron, wedges, sand wedges — and being aggressive.

At the same time, with anything above a 7-iron, Alker is just hitting to the fat part of the green and giving himself chances.

In neither case is he flag hunting, just playing to the percentages.

“There was never any panic,” Goydos said of Alker on Sunday. “His golfing never got quick. He never got off routine. He never did anything wrong. I mean, he looks like a guy who’s gonna win major championships.”

Alker now turns his attention to Des Moines and the next PGA Tour Champions event, and then in a couple of weeks the U.S. Senior Open in Saucon Valley.

“Just another golf course I have haven’t seen,” Alker said of next week’s venue, Wakonda Club. “That’s what I love about the Champions Tour, for me just seeing all these new golf courses. It’s like just a whole new chapter in my career, a new atmosphere. Yeah, it’s just so much fun. The guys have been so welcoming out here, and I hope they will stay that way.”