The 13th hole is a godsend for golfers in Tehran, but how long? 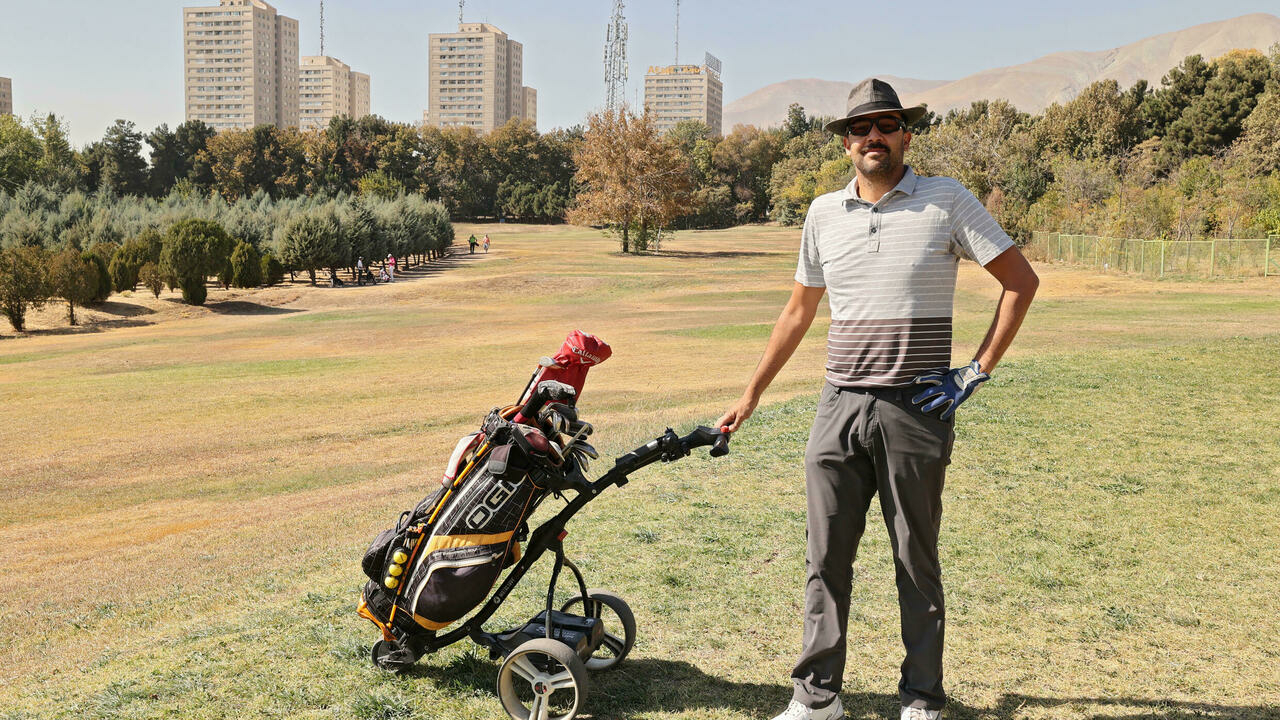 The Enghelab golf course, which currently hosts the national championship of Iran, has only 13 holes, not 18 as in other large country clubs.

When the course was built decades ago it had five more holes, but over the years the fairways have been eroded by development. Tehran’s tiny contingent of players are happy to have 13 left but fear that more of the pitch could disappear.

“Although golf is one of the top 10 most popular sports in the world and has a 100-year history in Iran, it remains one of the least known here,” Saeed Barati, 39, third in the current tournament, told AFP.

“I hope that we don’t completely lose this course, which already has only 13 holes,” he said in front of the backdrop of skyscrapers and mountains beyond the tree-lined course.

During the national golf tournament of Iran, players compete on Tehran’s Enghelab Square in front of a backdrop of skyscrapers – the development has eaten up part of the playing surface ATTA KENARE AFP

Barati, who works in the oil ministry in southwestern Khuzestan province, is concerned that “the country’s sports officials do not have a positive view of the game.”

Football and wrestling attract most of the nation’s attention.

For some like Tamadon, 44, golf is a passion. He plays in the national championship and explains how the course ended up with only 13 holes.

The anomaly has nothing to do with superstition or a mistake by those who designed the fairways in 1964.

Golfers fear they could lose the rest of the course, which is prime real estate ATTA KENARE AFP

After the Islamic Revolution overthrew the Iranian monarchy in 1979, the country’s new leadership nibbled at the square, declaring it too big for the game’s small number of players.

Buildings of the Ministry of Sport and the Olympic Committee were erected on the fairways.

“It started out as 18 holes, but since golf was obviously not very popular,” other sports, buildings or departments began to occupy part of the country, said Tamadon, an industrialist.

The club in Tehran has around 300 members, half of them women, but that is a tiny number in a metropolis of more than eight million people.

The course was built in an upscale neighborhood of the capital and is located in the Enghelab (Revolution) sports complex and was known as the Imperial Club before the Revolution overthrew Shah Mohammad Reza Pahlavi.

For this year’s championship, all 90 participants, who come from all over the country, will first play the 13 existing holes.

Then repeat five of them to make 18.

With a blue leather golf glove on his left hand, film producer Amir Zoveini remembered the historical baggage that was associated with the sport on site.

Golf has a bad reputation in the Islamic Republic for its association with elites under the former monarchy, says a competitor who sees the game’s history as more complex ATTA KENARE AFP

“The word ‘golf’ has a bad rap” in Iran because it is associated with elites and the former ruling class under the Shah, who have often been shown playing golf or billiards in films, he said.

However, Zoveini rejects the elite federation, claiming the true history of the sport is more complex. It all started in the south with British oil companies, he said.

The Iranians started out as caddies, but “in the end they learned the game and played it themselves” after the nationalization of the petroleum sector in 1951 and the departure of the British, Zoveini said.

Aside from Tehran’s lonely club, most of Iran’s golf courses are in the oil-producing south.

Like Barati, Zoveini fears that his playground could disappear entirely because “this is a huge country, this is a prime property and few people play”.

He suspects that the Golf Association of the Islamic Republic of Iran wants to erect a building on the last green of the course – the so-called “18th” – instead of investing in a new generation of players.

His organization intends to train 3,000 players, both men and women, across the country and create a “national academy” outside of the Tehran course itself, he said.

The “18th” Green is used as a venue for competitions and as a training ground at other times, said Azizi, countering doubts about the future of the game.

“Golf in Iran has the potential to become one of the most popular sports,” he said.