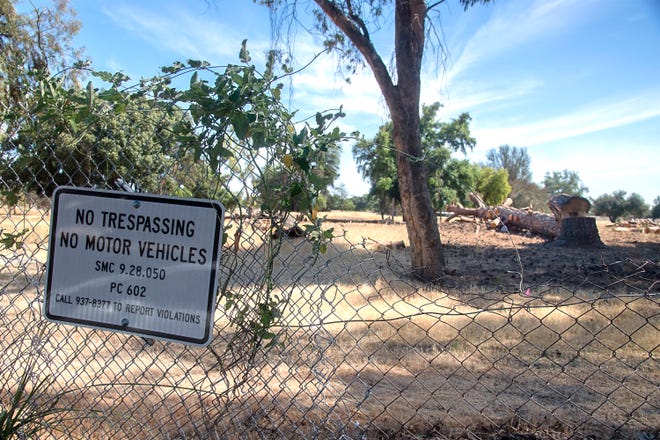 The reimagining of south Stockton’s Van Buskirk Park is still unfunded and bogged down in bureaucracy and planning, to the dismay of some on the city council dais.

“People are waiting, our kids are waiting,” said councilmember Kim Warmsley at the May 24 Stockton City Council meeting. “It breaks my heart to hear that we’re still going to wait and that there’s kids who are not going to have access to their rightful inheritance.”

Van Buskirk Golf Course opened in 1961 after the Van Buskirk family donated 214 acres of land to the city. Closed since 2019, the grass has long since dried out and dozens of trees have been cut down at the south Stockton golf course. The timeline for the renovation project has been delayed at least a year — the city attributes the delay to COVID-19 — a completed plan is not expected until fall 2023.

“This is something that needs to be fast tracked, because people think we’ve forgotten about them,” councilmember Christina Fugazi said. “I want to say right now that we have not forgotten you, but actions speak louder than words. … It matters what they see in front of them and can feel, touch and enjoy.”

Two public meetings were held to gauge public input for a Proposition 68 — $4 billion in bonds for state and local parks, water and environmental initiatives — grant to renovate Van Buskirk. Stockton was not awarded the state grant, and the city currently does not have funding for the park project.

Several public meetings have occurred to discuss the park’s master plan update, which, in theory, when completed will give the city a better shot at securing state funding. The discussion at the May 24 city council meeting was the first time the public had heard from Design Workshop, the firm given the $258,857 design contract with the city, in almost a year.

From the public meetings, Design Workshop has concluded that the community values safety at the park and would like to see gathering spaces, support for local schools and community groups and recreation opportunities for a variety of age groups at Van Buskirk.

Steve Noll, principal at Design Workshop, showed the council the latest rendering for reimagining Van Buskirk Park and the old golf course, which included allocating much of the western side of the park — where the old golf course is — to the Army Corps of Engineers to make flood mitigation improvements. The Army Corps of Engineers’ interest in the park had not been privy to the public until the council meeting.

Warmsley said she’d like to see Stockton’s youth get involved in the process.

“How do we get youth internships or programs — I’m thinking about the wealth of knowledge coming into this project,” Warmsley said. “We need to have a conversation about how to really incorporate young people as stewards to uplift this once-in-a-lifetime historic (project).”

Part of the plan includes a community garden at Van Buskirk Park. Councilmember Paul Canepa said he’d like to see a collaboration with the Black Urban Farmers Association, who currently operate a community garden in French Camp to provide pesticide-free fruits and vegetables, highlighting African American cuisine and plant-based diets.

Some of the council said they would like to see golf come back to Van Buskirk. Edison High and Weston Ranch High golf teams used to play at the south Stockton staple.

“In different sports such as golf or rowing, sometimes kids of color don’t feel that they belong in that type of sport,” Warmsley said. “To have that opportunity in this area gives them another level of dreaming and finding purpose.”

“I think you’d be surprised at the people I’ve been golfing with lately who now have the golf bug,” Fugazi said, “and they look nothing like me. They didn’t grow up around it. … I think we’ve missed out on a whole generation of individuals because they didn’t get to see it on a regular basis, it wasn’t something they were exposed to.”

Councilmember Sol Jobrack, who grew up golfing in Stockton, said a three-hole loop at Van Buskirk could satisfy the needs of school teams practicing for matches. The current plan from Design Workshop calls for a smaller “golf academy” for players to work on their short game. A driving range would not be included.

Public golf courses have been a hit during the pandemic. The National Golf Foundation saw a nationwide 12.4% increase on the year prior in rounds played at public courses in 2020 and a 6.7% increase in 2021. The Sacramento Bee reported the public Cordova Golf Course more than doubled its yearly income from June 2020 to June 2021. The San Diego Union Tribune reported a 36% increase in rounds played at city-owned courses, with revenue up 52% in 2021.

Former Stockton Mayor Michael Tubbs openly voiced his opposition to subsidizing public golf courses, as he believed the city could not afford them. In 2017, with the city spending $850,000 on golf courses and both Van Buskirk and Swenson parks’ courses on the proverbial chopping block, grassroots group “Friends of Swenson” mobilized to keep their north Stockton course after Tubbs had floated the idea of building mixed-use, affordable housing on the land.

In 2018 the back nine holes at Van Buskirk were closed after repeated acts of vandalism. In 2019, the city closed south Stockton’s Van Buskirk Golf Course all together. Today, the old course and the park show the lack of upkeep.

“It pretty much looks like we left it to rot,” Fugazi said. “For somebody to see that, it’s as if you’ve forgotten the people. It’s like, ‘You don’t even care enough about us that we’re not going to even have a place to go.’ ”

Mayor Kevin Lincoln stressed the importance of continued outreach to the residents of south Stockton as the Van Buskirk project progresses.

“We do have to get this right for our future and the children of south Stockton,” Lincoln said.

Record reporter Ben Irwin covers Stockton and San Joaquin County government. He can be reached at [email protected] or on Twitter @B1rwin. Support local news, subscribe to The Stockton Record at recordnet.com/subscribenow.