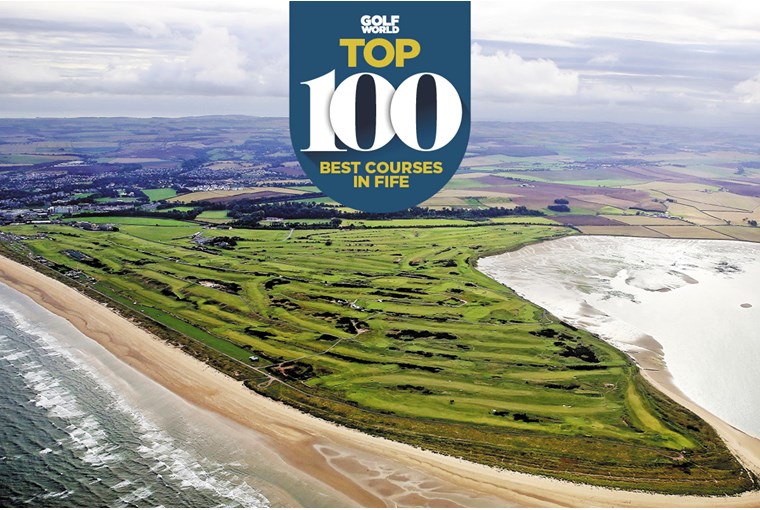 What are the best golf courses in Fife? The Golf World Top 100 panel chooses the top layouts in the Home of Golf.

You won’t be surprised to hear that the Home of Golf is blessed with incredible strength in depth. There are six
Golf World Top 100 Great Britain & Ireland entries, another 10 courses in the Scottish Top 100, and then a terrific supporting cast to back them up.

As the No.1 in the UK and Scotland, St Andrews Old Course naturally leads the way – one of three Auld Grey Toun courses in this list.

You’ll find quality galore in Fife, and not just at the renowned venues. There’s enough top-level golf to fill a month-long golf trip – and plenty of wonderful places to stay and off-course entertainment, too.

How did we choose the best golf courses in Fife?

Top 100 editor (and Scotsman) Chris Bertram was joined by the Scottish panel of Mike Bailey, Stuart Bendoris, David Jones, Alan McPherson, Douglas Mill, Darius Oliver, Susie Robertson and Neal Stewart to provide the framework for the regional rankings. McPherson, Robertson and Stewart have played every course in Scotland, Mill is a handful short, and their knowledge in every area was naturally priceless.

Our most recent GB&I Top 100 saw the Old Course ranked No.1 for the first time. It seems as surprising as it is, frankly, wrong. But there was a different emphasis in previous lists and also several outstanding rivals.

Still and always will be the Mecca for any serious scholar of the game. People will tell you to go left from the tee, but that leaves difficult second shots on ‘double’ greens.

The Old Course is the most special experience golf can offer for probably all of us. It makes the hairs on the back of your neck stand up on the 1st tee and it makes you think and plot your way around every hole after that.

It may be outdated for Bryson, but it’s not outdated for us. The magisterial links is the perfect blend of strategy, history and occasion. There are people who say those latter two elements do not deserve to be included in a ‘course’ ranking, but they are inextricable aspects of the Old.

The Old is about so much more than aura, though; the way it uses the modest contours of the land, the trip down to the Eden and the loop beside it, how the links is incorporated into the town and its peerless memorability mean it is worthy of its place right at the top of our rankings. All standards of golfer can nudge their way around the course, but you have to plot your way and play exceptionally well to score well on it.

The greens are as good as it gets, and the balance of the holes is just right. The 11th, the 17th and the 14th – arguably three of the seminal par 3, 4 and 5 holes in the world.

Most panellists’ favourite course of the modern Scottish layouts. If you didn’t know how much earth had been moved to construct the rolling ‘linksland’, you’d swear it had been there since time began, not since 2000 when Kyle Phillips turned this former farmland into a seaside masterpiece.

Much loved for its playability and stunning Forth views on every hole, Phillips’ sequencing takes you on a wonderful and exhilarating journey along a glorious stretch of coastline. Kingsbarns will be viewed in decades to come as marking the start of a superior age in architecture.

Dumbarnie came straight into the first Golf World Great Britain & Ireland Top 100 (No.69) for which it was eligible because from day one it was a links of high quality.

No.25 in our Scottish ranking, the Clive Clark links is so playable, so scenic and so easy to enjoy.

Already in mint condition, it is likely to rise further as it settles down. We played it just after it opened and it felt like a links much older than its few weeks.

It is easy to characterise; terrific sea vistas as far as East Lothian, hugely forgiving off the tee and funky around the greens. It’s hard to imagine anyone having a bad day here. Fife has another superstar.

We have been mooting Elie as underrated for some time and it finally broke into the top 30 of our most recent Scottish ranking and is 85th in our GB&I list.

Some might say it is too easy for the skilled player. Possibly. But two things: first, the large majority of golfers are not category one players; and secondly, it depends what you consider a ‘better test’. If you want a brawny examination of hitting, it is not that, agreed. If you want questions posed of course management, strategy, imagination, creativity, crisp ball-striking and nous, you’ll think it offers those and then some.

What’s more, it does all that in so many different ways on a collection of varied holes set down on wonderful undulating terrain that was made for golf. The green complexes are just brilliant and you get the wow factor along the shore, too. Magical.

The New splits the Golf World Top 100 panel. Some suggest it is as good as the Old and could be in the top 25 in Scotland, while others feel the holes are pleasant but that the gorse reduces playability.

It’s certainly as strategic as the Old, and this is indubitably a cerebral, interesting and nuanced links. Sits 92nd in our GB&I ranking.

This David McLay Kidd design on the outskirts of the Auld Grey Toun was initially criticised for its extreme greens, which have since been softened. They’re still a little extreme for some, but we tend to now think they are an interesting contrast to the more ‘classic’ St Andrews links – which is true of the clifftop course as a whole.

The views are glorious, and the course is undoubtedly fun and playable with several heart-stopping moments. Deservedly made it into our most recent GB&I ranking (No.100) and is 30th in our Scottish list.

Tom Morris/James Braid links whose split-level nature gives it a distinct feel. Offers great views over the Firth when it climbs up for its brief parkland phase, but the golfing highlights come on the shoreline opening stretch and the strategic par 4s throughout.

A beautiful, tranquil inland experience among Fife’s otherwise coastal top 10. Holes wind between mature pines and there is enough interest on and around the greens to keep even strong players challenged. A delight.

Home of the seventh-oldest golf club in the world, Old Tom’s thrill-a-minute cliff-edge links has been enthralling golfers since the late 1800s. Expect shots over rocky bays, testing par 3s and firing into cliffside greens – as well as sea views from every hole.

A links-heathland hybrid near Tayport, this James Braid design in several little sections is steeped in history and has been improved by recent work. Fairways generally bounded by gorse and trees. Lots of decent holes, notably the 4th.

A neat, unfussy links that gets especially bouncy in a dry spell. A very popular public venue that is quintessential Scottish links; not the most eye-catching, but consistently good.

It’s the closest St Andrews course to the sea and is arguably its most demanding. Originally laid out by John Angus and Willie Auchterlonie in 1897, but transformed into a championship layout by Donald Steel in 1988.

A formidable heathland-style layout just outside St Andrews, originally designed by Peter Thomson in 1995. It’s demanding – play from the right tees for your game – and has been reworked by Tim Liddy.

Expect plenty of clifftop drama at this main attraction at the luxury resort just outside St Andrews. Originally designed by Ryder Cup captain Sam, the Final Open Qualifying and Scottish Seniors Open venue had a refurb in 2009.

The 20-year-old Bruce Devlin layout is a classic clifftop layout in its own right, signing off with three of the last four holes on the cliff edge.

This Harry Colt design epitomises the strategic character and charm of the Old in a smaller form. You can’t help but be enchanted by it, and flattered too. A lovely links experience.

This modern links opened in 1999 and was designed by Gil Hanse, then less famous than he is now. No two consecutive holes face the same direction.

Has some great holes, especially the short 1st and 2nd. Underrated, well-maintained and short (up to 5,447 yards) parkland founded 1896 alongside the Firth of Forth. Guarantees an enjoyable test and stunning coastal views.

Undulating parkland designed by architect J.R. Stutt in the early 1950s and featuring five par 5s and five par 3s, as well as several dog-leg holes. The star of the show is Pitfirrane Castle, though, the gorgeous 15th century clubhouse.

Fine parkland that opened in 1983 and covers up to 6,318 yards within 140 acres of woodland in Markinch, so most fairways are flanked by mature trees.

RELATED: Best Golf Resorts in the UK and Ireland

Challenging 1904 Old Tom Morris parkland – it was his last design – Kirkcaldy offers great Firth of Forth views, its own ‘Amen Corner’ and a potential sting in the tail in the shape of a risk-reward par 5 and tricky par-3 finale.

Drink in stunning panoramic views over the Firth of Forth from virtually every hole of this ancient (1887) 5,000-yard links, the original nine-hole layout being the work of Tom Morris. Not a par 5 on the scorecard, but there are four par 3s in the final five holes.

A testing Dave Thomas (1996) rolling parkland with water in play on three holes around the turn, while the last green is protected by water too. Home course of European Tour star Connor Syme.

This splendid parkland celebrated its centenary last year. The River Ore is a threat down the stretch and helps to create a thrilling finale.

Home of the 10th oldest club in the world and a Willie Park Jnr parkland overlooking the town and the Forth – on a good day you can even see Edinburgh Castle from the dramatic 8th tee! Updated by James Braid in 1922.

26. Charleton
Designed by John Salvesen and opened in 1994 by former US President George Bush Snr, Charleton is an undulating parkland with coastal views. A new clubhouse is being built to replace the one that perished in a fire in 2020.

This Alister MacKenzie parkland in Dunfermline opened in the early 1920s and begins with back-to-back par 5s. Although it’s only just over 6,000 yards, it should be treated with respect.

An undulating parkland west of St Andrews, laid out by Old Tom Morris in 1903. It’s sand-based so is always playable and the star hole is the par-3 15th, one of Fife’s most demanding shorties.

Interesting modern parkland – it opened in 2001 – which is maturing nicely and boasts USGA tees and greens. Excellent facilities.

A relatively short (6,200 yards) parkland managed and maintained by Fife Golf Trust. Originally opened as a nine-holer on the old Dora Coal mine site in 1991, but five years later opened as a full 18 by Sir Michael Bonallack.

He was born and brought up in Dumfriesshire and has been a sports journalist since 1996, initially as a junior writer with National Club Golfer magazine.

Chris then spent four years writing about football and rugby union for the Press Association but returned to be Editor and then Publisher of NCG before joining Golf World and Today’s Golfer as Senior Production Editor.

He has been freelance since 2010 and when he is not playing and writing about the world’s finest golf courses, he works for BBC Sport.

A keen all-round sportsman, Chris plays off 11 – which could be a little better if it wasn’t for hilariously poor lag putting which has to be seen to be believed.