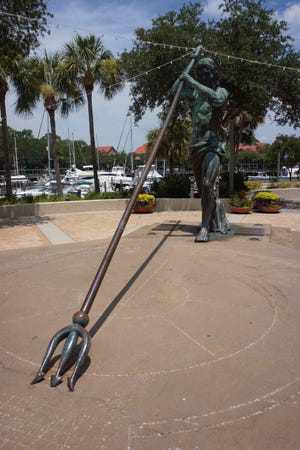 Savannah draws all the attention when it comes to weird and wonderful sights, but there are a few oddities around Hilton Head Island, South Carolina that are well worth seeing.

Hilton Head is a premier resort for golfers and nature lovers, but if things had been different it could have been stripped of its beautiful trees for lumber. That was certainly the intention when Charles Fraser was sent there by his family logging company to start chopping. At that time only about 500 people lived on the island – mainly farmers and oyster workers.

But Fraser was so fascinated by the size of Hilton Head that he asked his father to give him control of the island so he could develop properties on it.

After graduating from Yale Law School, Fraser founded the Sea Pines Company and began building world-renowned golf resorts and communities on the southern end of the island. Because of his love for the trees he was originally supposed to cut down, Fraser drafted agreements and restrictions that protected the trees and made them the focus of development.

Houses had to be neutral colors so they wouldn’t stand out among the trees. Winding roads and cycle paths drew attention to the trees instead of the buildings. And strict rules have been put in place that limit the size of trees that can be removed from a homeowner’s property.

To honor Fraser’s role in the construction of Hilton Head, two enchanting sculptures by Savannah artist Susie Chisolm were unveiled in 2011 at Compass Rose Park at 4 St. Augustine Place, Fraser casually strolling next to an alligator.

The reference for this unusual pairing comes from a photo published in the Saturday Evening Post for a post on Sea Pines in 1962. The photo captured Fraser, then 32, happily walking an alligator while showing off his new development.

Fraser died in 2002 when his 28-foot Sun Dance yacht exploded, dumping him, his wife, daughter, and others into the water where he drowned, but his legacy as a tree-hugging real estate mogul is forever in bronze. Nobody knows exactly what happened to the alligator.

If you have the time, there is another impressive statue in the area that is well worth a visit.

Hilton Island may be a popular golf vacation destination for us mere mortals, but even the Roman god of the sea appreciates the airy waterfront restaurants and fashionable shopping. Not really, but you can still see an impressive display of King Neptune looming godlike in front of Shelter Cove Harbor at Palmetto Dunes at 13 Harborside Lane.

The bearded statue stands on top of a 7-meter diameter sundial, the trident of which hits the ground – as if it were impaling the octopus – and acts as a gnomon that casts a shadow on the dial. Numbers around the dial accurately indicate the month and hour of the day.

The King Neptune sundial was sculpted and installed in 1983 by artist Wayne Edwards. It was cast in Princeton, New Jersey and then shipped by truck (no sea?) To Hilton Head Island.

In an act of scientific engineering with a history that can be traced back to Ancient Egyptian and Babylonian times, careful measurements were taken to ensure the 1 ton statue was facing due south by aligning its trident with the north star and Ursa Major. The sundial is fully functional and while it doesn’t show the exact minute, you can still use it to make sure you don’t miss your start time.

Christopher Berinato is the author of Secret Savannah: A Guide to the Weird, Wonderful, and Obscure.