I spent 3 nights at a luxury golf resort in a $100 billion Malaysian ghost town. I can see why it’s popular with golfers – but I still wouldn’t go back. 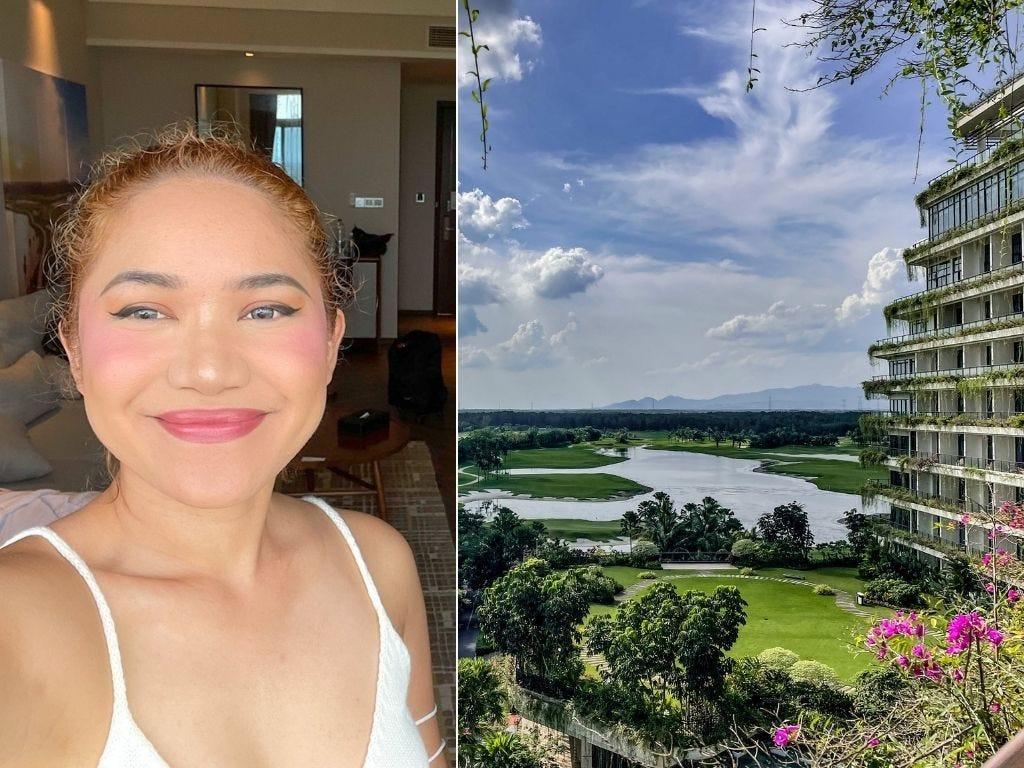 Forest City is a luxury development in southern Malaysia. Experts say the estate is a ghost town. 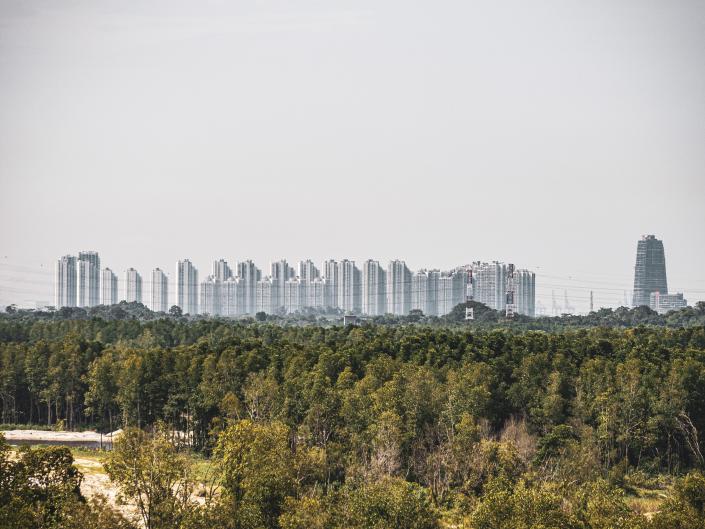 Country Garden is the biggest property developer in China, and Forest City is its biggest development. It’s also one of the most controversial developments in Malaysia’s history.

Construction on the $100 billion project started in 2015 and is expected to be completed in 14 years. It has lauded itself a “living paradise” and a “green, futuristic city.” But some experts believe Forest City is a “time bomb,” as its rapid construction has wreaked environmental havoc on Johor Bahru’s coasts.

Today, the development is widely considered a ghost town, with as few as 500 residents in 2019. When I visited Forest City earlier this month, an expert, who declined to be named for security reasons, told me several thousand people currently live in the estate. The expert estimated that the city is at less than 5% capacity.

While the pandemic slowed tourism and property sales in the development, construction has not stopped. Three of the eight phases of its development have been completed.

When I visited the city, it had a sales gallery, a mall, an international school, and two resorts, but very few businesses operating. Plots of land have been reserved for the development, but it is unclear if these projects will continue.

“Forest City was not built solely as a residential development,” Country Garden told me in an email.

“Forest City carries out overall urban planning and construction in accordance with the concept of industry-city integration to ensure future commercial value and sustainable development,” the company added.

There are two resorts in Forest City, only one of which was open during my trip. 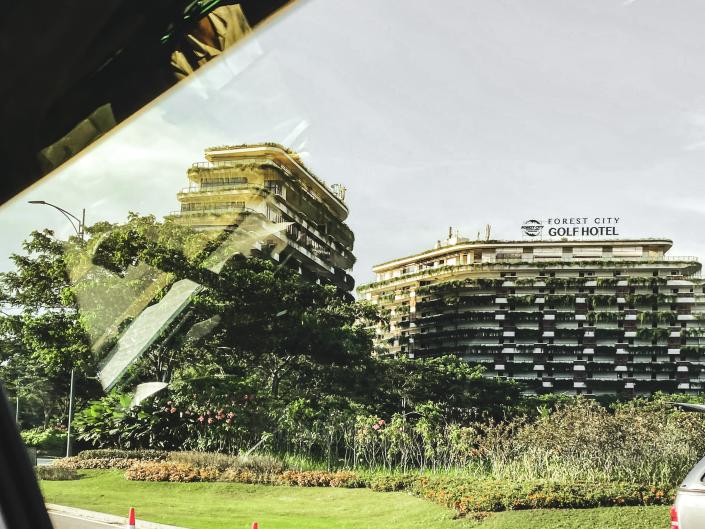 Forest City Golf Resort was launched by Country Garden in 2019 and continues to be managed by the developer.

In the lead-up to my trip, it was difficult to find up-to-date information on the resort. When I tried calling the phone numbers on the resort’s website, I received no response, but I did manage to book my stay online.

I took a ride-hailing service from the airport to the resort and accidentally ended up at the only other hotel in the development, Forest City Marina Hotel. The hotel’s tinted doors were locked and the only other person in sight was a security guard. The streets were eerily quiet. A local who worked at a nearby apartment complex told me the resort had been closed for two years and should be reopening in the next few months.

The resorts were 10 minutes away from each other, so I called another car to the resort.

On first impression, the resort was grand and luxurious. 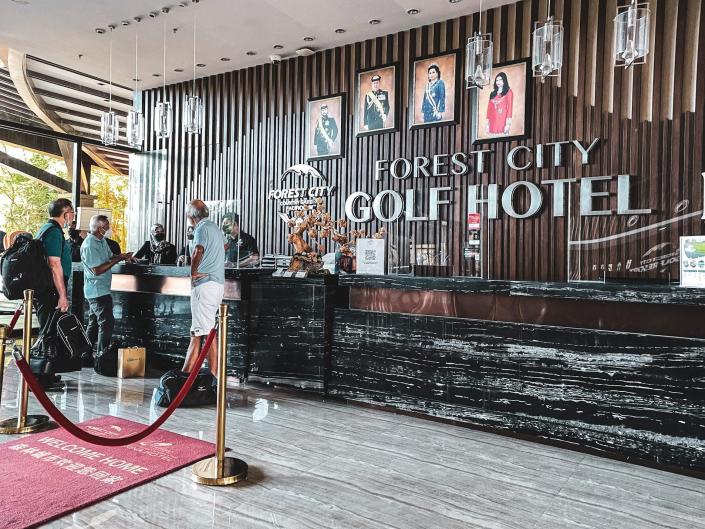 I booked a deluxe suite for three nights, which cost 458 Malaysian ringgit ($104) per night.

Insider paid for my stay in full, as is standard with our reporting trips.

One guest who I met at the resort said he enjoyed staying there to play golf because it’s “value for money.” He said he traveled to the resort with several friends from Singapore.

The resort has great reviews online too, with a 4.4 star rating on Google — one user said it offered the “best golf experience,” while another said he found the views from the resort “superb.”

The resort was the busiest place in the entire estate, and its main attraction was its golf course. 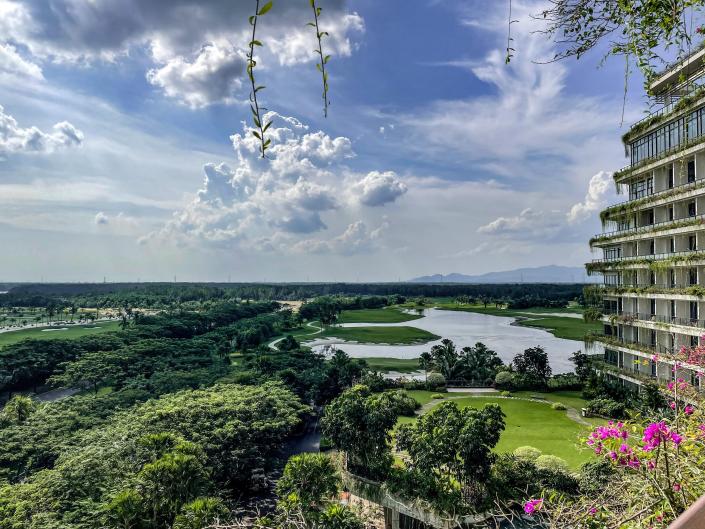 The resort has two courses, which span 69 and 74 hectares each. The courses were designed by Liang Guokun and US golfer Jack Nicklaus respectively. Country Garden said the resort is slated to build a third golf course, and that it receives 100 to 200 guests every day.

While the resort was busy with golfers from around the region, the rest of the estate was empty.

Overlooking the golf course was a massive swimming pool. 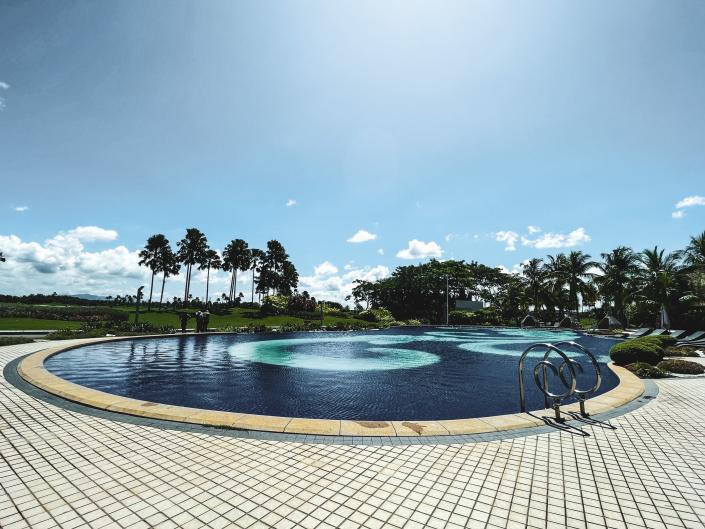 I saw very few people using the pool during my stay.

Up in my room, the balcony was so big that I initially wondered if I was in the right room. 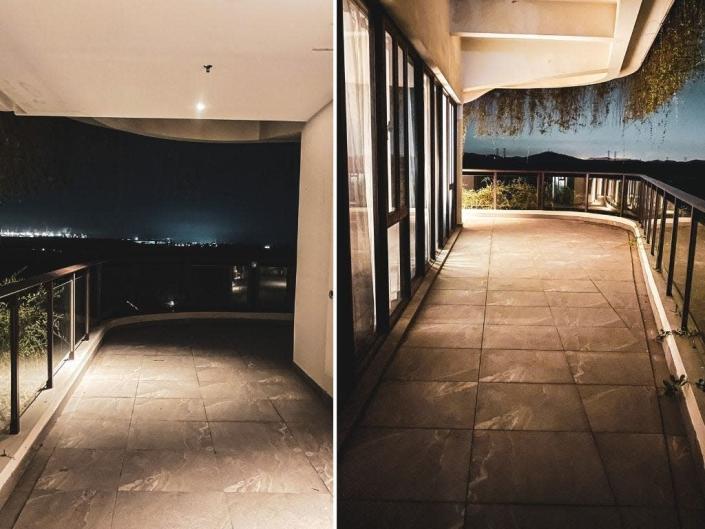 My 169-meter-square (1,819 square feet) deluxe suite had a panoramic balcony. From it, I could see the main residential area of Forest City stretching out in front of me.

The suite had a big living area with a divan sofa. 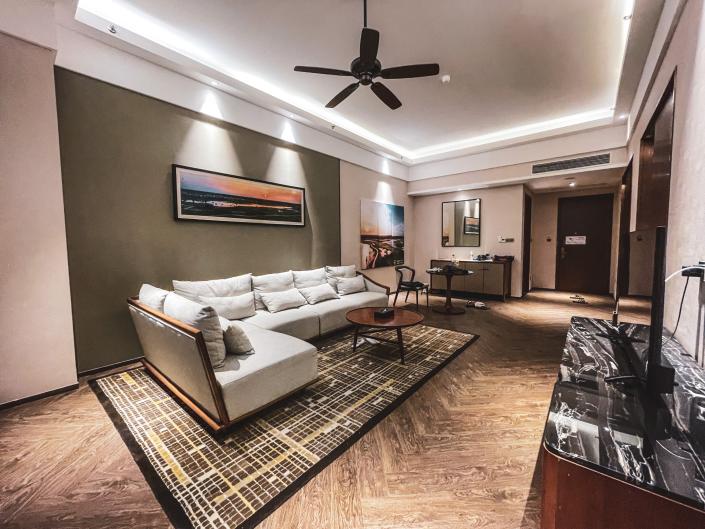 The space, which was furnished with wood and marble, looked luxurious.

The bedroom was sparsely furnished but comfortable. 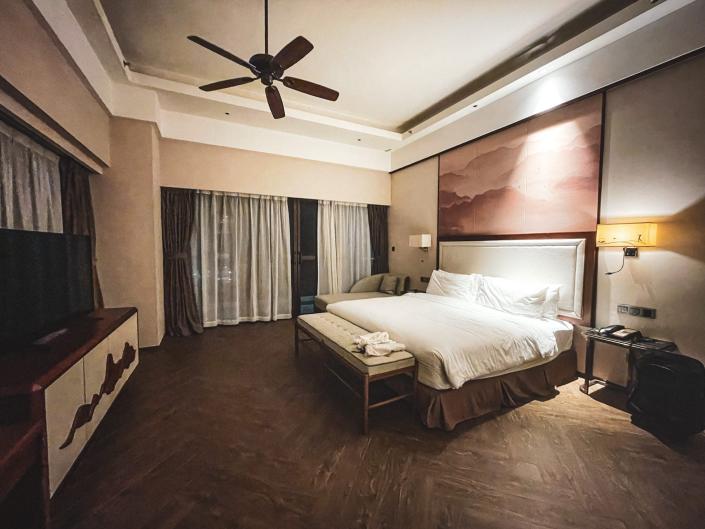 I slept well all three nights, and it was quiet throughout the day.

The bathroom had a spacious shower and a toilet with a bidet. 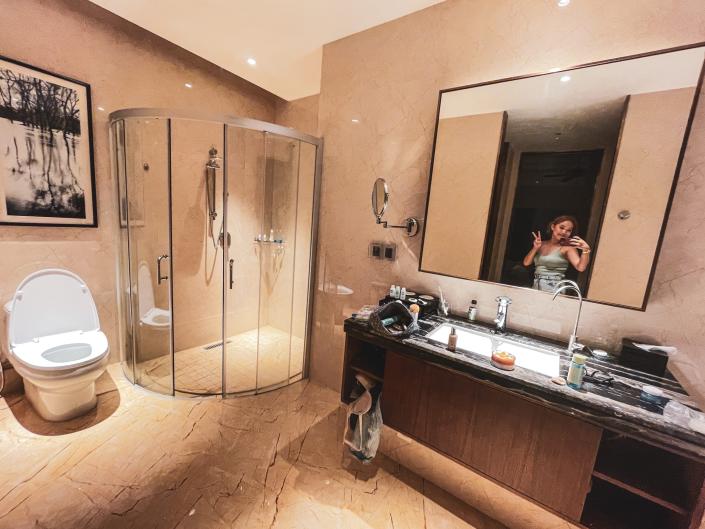 The water heater and pressure worked well. The soaps were generic but for the price I can’t complain.

There was also a large Jacuzzi in the bathroom, which was initially my favorite part of the suite. 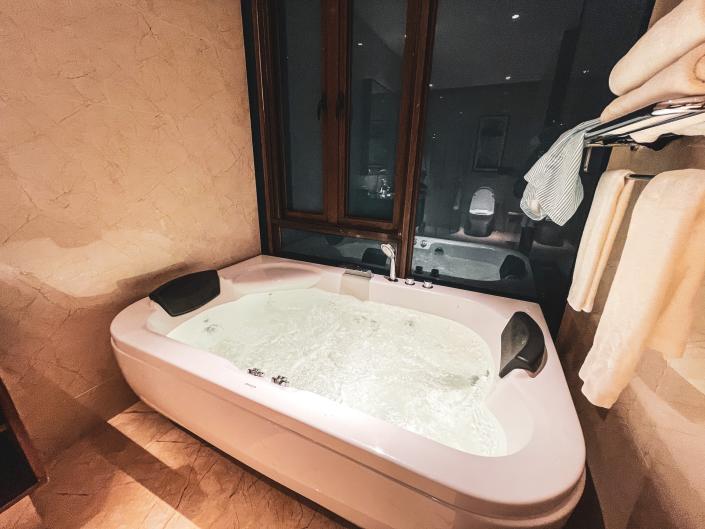 The Jacuzzi was huge. I took a dip one evening and felt relaxed after a long day of photoshoots.

But the closer I looked at things, the more a different reality started to emerge. Grime and rust, for example, had begun to build up on the sides of the Jacuzzi. 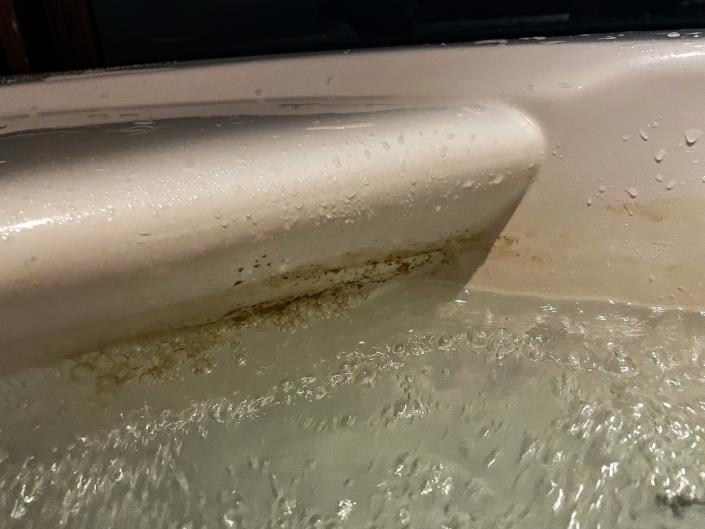 I called the front desk twice to ask if someone could come service the Jacuzzi and was told they would call me back. When I asked the resort to comment on it for my story, a representative told me a technician had been sent to my room and that a receptionist had called me several minutes later.

I wasn’t aware of either of these actions by the resort.

For three days, I ate nearly every meal at the the resort’s dining area, but not by choice. It was just too difficult to leave the resort without personal transport. 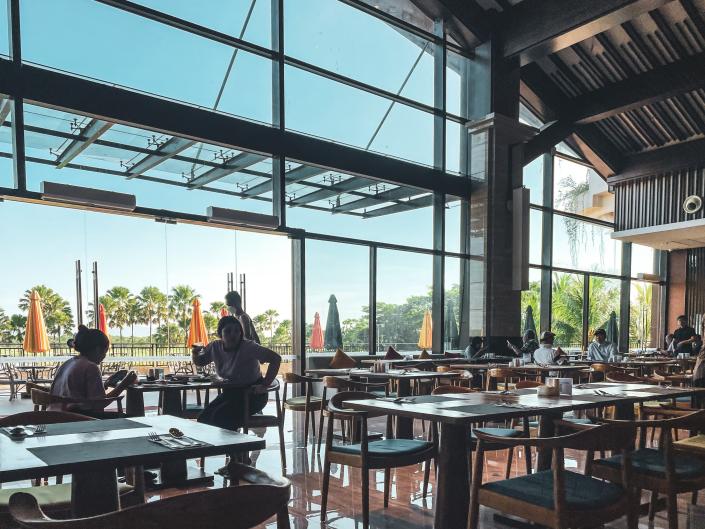 Tee-Off Restaurant, the only dining option in the hotel.Marielle Descalsota/Insider

There were no convenience stores to be found in Forest City, nor was there any food delivery service — I waited for two hours for my order to be processed to no avail. There was only one grocery store, and it was difficult to get to.

On my final day, a rat ran through the dining area. A guest shrieked when she saw it, and a staff member took off running after it.

Country Garden told me “such incident has never happened before” and that it will increase pest control from once to twice a week.

On the second day of my stay at the resort, there was a blackout. There was no electricity in the resort for around five hours. 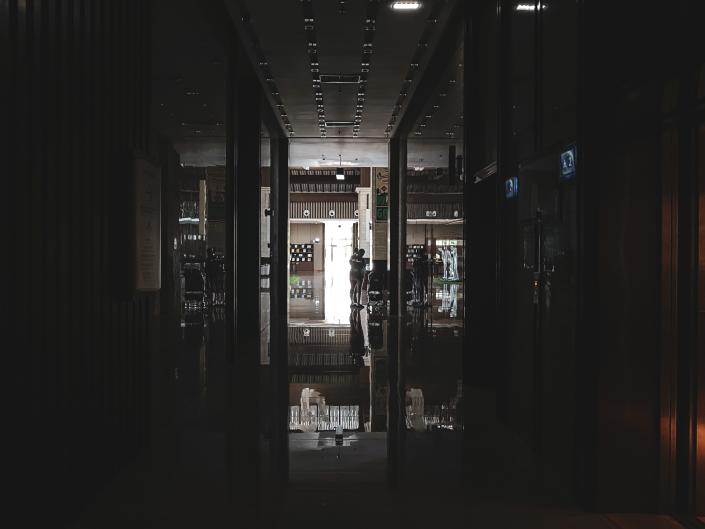 One hotel staff member told me it was the first time in three years of employment at the resort that he’d experienced a blackout. The hotel gave me free lunch as compensation.

Country Garden later told me its electricity supplier, Tenaga National Berhad, had upgrading works on the day of the blackout.

The hotel’s wifi connection was bad everywhere in the hotel, from the suite to the lobby.

When I tried leaving the resort, I couldn’t find a ride. I called five local cab companies, who all said they had no drivers willing to come to the resort. Several ride-hailing services didn’t even operate in the city.

Finally, one staff member kindly offered to drive me around for a fee of 50 Malaysia ringgit ($11.30).

The resort seemed like excellent value for money at first sight, but by the end of my third day, I could see why the price was so low. 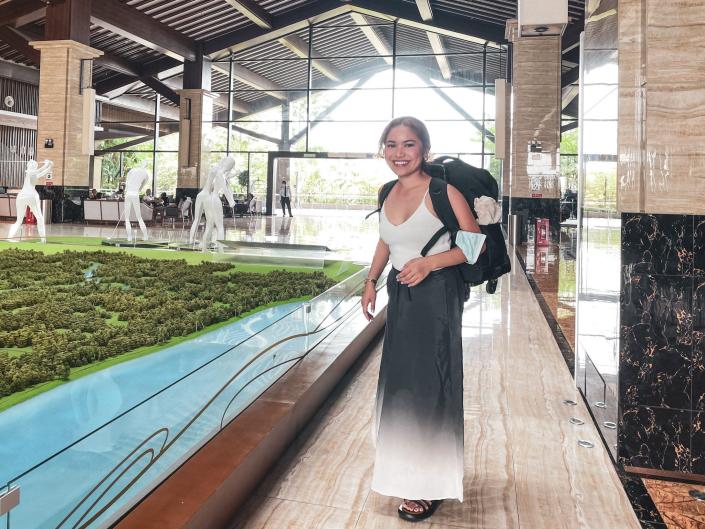 One of the few times I smiled at the resort.Marielle Descalsota/Insider

The staff was friendly and the suite was affordable, and I can see why it would appeal to the golfing set.

But to me, as a tourist who isn’t trying to spend the whole day on the golf course, there was no reason to be at the resort. It’s possible the resort will get better with time, especially as tourism begins to pick up. But for now, it’s not a place I want to go back to.

Read the original article on Insider