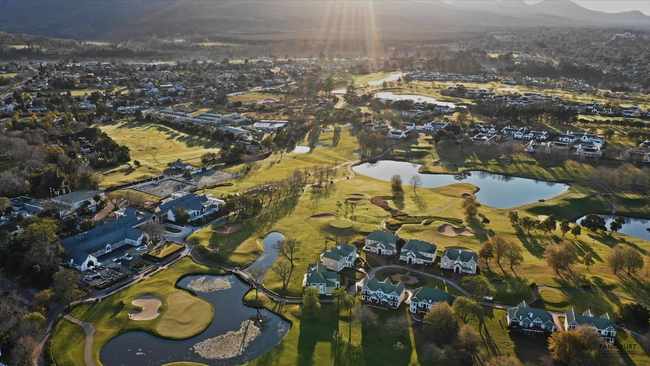 From the beaches of Plettenberg to the holiday feeling of picturesque Knysna to the natural wonders of the wilderness and much more, you could romp around for weeks with surprises at every turn.

But there are also some of us who go to the Garden Route for one reason and who largely don’t know the rest of the Western Cape’s menu.

It’s more than a golf estate. It is a community, a large family of people united by the appreciation of the most beautiful things in life.

Fancourt is a very special place, even in the midst of the natural abundance of the Garden Route. As soon as you drive into the property, a feeling of occasion arises. The clubhouse, which serves the Outeniqua and Montagu courses, is cave-like, with plenty of corners to sit and chat with the family or a golf four-ball.

Choices, choices, and even more choices

In addition to the club lounge, there are three dining facilities that cater to both casual and impeccably stylish guests who want to turn things into an occasion.

The clubhouse is a hub of activity, with the soundtrack of happy children comfortable in their surroundings.

For the wealthy, the Manor House with butler service is a truly majestic experience. The former home of British engineer Henry Fancourt White from the 1850s, the Cotswold villa style residence is a bespoke offer where nothing is impossible. The general service and attention to detail elevate Fancourt to its world-class billing as a hotel, not to mention the golfing opportunities.

For the pampering of tired limbs, the hotel’s wellness area is easily accessible from the clubhouse, and there are hiking trails for guests who want a break from golf – or who just want to really earn the subsequent therapeutic call to the well-equipped spa facilities.

Three of the best

There are three championship courses in Fancourt, each of which requires your full attention to be beaten. Outeniqua is an excellent parkland stretch that leads to the fascinating mountains from which it takes its name. Though some dare to call it the easiest of the property’s three golf courses, Outeniqua shows its teeth with subtle bumps, a deceptive wind lashing off the mountain, and massive putting surfaces that value accuracy.

The Montagu Course demands respect from everyone who enters it. There is more than a touch of Augusta National in its parkland. The grass looks even Masters blazer green, and the golf skill test is just as straightforward. Montagu is long and uncompromising, with the sweeping fairways often requiring medium or long iron access to the greens that are on the fast side.

You just have to take your A-game to a track that even professional golfers consider to be one of the toughest tests in South Africa. The 16th hole was designed with a view of Augusta’s 12th hole, with water, carefully placed bunkers and a seemingly small target that welcomes the golfer on their final stretch of the hole.

If you’re a guest at the Fancourt Hotel, you might be lucky enough to be offered one of the limited slots for The Links, South Africa’s top ranked golf course.

Hosting an unforgettable President’s Cup duel that ended in a famous duel between the American team of Jack Nicklaus and the international team of Gary Player, led by Tiger Woods and Ernie Els respectively, The Links at Fancourt are an absolute must for the enthusiast Golfer.

There are limited tee times for hotel guests as The Links is something special. It works according to its own schedule, in which time stands still and nature speaks. Golf itself is overwhelming and requires the most challenging shots in your arsenal. A local caddy is gold in Fancourt, but even more so at The Links. The design fools the uninitiated eye with subtle changes in height. In addition, you never seem to lie flat on the fairways, so concentration is required.

In this modern world of constant noise and news, The Links is a temporary pause button. It’s an escape from Fancourt and a step into golf nirvana. Sitting in the simple stone-walled halfway house in the middle of nowhere reminds you how special the place is.

The brutal way back to the clubhouse leads to a bunker brutally referred to as The Coffin as it can obliterate any momentum. Fittingly, the final par-5 hole climbs up to the clubhouse on a ridge. From the back tees, it’s an almighty crossing across the gorge before a final tap-in and welcome drink are served by expert links staff like Sipho Kalawe, eager to share your stories of suffering and glory from the sacred fairways hear.