For the owner of Utah Jazz, Ryan Smith, golf is a “safe haven” – except in the bunkers at the Utah Open 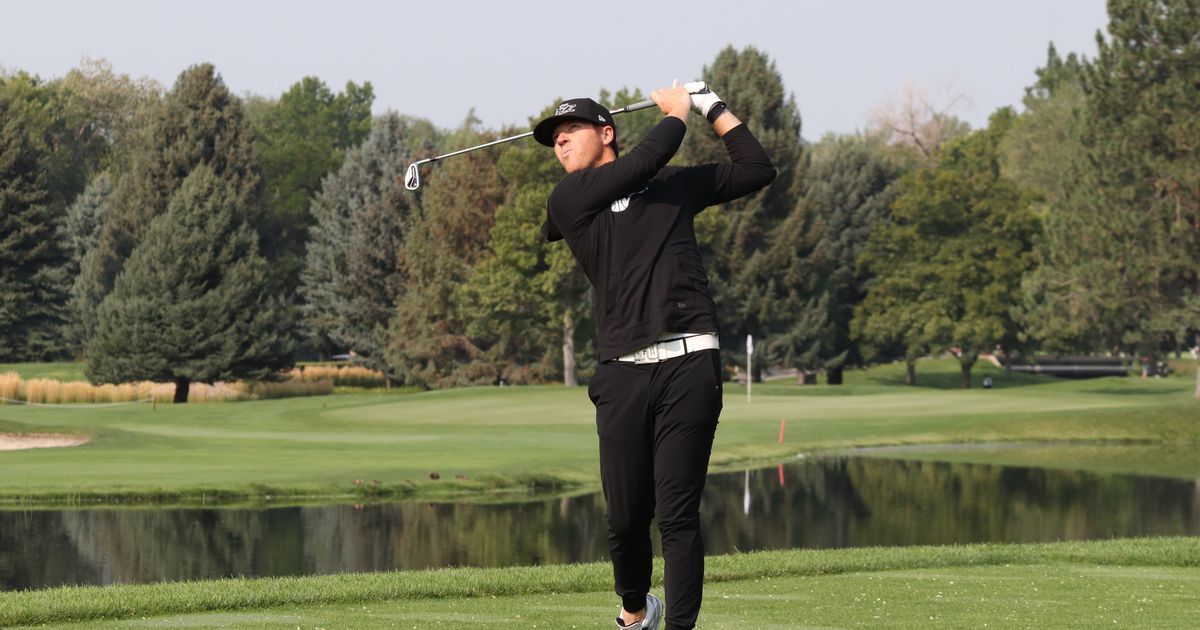 Provo • Ryan Smith’s shot looked good in the air, but the ball landed in the bunker just outside the # 11 green of the Riverside Country Club.

“Double”, announced the Jazz owner even before he picked up his T-shirt.

Smith’s dire prediction of a double bogey on the par 3 hole came true and caused another disappointing moment in the first round of the Siegfried & Jensen Utah Open on Friday at his home course, the Riverside Country Club. The strokes that added up to his 2 over par 74 ranged from spectacular to amateurish on what Smith described as “action packed” on a morning when Alpine 14-year-old Kihei Akina scored a 67.

Smith certainly showed a glimpse of the talent that led PGA Tour player Tony Finau to refer to him as “one of the best amateurs I have ever played with”.

The third player in the third group next to Riverside’s No. 1 tee on Friday wore a black hoodie with the jazz note on the front; a black jazz hat; black, straight-cut pants and white, high golf shoes in the design of basketball sneakers. While looking for his drive at # 2, a rules officer found a stray ball.

“That’s not mine,” said Smith upon inspection. “Mine has a jazz logo.”

After finding his ball, Smith played a pretty wedge shot over a tree but missed his birdie putt. He played the first six holes in 2 under and also produced a great stretch on the back nine.

Smith’s 300-yard drive and 260-yard shot with a fairway wood resulted in an eagle at number 15. Those “3” and three birdies were offset by two double bogeys and three bogeys, largely due to his problems in bunkers that was struck by three rainy days. Twice it took him two shots to get out of the sand.

Smith was dissatisfied with the preparation of the bunkers, judging from his discussions with two rules officials during the round. However, in a post-round interview, he blamed himself and responded remarkably well to the double bogey at number 11. He played the next four holes in 3 under par.

“I’m just not in golf shape,” said Smith. “I can’t hold it together for 18 holes. … It catches up with you in tournament golf because it is so different from normal golf. “

His opening lap 74 left him a little disappointed, but he still declared the morning to be a victory: “I feel like I’ve just been on vacation for three days.”

That’s because of the variety that Golf gives to his business life as Qualtrics CEO and NBA franchise owner, in addition to being a father of five. In a pre-tournament press conference, Smith spoke about the nature of a game that offers a series of intermittent conversations while demanding a player’s full attention. “I mean, golf is the ultimate balance, right? You can hang out with people you normally wouldn’t spend time with, ”said Smith.

He told the story of playing with a nameless CEO he always wanted to meet. “There’s no scenario in life that we’d get four hours together,” said Smith. “We talked about everything, almost to the point that we had nothing more to discuss.”

(Jesse Dodson | Fairways Media) Utah Jazz owner Ryan Smith shot a 2 over par 74 during the opening round of the Utah Open Friday at Riverside Country Club in Provo. Qualtrics founder and tech billionaire says golf is for him a “safe haven” and the key to his business success.

Smith continued, “And I look at my life and I look at the people and the memories of and who I hang out with and whom I have crossed with. Much of this comes from a point where the game of golf made me do it. … Often they are people you didn’t know you needed in your life. “

He always enjoys the solitude of picking up half a dozen balls, driving to a vacant green in Riverside, and chipping (his short game is excellent).

“At the same time, it’s my yoga,” he said. “This is actually the place I’m thinking of. … For me it’s noise canceling. It actually hides everything else. In today’s world, there isn’t much you can do to completely unplug the connector. … There aren’t many safe havens, and golf is really one of them. “

That was true of Smith when he was 14. The day he learned of his parents’ impending divorce, he went to work collecting range balls at the Provo public facility, then called East Bay Golf Course.

Smith later moved to Riverside, which is opposite the original Qualtrics location across University Avenue. “We have been on a 20-year journey with the company,” he said. “I always say it would have taken 14 if I hadn’t lived across the street from a golf course.”

To play all three rounds of the Utah Open, Smith will likely have to shoot in his 60s on Saturday to make the 36-hole cut. He sees the Utah Open as “definitely a major” on his golf calendar. The others? This may be the only time Riverside CC appears in the same sentence with Pebble Beach Golf Links (home of the PGA Tour’s AT&T Pebble Beach Pro-Am) and The Old Course in St. Andrews (host of the Alfred Dunhill Links Championship).

The difference between the Utah Open and these other events is individual accountability. In a Pro-Am format, Smith would have become a very valuable teammate on Friday while brushing up on his bad holes.

At Dunhill Links 2018, “we had a real chance to win,” said Finau, recalling the team’s fourth place in the Pro-Am final. “So he’s not only a great weekend golfer, he’s also a good golfer under pressure.”

Smith said of the St. Andrews bout, “There is no better feeling in the world.”

Friday’s round didn’t bring back those memories, but Smith enjoyed a pairing with friend Shane Brady, 73, and University of Utah golfer Braxton Watts, 78, a freshman from Farmington. Smith provided steady comment. When he failed his tee shot on par 3 number 17, he said, “Get over the provo [River]. “

The low flying ball cleared the water and rolled onto the green 15 feet from the pin, although Smith missed his birdie chance.

Watts did not play well but he will get another 18 holes with Smith and have a chance to make a better impression on Saturday. Apparently everyone who plays with Smith has a story to tell.

Finau’s favorite is over a 2017 lap at Pebble Beach, where he pointed out a house overlooking the 18th fairway. Two years later, while Finau was preparing for the US Open, Smith invited him to spend the week with him. Finau wondered where exactly Smith’s home was.

Smith replied, “Oh, I have that house on the right. You said you liked it didn’t you? “

But this property illustrates in its own way that everyone on the golf course faces the same problems – whether watching the waves on Pebble Beach or struggling on the sands of Riverside.