Golf was an interest from time to time – Loveland Reporter-Herald 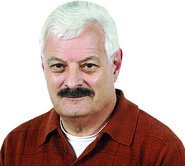 Some of my friends (and relatives) can’t wait for the snow to go away and pull out their golf paraphernalia and hit the next golf course.

I used to be like that too. In fact, from time to time (like some of you) I had to dig a golf ball out of a snow bank to continue a game.

Sharon was the first in our family to play golf, and she and some of her friends played for several years before I caught the virus.

When I was in my early 30s, I was on the golf course as often as possible.

A small nine-hole course was built in a former peach garden on sloping land in Orem, Utah.

It was a whopping $ 3 for green fees.

I used to hang out with Jerry, Sharon’s cousin Tonis’s husband, and we’d be on the course at least once a week for several years.

What I quickly noticed was that a different driver, a different putter, a different sand wedge, even different balls would certainly improve my game. Lord only knows how much I’ve spent on various gear changes to get a better player, only to find that even the fancy new stuff I stink it stank.

When the company I worked for moved to the Houston area, there was a nice country club in the community and the company took the bill for our membership.

Well that part was great. It was just the pitiful heat and humidity that stole the rose from its bloom.

Our sons became pretty good golfers and that stayed with them for a lifetime.

For me, it only took me about 20 years to realize that I would never be a good golfer.

When we moved back to the mountains in 2006, I knew there had to be a better way to pass the time than golf. I gave away my clubs and my car, in fact I think I found someone to take my golf shoes with. (Is there anything far worse than sticking your feet in shoes that have already broken in for another pair of feet? Scary.)

About 10 years ago Mike Jr. (an accomplished golfer) convinced me to go back to the game and gave me a really nice set of clubs – Ping I-2. I bought new shoes and a cart to take away the freebies.

Sharon’s sister’s husband, Pat, is a good golfer, lifelong golfer, and they came to visit. Pat didn’t bring his clubs, and when he went to the Mariana Butte Golf Course – well, he wanted to play.

I blew the dust off my gear, lent it to him, and he and our son Mike Jr. set a start time and went to play butte.

After Pat cracked a hole and added another hole-in-one to his loan, I thought about it. Let’s see – my course, my clubs and bag, my cart and my golf balls – I think I should at least have got a t-shirt for my troubles, right?

Well, that was pretty much the end of it for me. I’m a really good bad loser.

Another thing that cooled our enthusiasm for golfing on our Texas golf course was some wildlife we ​​saw from time to time, like the tiny deer in the area, the occasional alligators in some lakes, and ugly water moccasin snakes! We spotted one on an excursion who could sunbathe. It was about 8 feet long, black and eerie. That ended our fun that day.

However, I had a thought – don’t water moccasins usually appear in pairs – right and left?