Let the big mashie eat it! 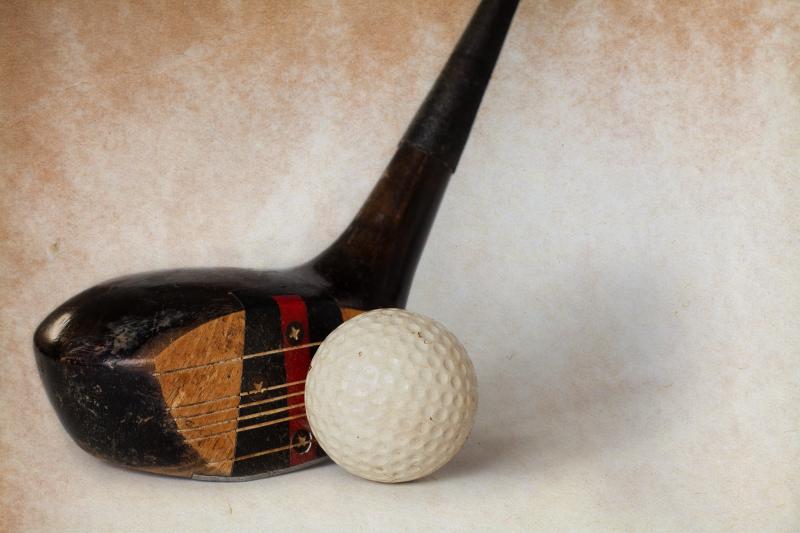 On Saturday, August 12, 1547 at 7:15 am Greenwich Mean Time, it was a mild morning on the links. The wind is calm, blowing about 40 miles an hour in your face, and you haven’t seen the sun in days. A salty mist is blowing in from the sea, and when you step to the first tee your kilt is flapping in the wind. It’s a great day for golf!

You take a lap with your boys on a course with no tree in sight. Tall grass, hills, and weeds are everywhere, and hitting a sheep with your drive is not a punishment. You kick to the first tee after a small sip and kick up some dirt and grass to form a small mound on which to place your feather-like ball to take off.

You put your feet in a wide stance and wear heavy leather golf shoes with small nails driven through the soles to give you traction. In your ungloved hands you hold your favorite club, a mashie that you carved out of a large piece of wood.

You look down the fairway, past the sheep, onto a long stick with an old kilt that could easily be called green by today’s standards, and then let the big mashie eat it! Your next shot is about 150 yards from the kilt, and since you don’t have a golf bag, drop all of your clubs (which you carried yourself) and look for your niblick.

Your Niblick shot comes to rest about 10 feet from the hole and you drop your clubs back to the ground. You take your cleek and putt for a birdie. But as fate will, your shuttlecock hits a “sheep pie” and you have to be content with a double bogey. You do this again for 11 more holes (18 didn’t become standard until 1857) or until you’re frozen in from wearing a kilt.

Golf was easy back then. If you wanted a new driver (mashie) you could carve it yourself, or if you were rich, have a craftsman carve it to your liking. In later years most clubs were made from two different types of wood.

The shaft was usually made of hazel or ash, the club head made of hardwood such as beech, sloe, pear or apple. They were put together using a washer or split method and then tied with twine.

Aside from mashie (driver), niblick (iron), and cleek (putter), clubs have been given other strange names. Wedges were known as “blasters”, four woods were “baffies” and two woods were “brassies”. In the 1800s, metal clubs came on the scene and the term “irons” came into play, along with certain irons called “Jggers” and “Sammys”.

To keep up, new golf balls were also invented because the old shuttlecock exploded when hit with a jigger or Sammy. In 1905, the modern golf ball was born with a hard rubber core that was pitted to improve spin and distance.

In 1908 the clubs were grooved to further improve the game and many wealthy golfers had their own clubs to aid them in various playing conditions. An example of this was that Walter Hagen had his own sand wedge designed with an elongated flange and concave face, which was later banned by the USGA.

Nowadays you can find almost every type of club, from steel to graphite to titanium, with every type of flex, grip and custom fit you want. Golf has come a long way since kilts and mashies were fashionable.

• Aluminum golf clubs were introduced to the public in the 1960s, but they were soon discontinued because the shafts were easy to bend, especially around a tree.

• In 1502, King James IV of Scotland had his own set of specially carved clubs made for him. Nor did he carry his own clubs during rounds of golf.

• Golf carts are a $ 200 million industry; Not only are they used on golf courses, but also in retirement homes, shopping malls, security companies, and airports.