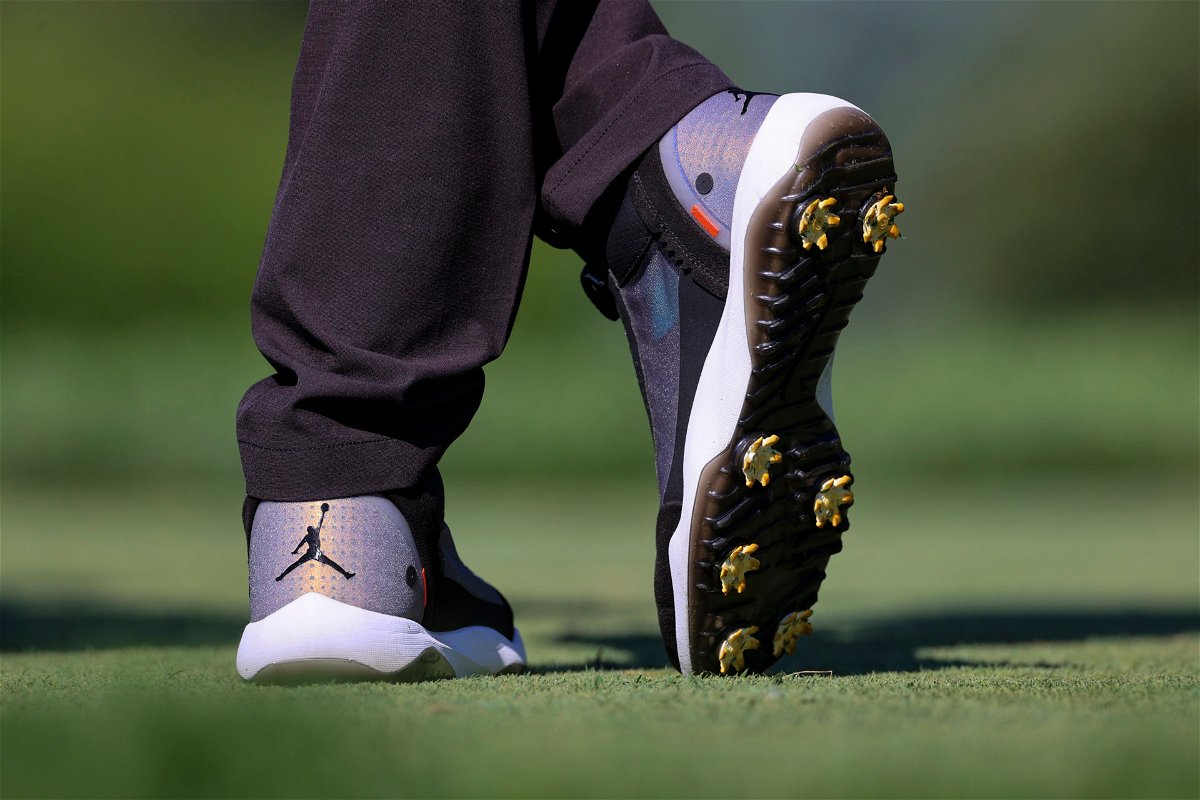 Bubba Watson is among the fashionable professionals teeing up at the 2022 PGA Championship this week. Currently, the two-time major championship winner is in the limelight, but not for his golf game. He is in the spotlight for the incredible apparel he donned during his practice round yesterday.

The American professional is famous for hitting huge bombs off the tee and for wearing colorful apparel. In fact, Bubba even has a pink-colored driver. The two-time Masters champion caught the attention of every golf fan at Southern Hills Country Club during his practice session on Tuesday.

Watson wore the amazing Nike Jordan XII G Golf Shoes. The all-white golf shoes have a black sole with a touch of blue and white. However, the shoe seems to match a shade present of the PGA Tour professional’s driver.

Being an Air Jordan edition golf shoe, it has Jordan’s usual number, 23, written on the back with the Jumpman logo. As a result, it makes the shoes even more special and fashionable. Not to mention, given Bubba’s charm and the ability to carry them, the fabulous golf shoes suited the 43-year-old professional well.

Anthony Kim, the Disappeared Golf Star, Once Revealed How His ‘Straightforward’
Dad Made Him Pick Golf Over Basketball

However, this is not the only time Bubba is seen showing off his Nike Air Jordan kicks on the golf course. The Florida native has been wearing the Jordan golf shoes on the PGA Tour since 2021. Earlier, he wore the Nike Air Jordan 4 golf shoes, which had an all-white top, and the sole or the bottom part of the shoes were green.

Contents show
1 The golf world has mixed reactions to Bubba Watson’s new kicks
2 How did Bubba Watson play at the 2022 Masters?

As soon as the pictures of Watson’s golf shoes hit the internet, golf Twitter was up in a frenzy. Fans from all over the globe started to react to the Tour professional’s shoes. Notably, the majority of the fans were not impressed with the Jordan-inspired golf shoes.

At the same time, a few of Bubba’s fans appreciated his kicks for his practice round and portrayed the same through their reactions.

Not even a little bit. Looks like some shit out of 1999

Anything Bubba does is 👎🏼. If it’s not promoting Bubba, Bubba is not into it. Bubba loves himself some Bubba.

He probably is running around telling people they make him run faster.

Those things are sweet don’t let anyone tell you otherwise

Shoes are okay I guess. That driver however…

How did Bubba Watson play at the 2022 Masters?

Watson did not have a great run at the Augusta National Golf Club in 2022. He ended the first major championship event of the season with an overall score of seven over par. As a result, Bubba finished in tied 39th position on Sunday.

Moreover, he carded a final round of one-under-par, 71 to finish just within the top 40 on the leaderboard. His final round of 71 included one birdie and one bogey on the opening nine holes. Hence, the 43-year-old moved out in even-par, 36. He made four birdies, one double-bogey, and a single bogey on the back nine to wrap up his 2022 Master’s campaign.