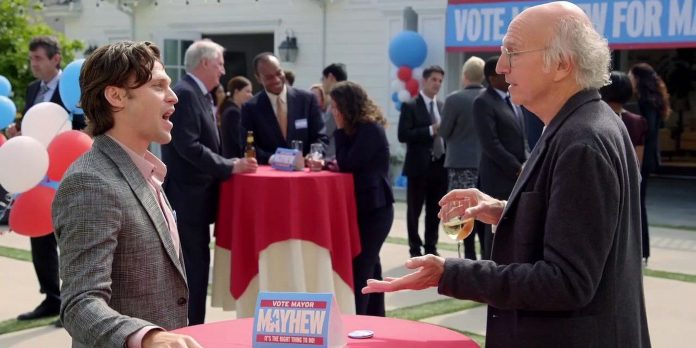 Larry David – the character – is always the best Control your enthusiasm when he has an opponent. In season 11, we mostly had a revolving door to temporary enemies, be it the manager of a sushi restaurant, his optician or Dylan O’brien -> actor. But David’s newest enemy, Irma Kostroski (Tracey Ullman) is so powerful that David calls her the most unattractive person he has ever met, such a lazy character that she has her name right in the title of the episode.

“Irma Kostroski” goes back to the first episode of the season, “The Five-Foot Fence”, because Kostroski believes Larry has found a solution for his Maria Sofia (Keyla Monterroso) Problem. If Kostroski can repeal the city ordinance that he has to fence his pool, he can avoid being blackmailed by Maria Sofia’s father. It’s an extremely cumbersome way to get out of this situation, which pops up the first time you read the Young Larry table, but as the Maria Sofia problem escalates, Larry clearly needs to take drastic action.

Larry and Irma are instantly divided when Irma refuses to speak during a speech by mayoral candidate Jimmy Mayhew (Terrell Clayton). However, when Larry realizes what power Irma has, he decides to get closer to the enemy. Larry decides to advertise Irma to be on her good side and continues to suckle in her, although we can see it killing him to do so.

RELATED: ‘Curb Your Enthusiasm’ Season 11 Episode 6 Review: Fantastic Cameos and Cringe Moments set up the second half of the season

Ullman plays Irma so that we can fully understand why everyone doesn’t like her. Larry says she’s like Dr. Frankenstein would put the worst qualities of several people in one person, and he’s not wrong. But Irma is just as loud as Larry, just as stuck as Larry and the opposite of everything that Larry stands for. Although Larry jokes about looking for love with Irma, we did see stranger relationships for Larry on the show. Irma could very well be a nightmare to get through, a real potential love interest, or more likely both.

COLLIDER VIDEO OF THE DAY

But “Irma Kostroski” is not only one of the best episodes of season 11 because of the title character, but also because Larry seems to be in conflict with almost everyone in this episode and indulges in it. Larry has problems with Asa (Jon Rudnitsky), the extremely special actor who plays the younger version of him in Young Larry. Asa is full of the worst tendencies, be it so deep in his performance, he cannot choose the right coffee cup, lets himself be called “Larry” on set and calls people who are not actors “non-professionals”. “He’s the kind of character Larry should destroy.

Larry even gets into an argument with Ruth Berman (Laura Julian), the ex-wife of the man who recently died of a heart attack at Larry’s Country Club. Larry says she doesn’t get “widow privileges” because, technically, she hasn’t lost her husband. But the reality is that Larry is just pissed off that Ruth took his golf practice time and the lobster he wanted for lunch. Larry’s conflict with the not-entirely widowed Berman leads the entire country club to turn against him, and you know an episode of Curb Your Enthusiasm is good when there are multiple scenes that feature a whole room of Larry David’s people strange but somehow accurate view of the world.

Larry’s antagonistic stance is also worth its weight in gold in smaller scenes. For example, when he learns that Susie (Susie Essman) and Cheryl (Cheryl Hines) are part of a book club that reads “The Sound and the Fury”. There’s no real reason for the scene, but it’s just a good excuse to make Larry laugh at this book club for reading Faulkner.

But more important is the return of Richard Lewiswhich was originally not due to appear this season for medical reasons. It might seem like a small gig, but it’s great to have Lewis back. Especially in the opening scene of Jimmy Mayhew’s speech, the back and forth between Larry and Richard is wonderful, and you can tell that these are just two friends hacking each other when Larry asks, “When are you going to die?” This scene is Larry’s way of undermining the sheer joy of having Richard back on the show, a brutal joke that almost comes as a surprise to Richard and really seems like Larry’s way of saying that he loves to get his boyfriend back on the show even if only for a few scenes.

The best episodes of Curb Your Enthusiasm also build to some impressive conclusions, and “Irma Kostroski” certainly doesn’t fail on that. Larry decides not to vote when he and another person standing in line decide they’re going to cancel each other so they should just go home. It turns out that this decision actually changes the future of Santa Monica politics, which in turn results in Larry being booed out of a room, a perfect ending to an episode about Larry basically giving everyone, with which he comes into contact, hits the head.

It’s not just Larry David finding his adversary in Irma Kostroski, or his ability to piss off almost anyone he meets that makes this perhaps the best episode of the season. It’s also the episode’s ability to just let Larry be who he wants to be. There are some great minor moments throughout the episode that gives us some brilliant Larry isms that absolutely resonate. For example, Larry’s refusal to wear pins because wearing a pin doesn’t change anyone anyway, or Larry’s statement, “I hate people individually, but I love humanity,” which almost looks like it could be the thesis of the entire series.

15 Essential ‘Control Your Enthusiasm’ Episodes To Watch Before Season 11

With Season 11 around the corner, let’s jog our memories.

Ross Bonaime is the weekday news editor at Collider. He is a Virginia-based writer and editor who has written on all forms of entertainment for Paste Magazine, Brightest Young Things, Flickchart, The Free Lance Star, and more. He has an unhealthy obsession with theme parks and the Criterion Collection and will defend the Lost Final until his death. More at RossBonaime.com.