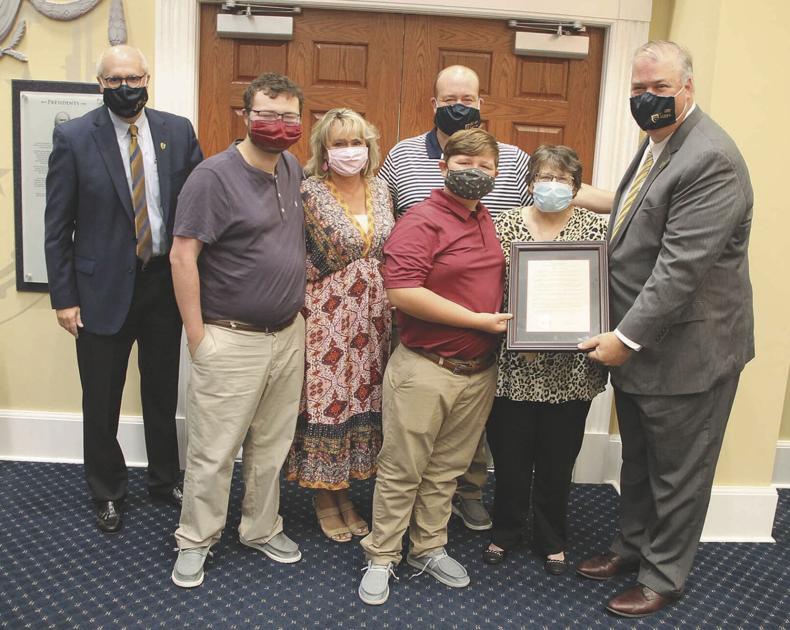 MURRAY – Murray State University’s Council of Regents, at its quarterly meeting on Friday, passed a resolution honoring the late Staff Regent Phil Schooley and approved the renaming of an annual staff award for him.

The board first approved a resolution in honor of Schooley, who passed away unexpectedly on August 15. CEO Eric Crigler noted that Friday’s meeting was the first meeting in more than 12 years that Schooley had not attended. Schooley, the longest-serving regent, began his term on the board on July 27, 2009 and was elected to an unprecedented fifth term earlier this year.

Murray State President Bob Jackson thanked Phil’s wife, Virginia, their son Brian, and the rest of the family for sharing Schooley with the university for so many years. As Crigler and Jackson hugged Virginia and handed her a framed copy of the resolution, the entire room burst into applause.

Following the resolution in honor of Schooley, the board also approved the renaming of the university’s Staff Excellence Award. Crigler said the award was launched in 1986.

“The awards are based on four categories of regular employees represented by the staff convention,” said Crigler. “To be worthy of the honor, the selected people must be perceived as competent. They must also show in some way a special effort, unique contribution, or unusual level of commitment or service. … Mr. Schooley served the Personnel Congress faithfully until he passed away prematurely on August 15, 2021. He was kind of known for that, and it’s good to be known for that. “

Crigler said Schooley himself received the award in 2011 and, since he embodied the characteristics of the Staff Excellence Award, it is most fitting that the award be named after him. The Personnel Congress unanimously approved this name recommendation on Wednesday, September 1, 2021 for submission to the regent’s quarterly meeting. “

The board heard a report on enrollment and whereabouts from Vice President for Student Affairs Don Robertson and Director of Institutional Effectiveness and Strategic Planning Renee Fister. Before talking about the fall numbers, Fister said enrollments in the summer of 2021 were up 6% from the previous summer, the highest number in 10 years. She said the credit hours are also closely in line with this, increasing 8%.

Fister said preliminary fall enrollment numbers were unchanged from 2019 and about 2% higher than 2020. Although the number of enrolled Kentucky residents has decreased slightly since last year, students from outside of Kentucky have not, she said.

“We’re a little bit down in Kentucky, and you can see great growth in Out-of-State,” she said. “It’s about 2%, and you (might think), ‘Well, that’s not great,’ but 2% is a great sense of growth when you talk about (out-of-state numbers).”

Regent Robbie Fitch asked if this surge in enrollments abroad was due to additional recruiting efforts. Fister pointed out that employees in all areas continue to recruit aggressively, so there isn’t necessarily more pressure on potential out-of-states than everyone else.

“We recruit morning, noon and night, wherever we go,” she said.

“Illinois is a very good state for us, and that’s why we’ve really benefited from Illinois,” said Robertson. “So it wasn’t up to (additional recruiting efforts). We’ve done the same amount of effort in our state and 18 counties (in the Murray State designated service area), and probably more in our 18 counties than ours outside of state. So it’s a balance. We are very attractive to foreign students because of our study and scholarship programs. “

Jackson said Illinois is the No. 2 state in the country when it comes to college student exports. He said California was # 1, but that’s because there aren’t enough places available in California’s colleges and universities. He said students from Illinois wanted to come here, and this may be due in part to the removal of outside fees and changing scholarship models from Fall 2019 to be more in line with state prices.

Fister noted that the number of Tennessee students and graduates has also increased, and there has also been a leap in enrollment for international students.

“There is one thing I would like to address as out-of-state; that includes our international students, ”said Fister. “From last year to this year, we increased the number of international bachelor’s degree programs by almost 38%. This is also reflected in this increase. “

Fister said it was always a challenge to work with ongoing students to get everyone to return each year, and she said there were some who didn’t come back this fall. She said there could be many personal circumstances they faced over the past year that resulted in their not returning, but the university will continue to seek these students to bring them back for the spring.

“It’s just a very tough time for a lot of people,” she said.

Fister also reported statistics on current college students, saying 66% of college students are Kentucky residents and 113 are represented out of 120 Kentucky counties. One notable fact that received a lot of attention from the regents was that 44% of students are the first in their families to attend college. Fister also said that 48 states as well as 50 countries are represented among the student population.

The Board approved the designation of the Equine Center on College Farm Road as the Hutson School of Agriculture Rudolph Equine Education Center in honor of James Rudolph. He is a former regent of the faculty and founded the MSU Equestrian Teams in the early 1980s.

The Board approved the designation of the Golf Training Facility in honor of former golf coaches Buddy Hewitt, Eddie Hunt and Velvet Milkman, who is from Murray.

The Board of Trustees awarded the Murray State Foundation Board of Trustees, Jerry Shroat, an honorary doctorate in humane letters at the opening ceremony in December. Jackson said Murray State has awarded 59 honorary doctorates since 1968. Faculty’s regent Melony Shemberger noted that she often disapproves of the honorary doctorate, but in this case, Shroat’s frequent student interactions have an educational aspect and she thought it was well deserved. Regent Leon Owens added that he believed the candidate was well examined and the process was fair.

· The Board of Directors elected David Eaton as Dean of Arthur J. Bauernfield College of Business. Eaton has served as the interim dean since Provost and Vice President of Academic Affairs Tim Todd left the office of dean in August 2019 to serve on an interim basis in his current position. Todd was appointed permanent provost in March 2020. Shemberger, who teaches journalism and mass communication in the College of Business, praised Eaton, saying she never considered him an interim dean because he cared so much about the faculty and was very attentive to their needs.