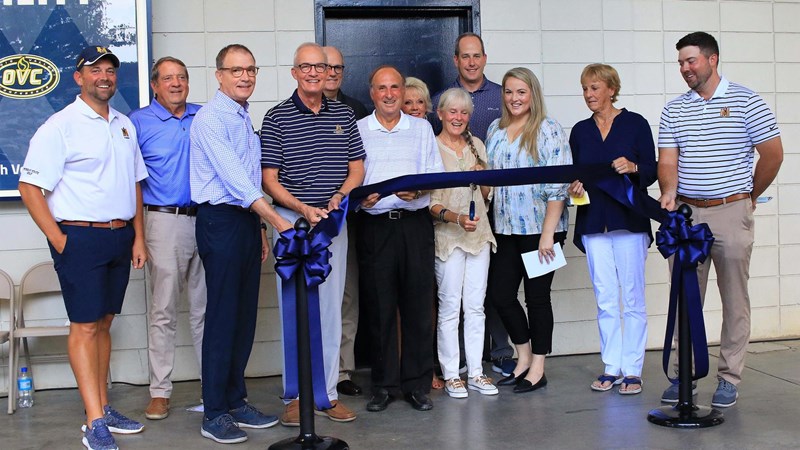 Supporters and friends of Murray State’s men’s and women’s golf programs gathered at Roy Stewart Stadium (Aug. 28) to enjoy the grand opening of the Racer Golf Training Facility, the first on campus to be enjoyed by any team.

With multiple donors, the Racer Golf Programs now have a convenient indoor facility that allows student athletes to maximize their skills through the Foresight Sports System, the most complete all-in-one virtual golf training in the game. Racer golf students will be able to improve their swings through science and keep up with other programs that use this technology. A putting green and putting lab help players shave their strokes. With an indoor facility on campus, racers can escape the cold and wet weather that previously prevented training when playing at Miller Memorial Golf Course was the only option.

The $ 150,000 raised on the project represents a step forward in meeting all of the objectives of the Investment Master Plan for the Murray State golf teams.

The facility is also a way to appreciate the rich history of each Racer program through stunning information graphics on the walls of the room. At the top of the list are the three head coaches, who together have led the men’s and women’s programs for an unbelievable 81 years. Buddy Hewitt, Eddie Hunt and Velvet Milkman. Hewitt founded the men’s team in 1961 and led it for 41 years until coach Eddie Hunt took over the Racers and ran them for the next 20 years before retiring in May. Milkman, the only coach in women’s racer golf history since the program began in 1993, has won 12 Ohio Valley Conference championships, the largest number of coaches in Murray state history.

The other graphics in the facility highlight every player who has ever played for Murray State. The list includes 293 players and 97 for the women’s team. There is also an area that focuses on former racer golfers who have reached the highest levels in the LPGA and PGA tours, including players Moa Folke, Linette Holmslykke and Lee-Anne Pace, as well as male stars like Ron Acree, Nick & Patrick Newcomb, Chris Pigott and Jared Wolfe,. The history of each golf program is highlighted with lists of team and individual titles, as well as the All-Ohio Valley Conference and All-America selections. Linette Holmslykke’s achievements in 2019 are highlighted as she was the first woman to join an OVC school reach the final of the NCAA Championship on their way to winning the NCAA Elite 90 Award.

The addition of the Racer Golf Training Facility is just the beginning of the improvements envisaged in the MSU Athletics Facility Master Plan. Home of Racer Golf, the Frances E. Miller Memorial Golf Course has been a great place to play since 1983. Murray State Athletics plans to build a more functional 300 yard driving range and redesign the practice greens. Indoor bays in a building on the driving range allow the racers to get going in any weather. The racers are already enjoying a great locker room in the Miller Memorial Clubhouse.

“This facility will make a difference to both men’s and women’s golf. I appreciate everyone who was involved in this project. There are at least three ingredients to success in athletics. The first is the student athlete. Those who have a passion and the desire to learn. Second, there are places where you train and play, because that’s where championships begin. And third, coaches are probably the most important ingredient of all. We’ve all had coaches and teachers who changed our lives. The ones who made us higher than we ever thought we could make it. They are leaders, mentors, surrogates and dedicated professionals who are talented at their jobs. Coach John Wooden said well. A good coach can change a game. but a great coach can change a life. “

“We had 89 years of combined golf on this campus and only three coaches. That’s unheard of. It just shows the commitment these coaches have for their sport, their student athletes and this university. (Coach Buddy Hewitt, Coach Eddie Hunt, Coach Velvet Milkman) have built a top-class golf program for men and women that we can all be proud of. “

“These three people (Coach Hewitt, Coach Hunt, Coach Milkman) and their families have transformed literally thousands of people through their dedication to golf in Murray State to become highly competitive athletes. These three coaches have developed students, individuals, players, and professionals who equip young men and women to become outstanding citizens, spouses, and parents. This is Murray State Golf. “

“Everyone here today has played an integral role in developing our golf programs. Our golf teams have achieved success over the years, but there are several factors that contribute to that success. I find the support of our MSU administration and supporters so important . ” The Miller Golf Course construction and uses that we have enjoyed over the years are important. This facility will allow us to practice year round and will help us recruit high quality student athletes. “

“What an exciting day for Murray State, the athletics department and our golf programs. It’s exciting to honor those who paved the way for this moment. This new facility will be a hallmark of our university and program and I am happy that our players can begin to maximize their skills. “

“Buddy Hewitt did something that is very difficult. He came here and was a great athlete and then he stayed and became a great coach. The word that was used all the time to describe Coach Hewitt was that he was a gentleman I am very proud to be here with Buddy at the opening of the golf course today. “

“It’s rare for a coach to stay in a school for 41 years. This is testament to the quality programs at this university as well as the people they hire. Big Bud loved golf and he was good at it. He was a gentleman.” Gentleman. He was smart, funny, and loved the game of golf because it was a mental game. I know he would say this golf facility will help the program and he would be honored to have his golf history recognized. “

About the master plan of the MSU athletics facility

The master plan of the facility, which was passed on to Racer Nation in August 2021, creates clarity and prepares the racers for a great future. The 14 month evaluation process was meticulous and thorough, and provides a vision for a way to achieve the greatest advancement in athletics facilities in Murray State University’s history. In consultation with the university management, architects, engineers and construction specialists, an in-depth study of each sports facility was carried out in order to determine the current load-bearing capacity, create a needs analysis and outline the scope of work for each venue. The plan is part of the larger capital campaign for Murray State University. Sports venues touched include the CFSB Center, Roy Stewart Stadium, Bennie Purcell Courts, Pat Spurgin Range, Cutchin Field, Johnny Reagan Field, Marshall Gage Track, Miller Memorial Golf Course, the Racer Arena and the Racer Field. A new Athletics Performance Center is included in the plan.