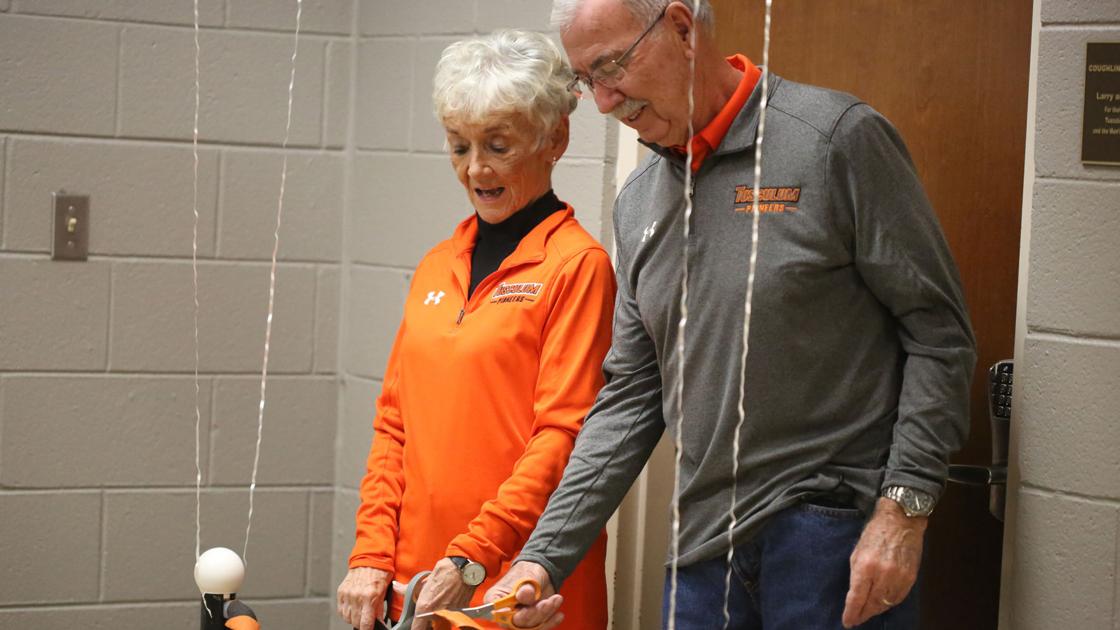 It may look like a life-size video game, but Tusculum University’s golf program has received a gift that will help Pioneers get into the “swing” of things for years to come.

Thanks to the generosity of two loyal fans of Tennessee’s most historic university, the Larry & Donna Coughlin Golf Training Room benefits TU golf students. The institution was inaugurated on Thursday afternoon in the presence of the institution’s founders as well as the university management and alumni.

Nicknamed “The Bunker”, the Coughlin Training Room is located in the University’s Indoor Practice Facility on the Greeneville campus. The training center includes a state-of-the-art golf simulator and a four-hole putting area.

The Coughlin training room features Foresight Sports’ GC2 simulator, which enables Tusculum golf teams to use the program not only indoors but also on the golf course. Foresight Sports’ GC2 is considered by many PGA Tour professionals to be the best on the market. Not only because of its functionality and data collection, but also because of its ease of use and portability. The system is a three-time winner of the Golf Digest Editors’ Choice Awards.

“In my short time at university, it’s wonderful to meet people like Larry and Donna who support and love Tusculum. Not only because of their love for sport, but also because of the solidarity and support they give our students back, ”said TU President Dr. Scott Hummel. “We are very grateful for your generosity, your support and your love for Tusculum.”

The Coughlin Training Room, which was previously used as an additional class and meeting area in the Indoor Practice Facility, was rebuilt this autumn by the talented and hardworking staff and the crew of the Facility Management Tusculum department and the staff from the university IT department. Artificial turf and turf were installed, ceiling and floor tiles removed and an accompanying wall installed to create a bay for the simulator and a separate area for putting. HD flat screen televisions were also installed, as well as improvements in lighting and power requirements.

“We’d like to thank Larry and Donna for their generosity in making this a reality,” said Doug Jones, vice president of athletics and university initiatives. “This will be a game changer for our golf programs. The Coughlins are wonderful supporters of Tusculum and this training facility will benefit our golf student athletes for years to come. “

The marketing graphics for the interior and exterior of the Coughlin training room were designed by Nick Forsberg, who earned his Bachelor’s and Master’s degrees in Tusculum in 2016 and 2018 and was a member of the TU men’s golf team from 2012 to 2016.

Forsberg was two-time selection of the All-South Atlantic Conference and was a member of the SAC championship team of the TU 2015, where he won medalists for the league championship this season. He was also a two-time SAC Scholar Athlete of the Year and a 2016 CoSIDA Academic All-American.

Larry Coughlin took the ceremonial first swing on the golf simulator and the Coughlins received a thank you card from current members of the Tusculum golf team.

“On behalf of our program, I would like to thank Larry and Donna for this generous gift,” said TU coach Ross Cash. “At a time when things are being shut down and canceled, it is refreshing to see how we are now moving forward, building and doing, even in the face of a pandemic.”

The Coughlins have been actively involved in Tusculum University and its student athletes over the years, and are respected in the Greeneville community as members of the Notre Dame Catholic Church and numerous other civic groups such as the Greeneville Exchange Club and the Ladies Classic Basketball Tournament Committee. You also serve on the board of directors of the Consumer Credit Union.

In 2010, Larry and Donna were presented with the Sports Benefactor Award, which honors individuals for their contribution to Tusculum’s sports programs.

For more information about joining the Pioneer Club or making the annual donation, contact Josh Ealy, Assistant Athletic Director for Operations & Development at 423-636-7331 or [email protected]