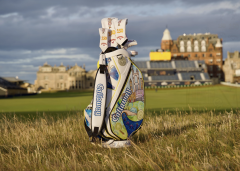 A total of £126,000 has been raised in a charity auction of The Big Bag Trail sculptures, a unique creative collaboration between partners, Callaway and St Andrews Links to commemorate the 150th Open.

The idea for The Big Bag Trail began when pupils from two St Andrews schools – Madras College and St Leonards – were commissioned to design a Tour Bag that Callaway staff players would use at the 150th Championship.

To showcase the excellence of those designs, the sculptures of the final 10 were positioned in various locations around St Andrews, as The Big Bag Trail became a route from which locals and visitors could explore throughout the town, and proved to be a popular attraction for the record-breaking crowd of fans who flocked to attend this year’s Championship.

The trail included the winning design by 17-year-old Iona Turner, whose creation titled ‘Nessie’s Round to Play’, was selected to be made into the official golf bag used by Callaway Staff Professionals competing at The 150th Open.

Following the conclusion of the event on July 17, which saw Cameron Smith become Champion Golfer of the Year, the sculptures were moved from their locations around the Home of Golf to the St Andrews Links Clubhouse where they were auctioned off by celebrity auctioneer Charlie Langhorn.

All proceeds from the auction will go to CHAS (Children’s Hospices Across Scotland) and Scottish Sports Futures (Changing Lives Through Sport).

Neil Howie, President and Managing Director, Callaway EMEA, said: “This has been a truly unique and wonderful project. Seeing the designs created by the young artists for the first time gave us a real sense that we were on the road to something special. But to see them come to life as these 10 beautiful sculptures, not forgetting Iona’s winning design that was made into the official bag used by our Staff Professionals during the 150th Open, has been an unforgettable experience. We’re delighted to have raised so much money for two such worthy causes, while also promoting the incredible community spirit that surrounds the Home of Golf.”