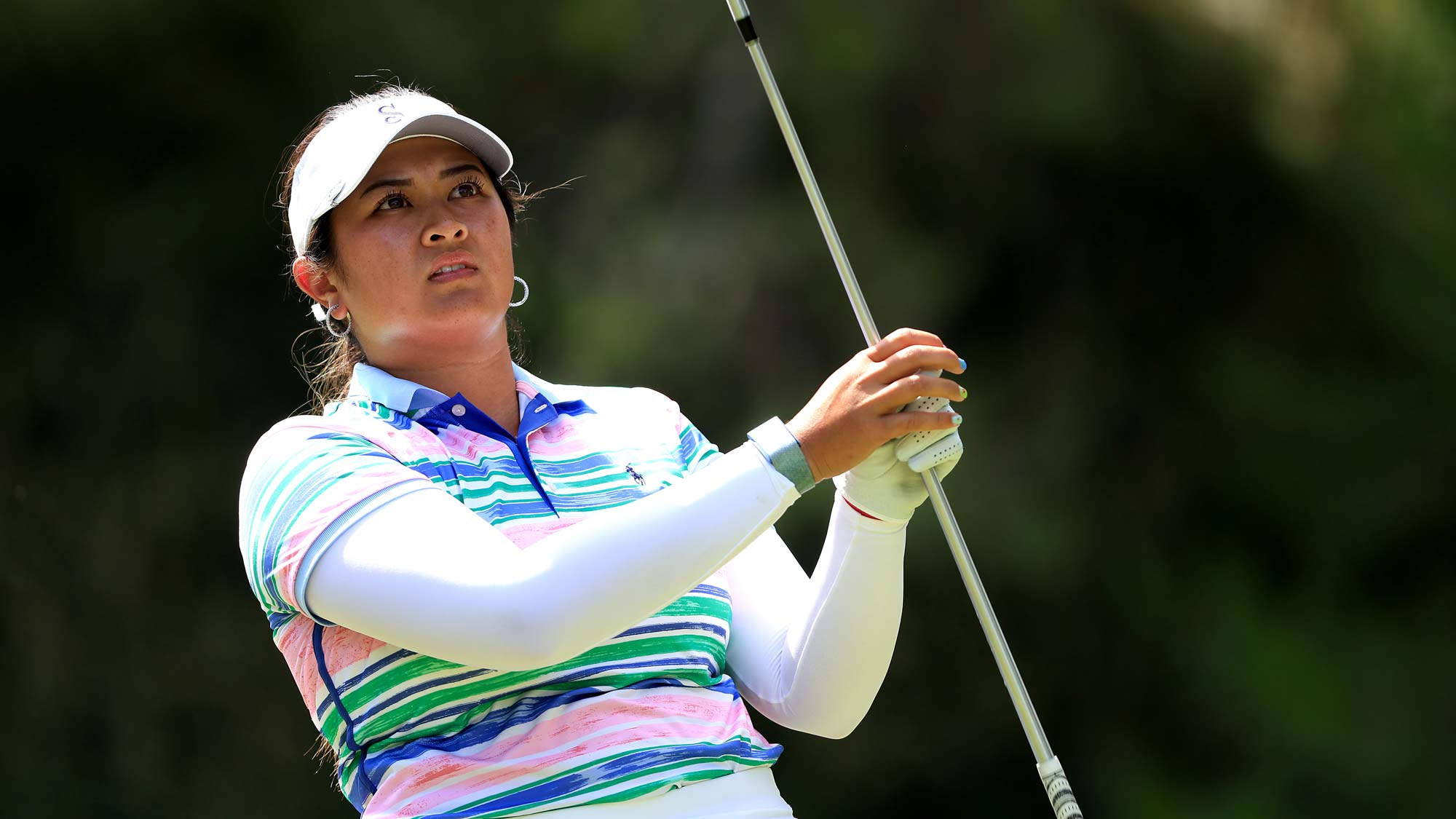 Eun-Hee Ji didn’t realize her match against Madelene Sagstrom was over when she sank her par putt on the 12th hole at Shadow Creek to win in the quarterfinals of the Bank of Hope LPGA Match-Play presented by MGM Rewards. No one, not even the Korean golfer herself, expected No. 36 Ji to take down the undefeated No. 12 Sagstrom in such a dominant fashion. Ji defeated Sagstrom, 7 and 6, and did so without losing a single hole.

“I didn’t know that was my last hole, so I was thinking like, ‘oh, I really tired,’ and then, ‘from now I need more focus,’” she laughed. “My caddie told me. She had a birdie putt, I was a little bit closer, and after her putt I’m like, ‘Okay, two-putt. Yeah? Okay, let’s go in.”

Ji may not have realized the round was over because of her extreme focus on the course, which she said was the key to her impressive performance. She birdied five of 12 holes and made par on all the rest. But perhaps her focus never waned after Saturday’s early Round of 16, where she earned a 2-and-1 victory over No. 20 Hye-Jin Choi. Most players moving onto the quarterfinals took the time in between rounds to rest and recover. But not Ji.

“In the morning I didn’t putt well, I didn’t make a lot of putts, so after the round, a little bit of rest, I had putting practice,” she said. “I feel a little bit better than this morning, so that just worked out.”

Ji, the 2009 U.S. Women’s Open champion, lost in 19 holes to Shanshan Feng during last year’s quarterfinals at Shadow Creek. That defeat was on her mind this year, and she was happy to finally make it into the Semifinal round. But she also has one more milestone in mind. Ji is not in the field for next week’s U.S. Women’s Open, which is holding one final spot in for this week’s winner. After this match, Ji has the confidence to be that winner.

“After this round I feel like, yeah, I can make it,” said Ji, who has competed in every U.S. Women’s Open since 2008. “But golf is different every day, so I try my best every day.”

With a fierce comeback from an early deficit, Andrea Lee brought Gemma Dryburgh’s Cinderella run to an end in Saturday afternoon’s quarterfinals match. Dryburgh, who got into the Bank of Hope LPGA Match-Play presented by MGM Rewards field late Tuesday evening, captured three of the first five holes for a quick 3-up lead and sat 2 up at the turn. But Lee knew she was not out of contention.

“You can’t really expect your opponent make mistakes. You’ve got to tell yourself that you need to be the one to make the birdies and the putts,” said Lee, who reached the quarterfinals with a 2-and-1 win over Caroline Masson in the round of 16. “That’s what we both did coming down the stretch.”

Lee tied the match with pars at 10 and 11 and even took a 1-up lead with a birdie at the par-4 12th. Dryburgh brought the match back to even with a birdie of her own on No. 13 and the duo swapped pars the rest of the back nine. Dryburgh had an opportunity to end the match on 18, hitting a phenomenal shot out of the fairway bunker to land within five feet of the hole, but she couldn’t sink the winning stroke. The pair advanced to No. 10 for a sudden-death playoff, where Dryburgh again trickled her birdie putt right to the hole but came up just one heartbreaking roll short of falling in for the win. Lee knocked in her own 7-foot par putt, one she called “the best par save that I’ve ever made,” after finding the greenside rough on her approach.

“It was exactly how I envisioned it,” said Lee of her third shot on the first playoff hole. “I knew I wasn’t going to fly it to the green. It’s way too firm. I had to bump something into the rough and kind of die it, let it roll towards the hole, which is exactly what I did.”

At No. 11, Dryburgh made her first unfixable mistake of the tournament, sending her second shot into the rough short of the green. With Lee safely on the green in regulation, Dryburgh could not get up and down for par, giving Lee two putts to take the victory.

Two years ago, Lilia Vu was on the verge of stepping away from the game of golf. Today, she two matches away from capturing her first LPGA Tour title. The 24-year-old from Southern California needed 20 quarterfinal holes to beat Jenny Shin in a back-and-forth affair that saw the duo tie just six holes over the afternoon.

“I felt like she was playing well, I was playing well, so I would win a hole and then she would win the hole after and it would go back and forth like that,” said Vu, who is 5-0-0 this week, the only player with a perfect record. “Felt like I was fighting tooth and nail all day.”

Vu carried the lead for much of the second nine and held a 2-up advantage going to the 17th hole. With her back to the wall, Shin won No. 17 with a par to take the match to the 18th, where she nailed a 15-footer for birdie to force extra holes.

After swapping pars on the first playoff hole, both players found the greenside rough on No. 11. Playing first, Shin stubbed her chip and didn’t make it out of the rough. She sent her second shot well past the hole, leaving the door wide open to Vu, who nestled her own chip within inches of the cup for a conceded par and a berth in the semifinals.

Reaching Sunday’s final day of action is a mark of improvement for Vu, an eight-time winner at UCLA who was expected to make an immediate splash as a professional. Instead, she made just one of nine cuts in her 2019 rookie season and lost her LPGA Tour status. She turned to the Epson Tour to rediscover her stroke and her love for the game, taking three titles in 2021 en route to winning the Ascensus Race for the Card and graduating back to the LPGA Tour.

The biggest comeback of the Bank of Hope LPGA Match-Play presented by MGM Rewards goes to Ayaka Furue, who recovered from a four-hole deficit through 11 to force a playoff with Jodi Ewart Shadoff and win in 22 holes. Though Furue’s bogey-free quarterfinal round was full of excitement, it all came to a head on the final hole of the day, No. 13 at Shadow Creek.

The 22-year was very unhappy with her shot off the tee, which came up short of the green, on the edge of the penalty area and behind a tower of rocks which completely obscured her view of the flagstick. Then, she breathed a sigh of relief after seeing her opponent’s ensuing tee shot.

“When I first hit my shot, I thought I was kind of putting myself into some trouble,” she said. “Then I saw Jodi hit her shot and felt kind of lucky that she had flown the green and had to take that drop.”

Ewart Shadoff hit her tee shot well left and behind the grandstand, receiving relief from the temporary obstruction since her ball remained playable. She pitched onto the green, but the ball rolled well past the hole into the rear rough. Furue found the green despite not being able to see it, but faced a 35-foot putt to win the match after Ewart Shadoff’s par attempt went long. It was ultimately no problem for the 22-year-old, who was the best putter on the JLPGA Tour last year before she made her way to the LPGA Tour.

“We had shot the distance for it for the roll out and it was about 20 yards carry and letting the rest, 15 feet roll out,” she said of the winning par putt. “So, it was just up to me to hit it 20 yards and then let the ball roll to the hole from there.”

Throughout the match, and especially on the back nine, Furue’s putting and consistency of play were her saving graces. The Japanese golfer went bogey-free in the match’s 22 holes, despite the physical and mental exhaustion that comes with the test that is Shadow Creek. Furue had played 17 holes earlier in the day, making her Saturday total a whopping 39. Nothing was more draining than the final back nine, which was a bane for many golfers that day.

“Coming into the back nine I was 4-down, and it was pretty mentally draining having to rely on trying to get some birdies and giving myself enough opportunities get those birdies,” she said. “It’s been a really long day.”