Captain Catriona is ready to taxi in Toledo | LPGA 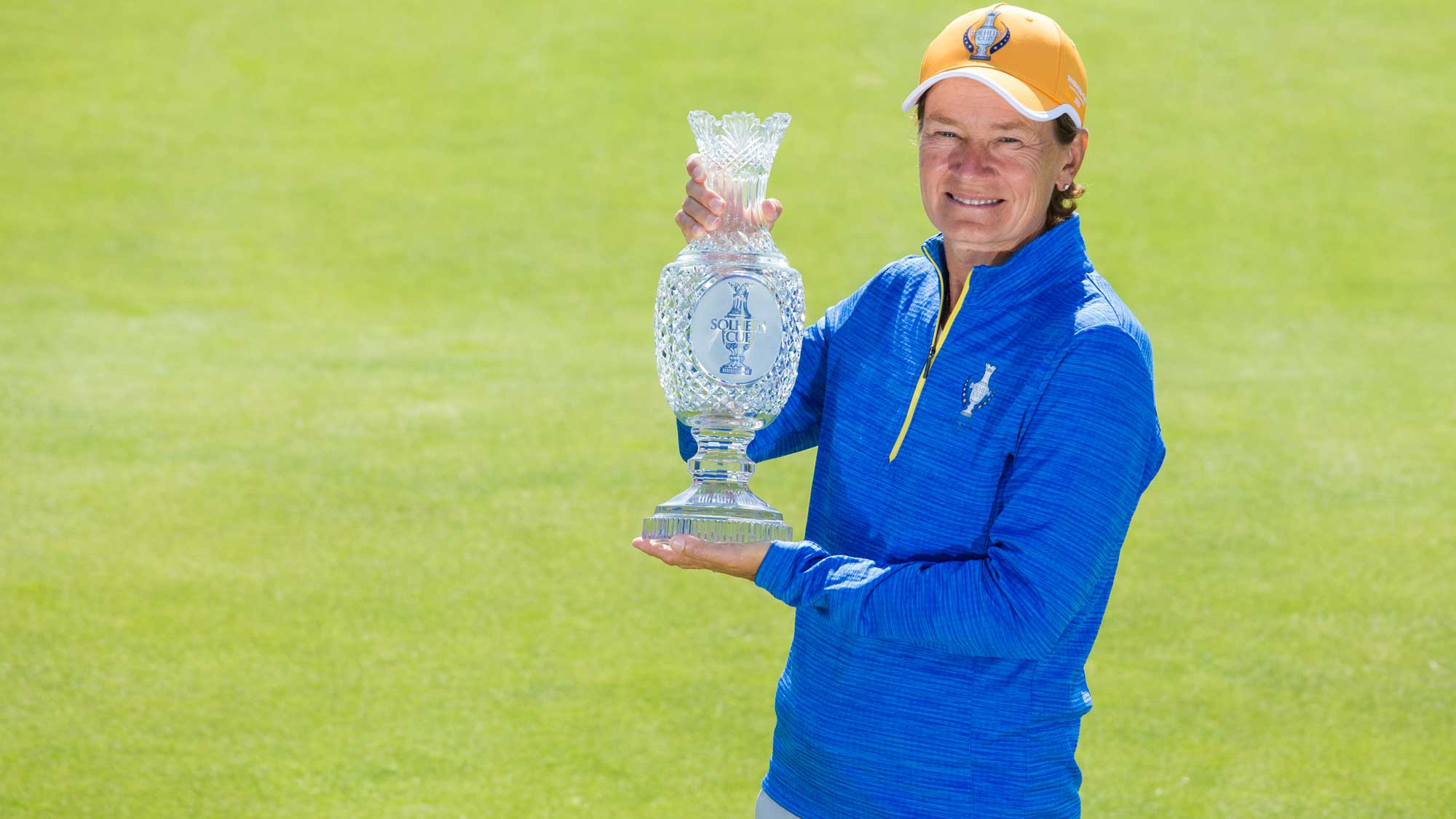 In the days between the AIG Women’s Open and the Solheim Cup, LPGA.com met with the captains for one final Q&A before the games begin. First: two-time European champion Catriona Matthew:

Q: What a great week with a big championship in Carnoustie, very close to your home (in North Berwick). It looked like most of your players took an early flight to London after the AIG Women’s Open. Are you all traveling to Toledo together or have you all gone home and will travel separately?

Captain Catriona: No, everyone has gone home and will travel separately. They are distributed everywhere.

Q: When will you meet again?

Captain Catriona: I think everyone travels either Monday or Tuesday, so depending on flight times we should all be together no later than Tuesday evening.

Q: How was the last three weeks when you completed the team and put the finishing touches on everything?

Captain Catriona: In the last few weeks we have seen a lot of changes in our team with shifts in the points and the world rankings. We had a lot of players who played really well. So it was stressful, especially after looking at the picks. But it’s nice to have everything ready and done.

Q: Often times, you don’t realize how stressed you are until the cause of the stress disappears and you can finally breathe again. Has that been the case with you in the past few weeks?

Captain Catriona: Yeah, I think last week, with so many different scenarios in the air and all through Sunday and what happened in the finals (the AIG Women’s Open) it was certainly more stressful than it was last time (I was Captain in 2019). And it’s never easy to tell people that they’re not on the team. It’s never nice. But now it’s nice that we have the team ready and can concentrate on the Solheim Cup, the pairings and all that, the exciting things.

Q: Are you leaving on Sunday (from Edinburgh)?

Q: What are you going to do until then?

Captain Catriona: The kids are going back to school. My youngest started the first day of school today. I recorded it for the first time. So there was a different kind of excitement here. She was nervous, a bit like on the first tee at the Solheim Cup.

Q: Pat (Hurst) used the pod system that Paul Azinger developed for the 2008 Ryder Cup and split the 12-player team into three pods out of four based on their personality. When you make the pairings, are they personalities or golf based?

Then you take into account that you are exposing four players per session for the first two days and trying to give everyone enough rest. You’ve seen it over the years, it all comes down to singles.

I think it’s a combination of everything when it comes to the pairings.

Q: What do you think of the extraordinary rise of Matilda Castren and what she had to achieve to qualify for the team?

Captain Catriona: To be honest, I had never heard of her last year. I saw her at the US Women’s Open and then she won the Mediheal next week. I felt bad when I had to tell her that she had to be a member of the LET to be eligible. Then she decided to go to Finland and play.

Winning in your home country is difficult enough. But to win in his home country, knowing that she had to win to qualify for the Solheim Cup, is extraordinary. It just shows how strong she is mentally.

Q: Much is said about how Europeans, as juniors and amateurs, grow up with match play. Do you look at that considering how long it could have been for some of these players?

Captain Catriona: Oh yes, of course you look at a player like Leona Maguire who had such an outstanding Curtis Cup record. The Curtis Cup would be the biggest event you could play at this point and you have the same pressures at this point in your career as you do now in the Solheim Cup.

Q: Celine Boutier’s breakout performance at Solheim Cup 2019 surprised a lot of people. Did that achievement play a role in her being on that team?

Captain Catriona: Absolutely. And she had a very good year. She’s not the most noticeable player, but you see her week after week and she’s right at the top. It’s not long, but every facet of the game is really good. And she’s a great putter, which is always good in match play.

Q: You made a controversial choice the last time you added Suzann Pettersen to the list. It turned out that Suzann pocketed the winning putt for Europe. You didn’t do that this time, even though Mel Reid wasn’t at his best. Do you think Mel could be the key?

Captain Catriona: Could be good. She has a real passion for the Solheim Cup. Really love it. I think when I told her (in 2019) that she wasn’t there, the next words came out of her mouth that she wanted to be vice captain. There was no hesitation in what shows her character. She is also a great entertainer and motivator. It will be good to have them in the team room and I think the younger players will look after them.

Q: Emily Pederson has proven to be an amazing player. But it can also be emotional. How do you use this skill and those emotions in what is probably the most stressful environment she has ever played in?

Q: What else is on your agenda?

Captain Catriona: Just get in before the players arrive, make sure everything is ok and then work on the pairings. It’s going to be a great week.