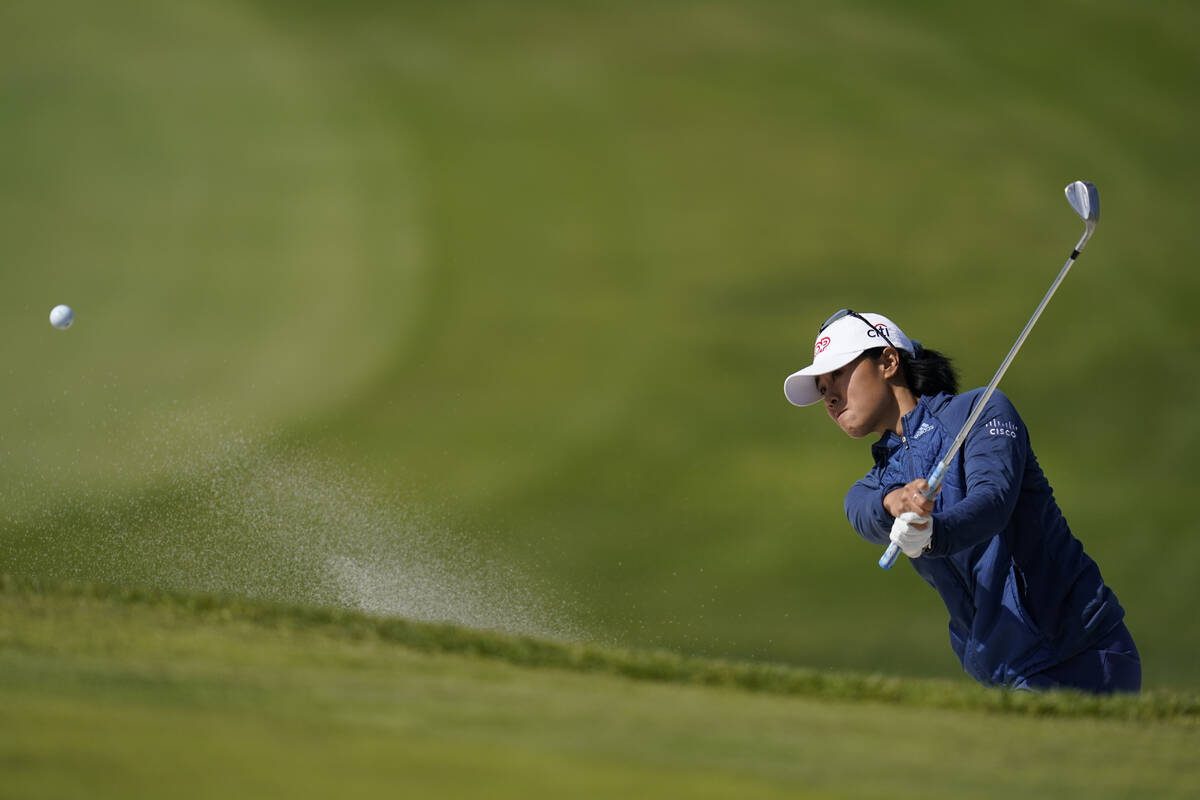 Danielle Kang is the unofficial host of this week’s Bank of Hope LPGA Match Play with her many years of experience on a golf course that requires a large dose of local knowledge to play successfully.

But whether Kang will be able to tee it up when the tournament begins Wednesday morning at Shadow Creek is a big question mark. The six-time LPGA Tour winner is dealing with a bad back, an issue so severe she has taken the past four weeks off from competition after withdrawing in the middle of her previous two starts.

“I’ve been home for quite some time now, and it’s been really tough,” Kang said Tuesday after playing nine holes in the pro-am. “It’s been a tough road. I have a tough road ahead of me.”

The extent of her back issues remain a mystery to everyone except Kang and her team of doctors, specialists and others close to her. But they are severe enough that Kang said she wouldn’t even attempt to play this week if the tournament wasn’t on her home course in her home town.

“Probably not, no, if I’m being honest about that,” she said. “I’m a really proud ambassador of MGM. I love MGM, and I love Las Vegas. Shadow Creek is my home. Everybody here, I know how many people are rooting for me.”

On Monday, Kang was in no condition to play and spent the day seeing specialists. On Tuesday, she felt better. What happens the rest of the week remains to be seen in a tournament as physically demanding as any on the calendar. It’s a long walk and an event that includes seven rounds in five days for the top four finishers.

“At the end of the day, I’m an athlete and I still want to portray the fact that I’m here and ready to go,” she said. “I always want people to know I’m trying the best I can, and I’m a competitor.”

Kang is one of 64 players at Shadow Creek looking to survive the gauntlet of match play. Players have been divided into 16 four-person pods and will play a round robin within their group over the first three days. The winner from each pod will advance to the weekend, where knockout rounds take place — round of 16 and quarterfinals Saturday, semifinals and finals Sunday.

That means a lot of holes and a lot of walking, something winner Ally Ewing and finalist Sophia Popov experienced in last year’s inaugural event. Both played about 120 holes over five days in 100-degree heat, and their bodies felt it.

“I just remember having a lot of blisters on my feet, really struggling come finals against Ally,” Popov recalled. “I think both of us were in the locker room, and I looked at her and said, ‘Man, this is an exhausting week,’ and she said, ‘It is. I’m just trying to make it through the finals right now.’”

Both said they hope to have those same feelings this week.

“I told myself beginning of the week that if I was exhausted it was because I kept winning, which is a good thing,” Ewing said. “That means you’re advancing.”

Minjee Lee, who won two weeks ago and comes into this week as the No. 1 overall seed, said staying hydrated, patient and not wasting energy away from the course will be key to surviving.

“It’s an endurance race, this match play tournament, so hopefully, yeah, just hydration will be a big key,” Lee said.

Players will get a break Wednesday with early tee times starting at 8 a.m. before the day’s heat gets too strong. That changes Thursday and Friday, when tee times are pushed back to better accommodate TV windows.

Unlike last year when most of the field had never seen Shadow Creek, a good number of them this year will rely on lessons learned in 2021. No one has played it more than Kang.

“I’ve played here so many times … it might give me 2 percent advantage, but that’s advantage that I need,” she said.

Greg Robertson covers golf for the Review-Journal. He can be reached at [email protected]