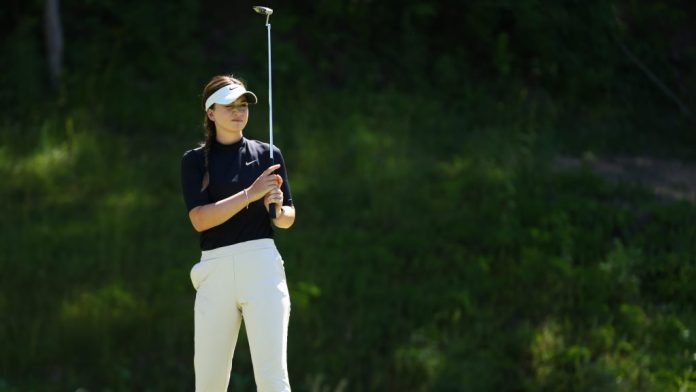 Gabi Ruffels made her professional debut at Gainbridge LPGA in February with the exception of sponsors. The radiant Australian star left USC early to pursue a professional career with no status on a tour. She would have to rely on sponsor waivers and Monday qualifications to find her way.

This week’s Meijer LPGA Classic is the fifth exception to Ruffels’ season. Their final exception – the LPGA allows up to six for non-members – comes next week at the KPMG Women’s PGA.

It has not escaped the notice of Ruffels that a non-member, Yuka Saso, won the last major of the tour.

“If I could,” said Ruffels, “that would be pretty great.”

Ruffels opened with a 5-under 67 in the Meijer with her trainer Grant Waite on the bag. Waite, a New Zealand PGA Tour winner, has Patty Tavatanakit on the loop for her first two events of the season. She shared fifth place at Gainbridge and finished T-14 at Drive On in Ocala with Waite on the ropes. In April, the LPGA rookie won the ANA Inspiration.

Patty Tavatanakit speaks to her caddy on the ninth tee during the first round of the Gainnbridge LPGA at Lake Nona Golf and Country Club on February 25, 2021 in Orlando, Florida. (Photo by Cliff Hawkins / Getty Images)

Tavatanakit, Ruffels and Waite are all members of Isleworth in Windermere, Florida. Waite also works with Jennifer Song, who, like Ruffels, is a former U.S. women’s amateur champion. Ruffels started working with Waite earlier this year.

“I think he’s been on the PGA Tour for 10 years,” said Ruffels, “so it’s really cool to get some of his knowledge and insights and have it in my pocket. It was great.”

Gabriela Ruffels reads a putt on the 15th green during the first round of the Meijer LPGA Classic for Simply Give at Blythefield Country Club on June 17, 2021 in Grand Rapids, Michigan. (Photo: Gregory Shamus / Getty Images)

In her five starts at LPGA, Ruffels has made three cuts and made $ 63,176. She would be exempt from the second level of Q-School based on her Rolex ranking of 136. Players within the top 400 are exempt from Phase II. Players in the top 75 (as of August 9th) are exempted for the final phase now known as the Q-Series.