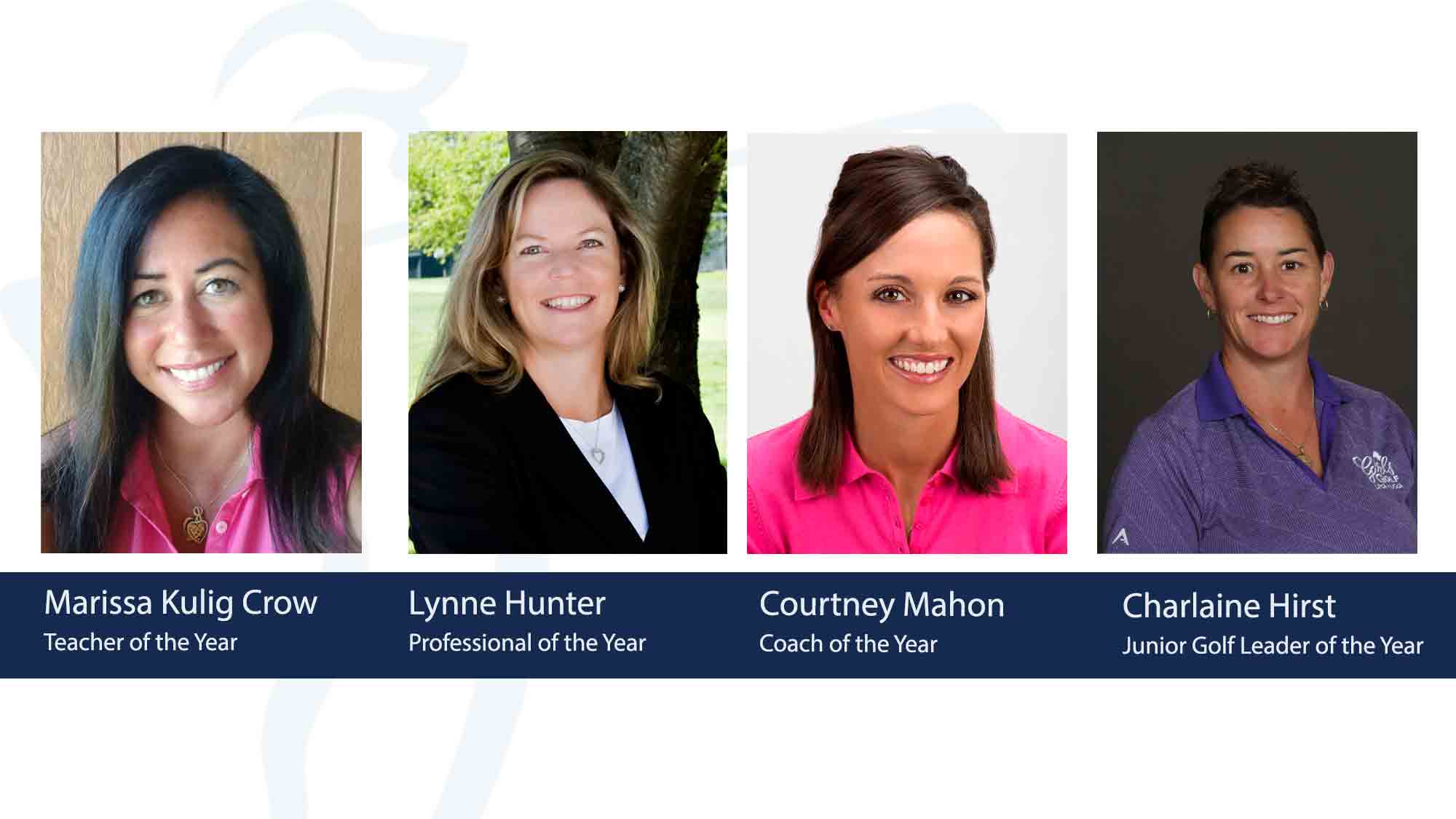 National Award Winners were selected by the LPGA Professionals Membership Executive Committee from the pool of Section Awardees elected by officers from the six regional Sections: Central, International, Midwest, Northeast, Southeast, and West.

The LPGA established the National Teacher of the Year Award in 1958. The award is given annually to the female golf professional who has demonstrated excellence in terms of golf instruction over the course of the year.

Kulig Crow has been a member of LPGA Professionals Class A since 2017 and currently works as a teacher at Lyman Orchards Golf Club in Middlefield, Connecticut. She is the LPGA * USGA Girls Golf Site Director and donates her time to serve as a volunteer golf instructor for local junior after-school programs. As the creator of the Golf Fore Women Clinic series, which has helped over 5,000 women improve their golf game since 2013, she has established a student-centered methodology with her teaching approach that makes her students feel welcome and comfortable from day one .

She is also a certified Callaway Club Fitter, Frankly Golf Putting Instructor, CardioGolf Trainer, and Level II Yoga for Golfers Instructor. For over 20 years as a teacher, she was a golf instructor for Jane Blalocks Golf for Women Clinics from 2003 to 2012 and taught clinics for the Executive Women’s Golf Association (now LPGA Amateur Golf Association).

In response to a brief season in 2020, Kulig Crow took her classes online and used a variety of methods to stay connected with her students by reviewing swing videos, using simulators, and through social media. She continues to incorporate both practical and technical methods into her approach today.

“Teaching and developing the game of golf, especially with women, has been my passion and calling for many years,” said Kulig Crow. “I am blessed to work with thousands of students each year as it is they who drive me every day. A student once told me that teaching new skills and trusting others are among the noblest ways in life. Receiving this award among such talented and dedicated LPGA professionals humbles and honors me. “

Professional of the year, Lynne Hunter

Established in 1980, the LPGA Professional of the Year is awarded annually to an LPGA Professionals member who primarily works in a golf operation, golf association, or industry position promoting the game through player development, growth of game initiatives, and other golf activities.

Hunter has been a member of LPGA Professionals Class A since 2007 and currently serves as the LPGA / PGA Head Professional for Kenwood Golf and Country Club in Bethesda, Maryland. With an impressive background as a golf instructor, Hunter is part of the Northeast Section Professional of the Year and her first national honor for the third time. Throughout her career, she also received the LPGA Northeast Section’s Junior Golf Leadership Award (2012), was named a US Kids Golf Top 50 Kids Teacher (2008, 2009, 2011), received the Middle Atlantic PGA Bill Strausbaugh Award (2019) and received the Kenwood Golf and Country Club Jack Weber Award for long-term commitment to improving golf programs (2006).

Her career began in 1987 as a summer intern at TPC Potomac on Avenel Farm before becoming a golf shop assistant at Hobbit’s Glen Golf Course in Columbia, Maryland in 1990. From there she worked her way up to Assistant Manager at Jay Perkins High Golfshop (1993-1996) and Merchandise Manager at Westwinds Country Club (1996-1997). Her next career move was Kenwood Golf and Country Club, where she started as an Assistant Golf Professional (1997-2011) before moving to Head Golf Professional in 2012.

Although the past year has been challenging for her and her club, Hunter has been able to successfully lead her team through an increase in membership growth and an increase in the total number of rounds played. She created safety guidelines for her course to ensure staff and members stay healthy, and trained staff on new protocols and procedures. She did all of this while running a membership program and mentoring a female Professional Golf Management intern to help her learn the basics for her future career.

“I am really honored to receive this prestigious award and to represent this outstanding organization,” said Hunter. “I couldn’t have had this success without the support of a strong team, so this award is also a thank you to my family, friends, co-workers and Kenwood ‘family’ who have supported me as I pursue my passion for helping others to enjoy the game of golf. “

In addition to serving as Kenwood’s Head Professional, Hunter is also the Middle Atlantic PGA Secretary, Middle Atlantic Representative for the PGA Magazine Women Leaders platform, and has served as rules official and hosted a US Women’s Amateur Qualifier in 2021.

Coach of the Year, Courtney Mahon

Courtney Mahon, a member of LPGA Professionals Class A, began her coaching career in 2008 when she was named Head Women’s Golf Coach at the University of Missouri – Kansas City. During her time at UMKC, she signed one of the top players in the state of Texas and Arkansas. Through structured practice, positive reinforcement, and hard work, each player improved their point average by at least five shots. In addition to making improvements on the course, it also changed the culture and reputation of the school’s women’s golf program.

Mahon returned to the coaching arena in 2017 as Head Girls Golf Coach at Olathe Northwest High School. She spent three seasons teaching her players discipline, organization, and hard work to achieve her goals. Her team qualified for the Kansas State High School Championship every three years and won several tournaments individually and as a team. Five of their players received All-State Honors.

In 2020 Mahon was offered the position of Head Girls Golf Coach at Notre Dame de Sion High School. She worked with longtime trainer Dana Hoeper. In Mahon’s first season in Sion, the team won several tournaments individually and as a team. Coach Hoeper and Mahon have led their team to many successes on the course, but they also focus on developing people for life after golf.

“It is an absolute honor to be LPGA National Coach of the Year! I am grateful for the opportunity to practice high school girls golf in Kansas at Olathe Northwest High School and in Missouri at Notre Dame de Sion High School, ”said Mahon. “Both programs have made enormous strides towards excellence and both are very special to me. I am so grateful to receive this incredible award. “

Hirst is the sole owner of Charlaine Hirst Golf LLC, which has been based in the Country Club of Whispering Pines since 2009. The development of their teaching business has resulted from pilot programs and group meetings and is constantly being optimized. A key niche she has occupied at CCWP and Moore County has been a leadership role in youth golf, especially in increasing the number of girls playing the game. Many of their programs, especially their junior tuition, are targeted at golfers who are learning to play golf or who just want to play with friends, family, or entry-level tournaments. She enjoys making the players enjoy playing on the court, even if her skills, approach or goals do not involve playing at a higher level.

Since 2009 Hirst has organized “Chipper’s Camps”, one-week junior summer camps that take place over eight weeks. The camps are limited to eight students per week and introduce them to the basics of the game and etiquette. Hirst hires junior assistants for each camp, many of whom are employed in their first jobs. Her current assistants are all young adults who attended their very first Chipper’s Camp 13 years ago. Over the history of the program, 900 juniors have been affected and will now enjoy the game for a lifetime.

Hirst is also Site Director for LPGA * USGA Girls Golf – Whispering Pines. She was a volunteer trainer at the local First Tea Chapter for eight years and saw a desire for girls to be nurtured in their own community. Girls Golf has been a fantastic way for her to empower girls, help them learn the basics of the game, and have lots of fun in the process. Hirst’s website has an all-female group of 24 dedicated, volunteer trainers who have enriched the experience for the program. She also encourages her participants to give back to the community by running campaigns like “Howl-O-Ween” for the collection of pet food for their local animal rescue and Operation Christmas Child’s shoeboxes.

“I love what I do. I love to share my passion for the game with the next generation of golfers and to be recognized alongside so many other LPGA professionals doing their part in growing the game is very special “Said Hirst.

Hirst received the Sandy LaBauve Spirit Award 2020, the most coveted award from LPGA * USGA Girls Golf, for their continued commitment and passion to empower girls through golf. She was also inducted into the Longwood Athletics Hall of Fame in 2007 and the Player Hall of Fame of the Women’s Golf Coaches Association in 2014.