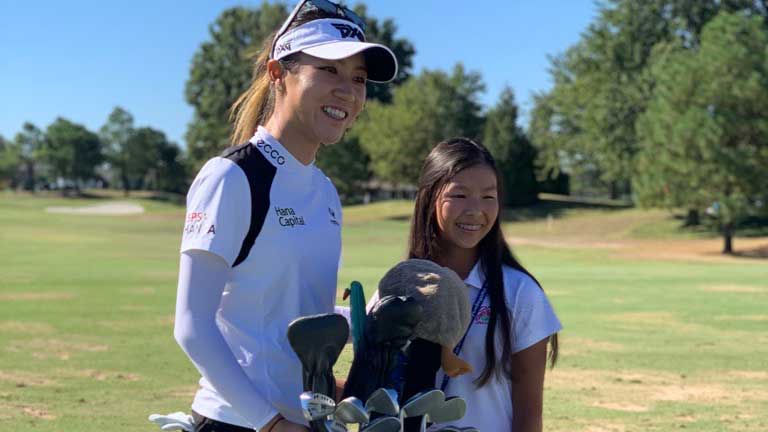 Fifteen-year-old Claire Hollingsworth was waiting on the Pinnacle Country Club’s driving range to finally meet her idol Lydia Ko at P & G’s Walmart NW Arkansas Championship. Hollingsworth was the subject of the first #DriveOn commercial outside the LPGA Tour player, launched at the 2020 LPGA Drive On Championship in Reynolds Lake Oconee. The story is about her journey since she was left in a small wooden box near an orphanage in China two days after giving birth. Hollingsworth was later adopted by a golf-loving family half a world away where they learned that while small, she is powerful and can accomplish anything she imagines.

Ko and Hollingsworth have developed a special bond over the past few years, exchanging Zoom calls, messages and hand-signed shoes, but never meeting in person. That changed on Thursday when an excited Hollingsworth soaked up every moment of the experience, as did Ko.

“When I heard from Claire, the #DriveOn story was quite inspiring. I think there were a lot of connections like between Claire and me, it’s really cool to be able to meet, ”said Ko, who will have Hollingsworth on the ropes as an observer during the first round on Friday. “I know it was tough without fans and everything else and everything was pushed back, this was a great place. It’s such a beautiful golf course and I think we should have really good weather for the next few days. I hope Claire is enjoying it.

“From my point of view, it’s really nice to meet and see Claire after feeling like we’ve been pen pals for a while.”