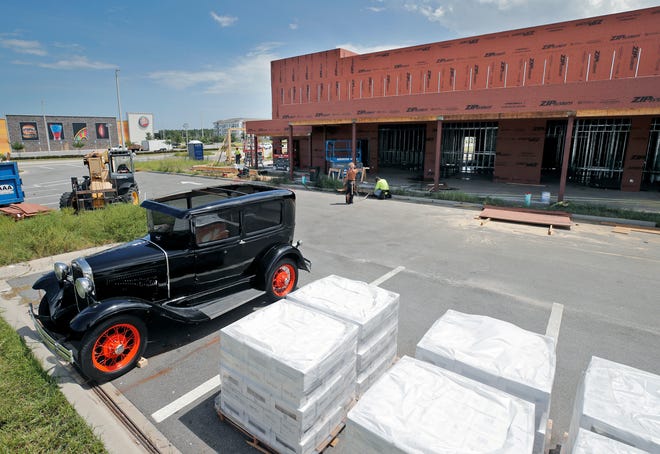 DAYTONA BEACH — An antique car-themed restaurant, a three-in-one Rooms To Go home furnishings store, and a new shopping center taking shape across the street are among the developments coming to Daytona Beach’s LPGA area.

Construction projects are underway along LPGA Boulevard on both sides of Interstate 95. A glance at the Daytona Beach City Commission’s agenda in recent months as well as its meeting this week shows even more commercial development, new homes and apartments in the works for the area’s fast-growing east-west corridor.

The West Palm Beach-based company is the developer of the Tomoka Town Center on the southeast side of the I-95/LPGA Boulevard interchange where Rooms To Go and the Ford’s Garage restaurant are under construction.

Tomoka Town Center offers more than a half-million square feet of retail shops and restaurants including anchors Hobby Lobby, Academy Sports and Dave & Buster’s. The center, which is adjacent to Sam’s Club and Tanger Outlets mall, has welcomed the opening of several new tenants this year. They include Salsa’s Mexican Restaurant, a shoe store called Good Feet, and another store called Buff City Soaps.

“There’s a few deals in the works, but we’re not prepared to announce them yet,” said Goldsmith.

A Ford Model T can be seen parked in front of the future Ford’s Garage restaurant on the corner of Cornerstone and Outlet boulevards. It will be the chain’s first location in the Volusia-Flagler area.

“We’ve been told they expect to open by either the end of this year or in the first month or two of 2022,” said Goldsmith.

Spokepersons for both the Ford’s Garage chain as well as Rooms To Go did not respond to requests for comment.

The Ford’s Garage restaurant at 1115 Cornerstone Blvd. is across from Dave & Buster’s, Culver’s and Chipotle. It will be the Tampa-based chain’s first eatery along Florida’s east coast.

“We’re very excited to come to the Daytona community,” said Marc Brown, president of both the Ford’s Garage chain as well as its parent company 23 Restaurant Services, in a 2019 phone interview.

The chain describes its restaurants as “neighborhood burger and beer joints” specializing in gourmet burgers and craft beers. “Ford’s Garage will give you the vibe of being in a 1920s service station (including) vintage Ford vehicles, gas pumps and fixtures,” according to the chain’s website. “Our bars feature prohibition-style elements of old brick, rich wood and a hand-hammered copper bar top.”

Brown said prices for entrees at Ford’s Garage range from $9.95 to $17.95. The menu for each of the chain’s restaurants includes 12 “Hall of Fame” burgers named after prominent people in the communities they serve.

The Daytona Beach location will also offer 150 different varieties of beer, including some from area craft brewers, as well as wine and a full liquor bar. The standalone restaurant will be just under 10,000 square feet in size and offer seating for up to 280 people at a time. It will include an outdoor patio. Brown in 2019 said he expected the restaurant to employ 150 workers, 70% of whom would be full-time.

The chain opened its first location in 2012 in Fort Myers, less than a mile from where Ford Motor Co. founder Henry Ford had his winter home. The chain is licensed by the automaker to use its logo and imagery.

Most of the walls are now up for the future Rooms To Go store, directly north of Tanger Outets. The 55,400-square-foot “prototype” store will be nearly three times the size of its old 16,880-square-foot store roughly three miles to the south on the corner of Williamson and West International Speedway boulevards.

“It’s going to be the largest we’ve ever built,” said Peter Weitzman, a vice president for the Hillsborough County-based Rooms To Go chain in a 2019 phone interview. “We’re thrilled. We love Daytona. It’s been a good market for us.”

The new Rooms To Go will be a three-in-one concept with separate storefronts for its Rooms To Go, Rooms For Kids and Rooms To Go Patio stores. The latter will specialize in outdoor furniture.

Most Rooms To Go stores are around 40,000 square feet in size. The existing standalone Daytona Beach store opened in the early 1990s and was one of the chain’s first locations. Weitzman in 2019 said when the new store opens at Tomoka Town Center, the chain will close its old ISB location and will either sell the building or lease it to another tenant.

The new Rooms To Go is expected to employ approximately 50 workers, roughly twice the number employed at its store on ISB.

Rooms To Go describes itself on its website as a retailer that offers hundreds of affordably priced home furniture options, including furniture lines endorsed by celebrities such as the Cindy Crawford Home Collection, Sofia Vergara Collection and Eric Church Highway to Home Collection.

Construction is also expected to begin soon on the future home of Miller’s Ale House on the southwest corner of LPGA and Outlet boulevards, confirmed Goldsmith. The restaurant/pub’s future location will be directly east of Sam’s Club, and will be part of an emerging restaurant row that includes Dave & Buster’s, the future Ford’s Garage, Culver’s, Arby’s and Stonewood Grill, across the street on the northeast corner of that intersection.

“It will be a standalone restaurant that I believe will be about 7,200 square feet,” said Goldsmith, who added, “they (Miller’s Ale House) are doing their own construction.”

Miller’s Ale House currently operates a location roughly three miles to the south, on the northeast side of the I-95/West International Speedway Boulevard interchange. The chain has not said whether it will close that location when the new one opens.

AVALON PARK IS COMING:Developer on track to break ground on first phase of massive project

TOO MUCH OF A GOOD THING?Fast growth raises concerns that Volusia County is becoming over-developed

Meanwhile, across the street on the east side of Tomoka Town Center, construction continues on a new retail complex called Shoppes at Williamson Crossing. The 21-acre center is directly behind the separately owned RaceTrac gas station/convenience store on the southeast corner of LPGA and Williamson boulevards.

The Shoppes at Williamson Crossing recently welcomed the opening of a standalone Taco Bell, which includes a drive-through window. A multi-tenant retail building has also been completed directly east of Taco Bell, where a Great Clips hair salon and an AT&T store have already opened.

The two remaining storefront spaces in the building will become home to a pair of restaurants set to open this fall: Oliv Epicurean Grill, which will be the fledgling chain’s second in the area, and a new concept eatery called Brunch. Both are owned by Chicago area entrepreneur Daniel Moon, who has a second home in Flagler Beach. Moon opened his first Oliv Epicurean Grill on Ridgewood Avenue in Holly Hill a few years ago. He also owns an Oliv Epicurean food truck locally.

Moon originally planned to open a second location here of a diner he owns in the Chicago area, but decided to instead open his new concept eatery Brunch, which will offer the same burgers as the ones served at his diner in Illinois.

Despite what its name implies, Brunch will be open 24 hours a day, seven days a week, and will offer full breakfast, lunch and dinner menus.

“Food will be elevated,” using the “best” ingredients that the Daytona Beach market has to offer, said Moon, who responded to inquiries from The News-Journal via text messages. Dishes will include skillets, omelettes, fish, steak and pasta, as well as “our famous burgers,” he wrote. The price range for entrees will run from $9.99 to over $30.

Oliv Epicurean offers Mediterranean-style food where customers can build their own bowls or pita sandwiches by selecting the protein and toppings. The Oliv location at Shoppes at Williamson Crossing will be open from 10:45 a.m. to 10 p.m. daily.

Moon wrote he chose to open Oliv and Brunch at the Shoppes at Williamson Crossing because the new shopping center offers “maximum exposure to an expanding residential, commercial area, while serving all our clientele (with) meat, vegetarian and vegan choices.”

“As COVID has demonstrated, the foods we eat play an important role in the building blocks of our health and immune system. We want to bring to the area an alternative with healthy choices available,” Moon wrote.

The developer of the Shoppes at Williamson Crossing is Orlando-based Unicorp. An ExtraSpace storage center recently opened there. Construction has begun on a 7,000-square-foot AdventHealth senior care facility, said Taylor Coan, director of leasing for Unicorp.

Unicorp plans to break ground by year’s end on another multi-tenant retail building at the Shoppes. “We’ve got a few new tenants that we’re not ready to announce yet,” said Coan.

Unicorp is also the developer of a luxury apartment complex called The Edison Daytona that’s going up on a 13.7-acre site just east of the Shoppes on the southwest corner of LPGA and Clyde Morris boulevards. Construction of the four four-story building is expected to be completed by July 2022, said Katie Bucher, development manager for the development company.

The Edison will offer 262 apartment units as well as an 8,000-square-foot clubhouse. Pre-leasing of the units will likely begin in either November or December, Bucher said.

Rental rates have yet to be determined, but “are definitely going to be market rate,” said Bucher.

On the other side of I-95, Sutton Properties, the developer of the Publix-anchored Latitude Landings shopping center on the northeast corner of LPGA Boulevard and Tymber Creek Road, is clearing land on three future outparcel buildings, one of which will be a Space Coast Credit Union branch.

The developer is also making plans to begin construction next year of Latitude Landing’s second phase which will expand the shopping center eastward.

The Daytona Beach City Commission on Wednesday night was expected to approve a request on behalf of the developer to include the allowable commercial uses at Latitude Landings as well as approve the installation of more monument signs so more tenants can be listed.

Upon full build-out, the 36-acre Latitude Landings will have a total of 200,000 square feet of retail space as well as restaurants and professional service businesses.

Latitude Landings is located at the entrance to Latitude Margaritaville, the fast-growing Jimmy Buffett-themed 55-and-older community that has already grown to more than 1,500 homes in just three-and-a-half years.

← Twin Warriors are hosting the Women's PGA Cup Event in 2022 ! Murcia Today - With Micasamo, finding a home in sunny Spain has never been so convenient →