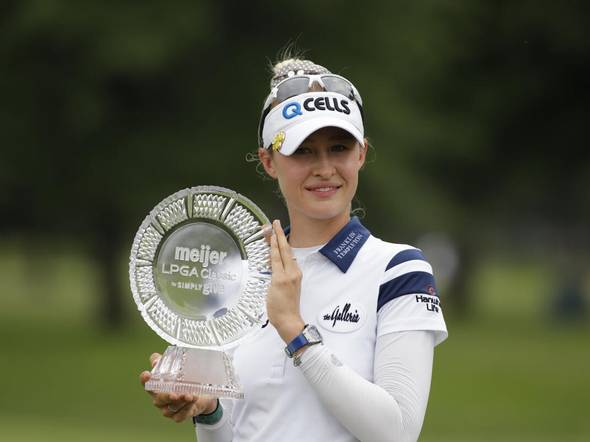 Nelly Korda went up and down to birdie on the 18th par-5 hole and prevailed against Leona Maguire from Ireland to win the Meijer LPGA Classic in Grand Rapids, Michigan, USA on Sunday.

Korda shot a 5-under 67 for her final round to finish the event at 25 under, two shots ahead of Maguire (66 on Sunday). In Gee Chun from South Korea (63) and Brittany Altomare (64) they took third place with 21.

Korda and Maguire played together in the last group and dueled at Blythefield Country Club all day. Maguire caught up with Korda to take the lead with four birdies on her top nine.

Korda pocketed an eagle at par-5 # 14 and made the following hole with a birdie to build a three-shot lead. But at # 16, Maguire birdie and Korda bogeyed to cut the lead to one.

After both players had reached par on No. 17, Korda found a thick rough just before the green on his second shot on No. 18. But Korda kept her third shot close to the hole and made a birdie while Maguire made three putt for par.

“Leona is a really good player. To be honest, she kept me busy all day,” said Korda on the show. “I had to play good golf. There are many birdie opportunities out here. I started a bit rough, didn’t hit a lot of fairways, but I kept telling myself to fight my way through and just have fun.”

It was Korda’s fifth Tour win and her second this season – the season’s first multiple winner – after a win at Gainbridge LPGA in February. It was projected to move up to # 1 in the Tour’s season points competition, the Race to the CME Globe.

Maguire failed to win her first LPGA Tour title. It was her second place that season.

The Swede Anna Nordqvist was fifth at the age of 20. Ally Ewing, Lauren Stephenson, Lizette Salas and England’s Georgia Hall shared sixth place at the age of 18.

Two Jutanugarns, two 59s and a win at the LPGA Team...