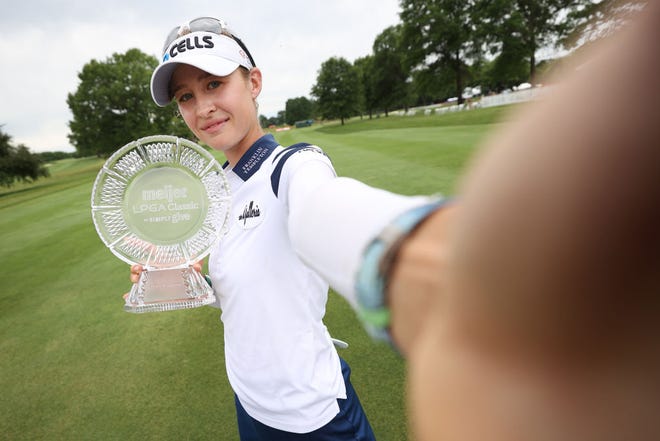 Nelly Korda is set to defend at the Meijer.

Korda, 23, the No. 2-ranked women’s golfer in the world, will headline the field at the eighth Meijer LPGA Classic, set for next week at Blythefield Country Club just outside Grand Rapids. Korda returned to competitive golf at last week’s U.S. Open following a four-month absence because of a blood clot.

She won the 2021 Meijer LPGA Classic, finishing at a record 25 under par to win by two strokes. As of early last month, Meijer officials were optimistic but uncertain if Korda would be able to play in 2022.

“I’m just grateful to be out here, honestly,” Korda said at last week’s U.S. Open, where she finished tied for eighth. “That’s what I was reminding myself.”

The only player in the top 10 missing is No. 1 Jin Young Ko.

Also in the field on a sponsor’s exemption is recently graduated Michigan State golfer Valery Plata, who made the cut at last year’s Meijer LPGA Classic and finished tied for 70th.

But it’ll be Korda who will draw most of the attention. The Meijer LPGA Classic was her second win of 2021, and it helped springboard her to a three-shot win at the following week’s Women’s PGA Championship. Korda rose to No. 1 in the world, a reign that lasted until this January.

Then, in February, she noticed significant swelling in her left arm, and was diagnosed with a blood clot. She underwent surgery in early April.

“I just tried to stay really positive and just to remind myself that this is my first week back after a couple months after not touching a club for probably the longest I’ve ever (not) touched it,” said Korda, whose sister, Jessica, a six-time winner on the LPGA Tour, also will be in the Meijer LPGA Classic field. “You don’t really expect much from your game. You don’t know where your game is at. Knowing that I can play on a really tough golf course at a major and even kind of be in contention is definitely a positive.”