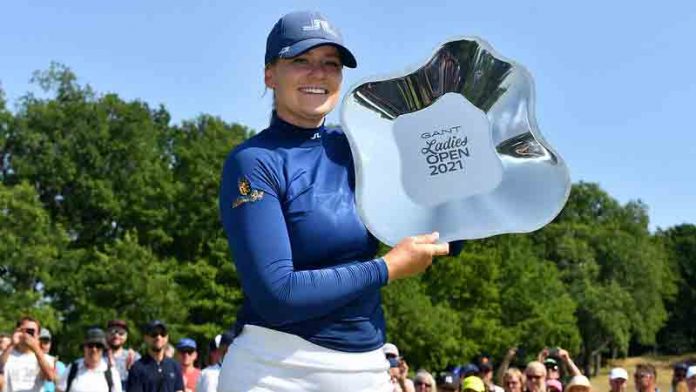 Finn Matilda Castren shot a final round of 68 to win the 2021 Gant Ladies Open by three strokes and claim her first LET title.

The 26-year-old rounded off an excellent week in which her card rounds of 71, 69 and 68 triumphed with a score of five under par at Aura Golf.

Castren said, “I’m so happy about it! I couldn’t be happier. That’s what I came here for, and it’s incredible that I made it. “

On her final lap, the Finn did a bogey and rolled in four birdies – including 16 and 17 – to seal the victory with the family.

“I hit the ball a little better today, so I had a few more birdie opportunities, but I didn’t putt as well as I’d hoped and I missed a few shorter ones. It was a bit frustrating but I really tried to be patient and believe that eventually they will fall and they made it to the right holes. It’s always nice to end well, ”she explained.

“It was great to see so many people here and also great to see the little children. Lots of people came to watch my relatives and family members – people I haven’t seen in a few years. “

After winning the LPGA MEDIHEAL championship in 2021 in June, Castren had to claim a win on the LET to become a member of the tour and be considered for the European Solheim Cup Team 2021.

She added, “My goal for this week was to win a LET membership. I couldn’t be happier making it happen and I’m just very excited. Even as a little girl, it was my dream to be at the Solheim Cup. It’s one of my goals that I knew could be possible in the future. Everything went very quickly this year and it is an honor to be considered. Hopefully it will happen and I can represent Finland and Team Europe. “

Indian Tvesa Malik and Finnish Ursula Wikstrom finished three strokes behind the winner with two under par after counting rounds of 68 and 69 respectively.

Three players finished fourth with a tie, including Atthaya Thitikul from Thailand, Marianne Skarpnord from Norway and Diksha Dagar from India.

Spanish golfer Carmen Alonso finished seventh, while Finn Kiira Riihijarvi finished eighth, with Alice Hewson from England, Magdalena Simmermacher from Argentina and Emma Grechi from France – who scored a hole-in-one on the seventh par 3 on the last day – all tied in ninth place.

At the Race to Costa del Sol 2021, Thitikul continues to lead the standings with 1272.50 points, while Sanna Nuutinen is second with 1016.42 and Stephanie Kyriacou is third.

Jin Young Ko wins on LPGA a week after losing #...

Clearview Legacy about more than just the game | LPGA