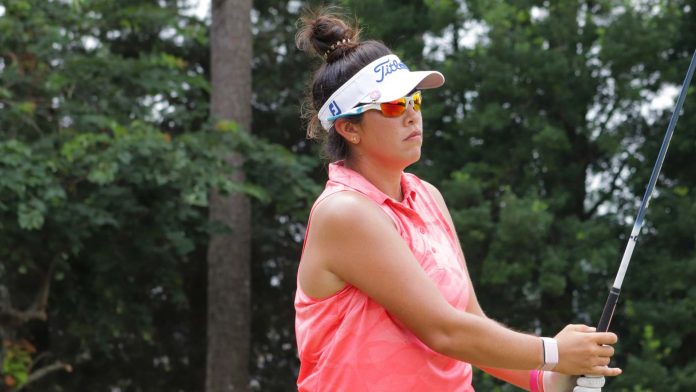 Rodriguez, a PGA Professional who works as a lead instructor at the Balcones Country Club, came in third on day two. She recorded two birdies and two bogeys on the front nine, but fired a 3-under 32 on the back to take the lead. “I hit the ball really well,” said Rodriguez. “I’ve hit my irons really well over the past few weeks. Today I finally hit my driver on the fairway and was able to do a few putts today to get a solid score. [Playing Kingsmill is] unbelievable. The greens roll really well and it’s just nice to play in another place where they’re playing an LPGA event. “

The eight top finishers in the Championship Division will receive exceptions for the KPMG PGA Women’s Championship 2022, which will be played June 21-26 at the Congressional Country Club in Bethesda, Md. Rodriguez. Knight, Grier, Connelly Eiswerth and Changkija all competed in the 2021 KPMG Women’s PGA Championship at the Atlantic Athletic Club, after finishing in the top eight in last year’s PGA Women’s Stroke Play Championship at the PGA Golf Club in Port St. Lucie, Florida came. The 2020 LPGA Professionals National Championship has been canceled due to COVID-19.

“Going back would be incredible. I had two juniors who watched me play the KPMG game and showed them that I can do it. It’s really cool for them to keep pushing and hopefully one day play professionally, “said Rodriguez, who made her first LPGA start at the KPMG Women’s PGA Championship in 2021.” I’m just trying one shot at a time and to make one hole after the other and position myself to have a chance tomorrow, that’s exactly where I wanted to come into play. “

HIRST REMAINS IN THE CHALLENGES DIVISION WITH ONE BLOCK LEAD

Division leader challenge in the first round Charlaine Hirst (Pinehurst, NC) continued to top the rankings after day two of the Voice Caddy-presented LPGA Professionals National Championship. Hirst, who is fighting for her fourth straight title, said she had a wonderful experience at the Kingsmill Resort despite some ups and downs. The bonding time with her daughter, her caddy for the week, remains the icing on the cake.

“The second day was a struggle from the start. I hit the driver really well, but I couldn’t get the fairway clubs that I hit really well with yesterday. And the putting was good today, but I missed a lot of doable birdies and putts, ”said Hirst. “[But being with my daughter] was just as good, if not better. I just had a good time and a good group so it was a nice relaxed day. And my Pro-Am team stayed another day, so I was more relaxed today than yesterday, when I was a little tighter. “

Charlaine and Allie Hirst prepared for the round on Monday with evening shopping. As the mother-daughter duo set their sights on the final day, Charlaine said they will stick to a similar schedule.

“I’m going shopping again, that’s my instruction,” said Hirst. “And we still have to go to a thrift store today. But I’ll just do what I did [yesterday] – Sit in the hot tub, go down the lazy river and do some putts tomorrow. I only have to do them when they have to be done. “

“Today we decided on the Team Steph and Sara Solheim Cup theme, so we are Team Europe and Team USA. I was trying to get some European luck out there on the golf course, ”said Pareth. “I couldn’t scare the hole if I tried, but otherwise I’m solid. I’m really happy with how my game has shown over the past few days. I got a little tired on the second nine, but there haven’t been any disasters so this is new to me. I am very happy to be in this position. ”

ROUND SECOND GAME SUSPENDED FOR THE SENIOR DIVISION

The second round of the LPGA Professionals National Championship, presented by Voice Caddy, was suspended at 3:48 pm due to bad weather in the area. The game was officially launched at 6:28 p.m. as conditions did not improve.

The winner of the championship 2016 Lisa Grimes (Gold Canyon, Arizona) is two strokes ahead of the 2018 senior class winner Barbara Moxness (Rio Verde, Arizona) through 27 holes.

Ashley Grier (T2, -2) about her putting in the second round:

“My putting saved me today, which was nice. I had played with my father about a week ago and I hadn’t played with him in years. He played so well, so I stole a tip from him and it saved me for sure this week. “

Allie-Ritter (K2, -2) about the possibility for LPGA and PGA professionals to measure themselves at this level:

“It’s great. It’s just a great opportunity to get into an LPGA major. It’s huge and you can’t beat it.”

Stephanie Peareth (T2, +9) about the competition at Kingsmill Resort