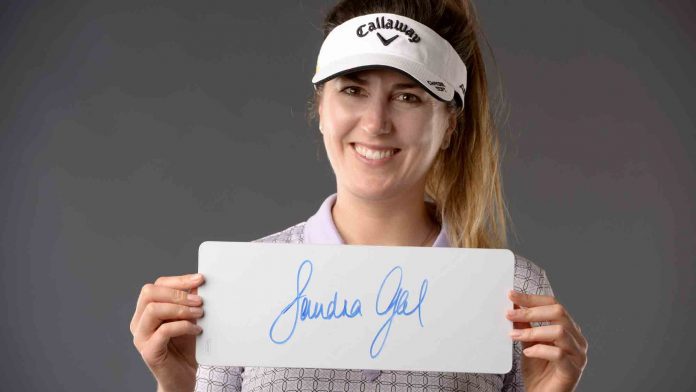 As Americans prepare for a return to normal on this Independence Day, it is good to ponder those who, like many of our ancestors, came to America as immigrants, uncertain of their future but determined in their pursuit of freedom and a better life. Last spring, the United States welcomed a new citizen whom almost every fan of women’s golf will recognize. On Thursday, May 20th, Sandra Gal raised her right hand and swore to become an American.

“It was a natural, evolutionary process for me,” Gal told LPGA.com. “I played here in college [at the University of Florida] and if you come from Europe you can get a visa. Then you can apply for a green card which I did. After you have had your Green Card for five years, you can apply for citizenship. I did that a few years ago.

Born in Germany, she has been one of the most popular members of the LPGA Tour since her membership in 2008. As the winner of the Kia Classic 2011, she also represented Europe in the 2015 Solheim Cup team in her home country.

“I’ve been here for 16 years [in the United States] and it has felt like a home away from home for a while, ”said Gal. “And now to be able to officially call it my home is great.

“The green card” [given to legal foreign residents] is quite restrictive on the time you can spend in the US and how much you can spend overseas, which was difficult to manage given the tour life and the amount of travel. As a citizen, it is definitely easier for me to decide where I want to live and how much time I want to spend here.

“I think in the beginning America was the only country where I could get an education and continue playing golf at the same time,” said Gal. “I wasn’t sure I wanted to go pro at the time, so it made sense [to come here]. I only stayed here for two weeks before going to college [in Florida]. It was obviously a dream. You start writing coaches and applying to colleges early in high school. So before I set foot here, everything seemed exciting and far away. “

As with most first-time visitors, there was a transition period.

“The first year was difficult for me,” said Gal. “But I’ve made friends and I’ve obviously made my career here. I love freedom and that I was able to pursue so many different things besides golf. Meditation retreats, being part of nature, staying at tournaments with different families, all of these opened my eyes to many different things. I love Europe and I love the States. Each country has its advantages and disadvantages and I am very grateful that I can choose. There are many people who do not have this choice or this freedom. “

These are, among other things, the things many native-born citizens take for granted, along with the history and government questions that must be answered by those who deserve their status as American.

“The test wasn’t that difficult for me,” said Gal. “You have 100 questions. And you have to get six out of 10 right. I think now the pool is 200 questions. But I learned a lot of that in college in my history class. “

The most difficult aspect of the process for Gal was getting to the swearing-in ceremony. The day before she was supposed to become a US citizen, she was on the court at the Kingsmill Resort and waved to Anne van Dam as she played in the Pro-Am.

“I planned my trip to Kingsmill to meet some sponsorship commitments,” said Gal. “Well, I arrived on Sunday evening [before the event] and then the first thing on Monday morning I got an email telling me I was supposed to be at the Tampa immigration office at 7:30 a.m. on Thursday to take my oath.

“I had gone to Virginia with my boyfriend and I had plans to do a few things by Wednesday afternoon. So we went to Washington Wednesday night and I took a direct flight to Tampa. And then, after I took the oath, I flew up again and we drove home. “

It was a whirlwind experience, but she wouldn’t trade it for anything. As difficult as the logistics were, they presented an opportunity for Gal she will never forget.

“The day I took my citizenship oath after being blown up again [to Reagan National airport in Washington], I have to walk around them [outside of the] White House, ”she said. “That was really cool.”