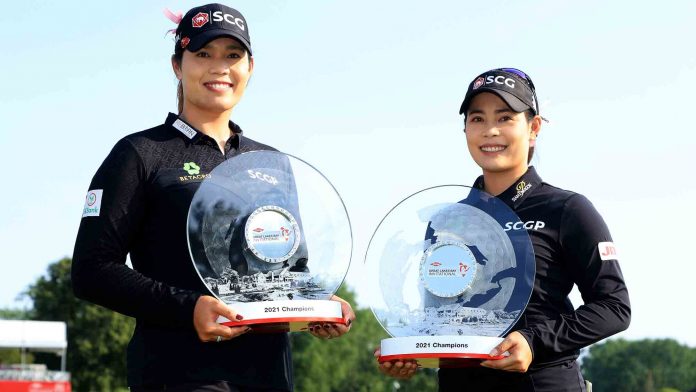 MIDLAND, Michigan | At least they didn’t cry. On the other 12 times either Moriya or Ariya Jutanugarn won an LPGA Tour event, the other sister was a seething mess and didn’t even try to hold back the tears of joy she poured on her sibling. But when they teamed up to a victory, as they did on Saturday with a stellar fourball 59 at the Great Lakes Bay Invitational to end week 24 under par, there was nothing. No whimpering and no wet eyes among them.

“I had tears when she went into the water at the last hole. I say, Mo, come on, ”Ariya said with a laugh, referring to her sister’s chubby iron strike on the final par-3, which found the pond around the green.

“I would say maybe it was because we didn’t really think about winning the tournament. We only had a little excitement, especially on the last hole. But we just thought that we should really enjoy every moment on the track. “

Team M&M for Mon and May, family nicknames by which they are commonly known, started the day at 13 under and in a crowd of two shots behind the lead, shared by defending champions Cydney Clanton and Jasmine Suwannapura as well as Aditi Ashok and one other Thai, Pajaree Anannarukarn were held. Not only were the Jutanugarns not in the final, they weren’t in the penultimate or penultimate grouping either. Though victory was a foregone conclusion after May rolled a 35-foot hole on the final hole for birdie, they had time to chat with Jim Gallagher Jr., who was down with the CBS group, and then something Spend time with local reporters before signing autographs, video calling their family in Thailand, playing with their dog and checking their text messages before the trophy handover.

“After (Mon) fired her first shot (into the water at 18), we talked a lot – ‘Would you like to hit another one?’ And we thought you shouldn’t hit, “May said.” Then when I saw my 35-foot putt, I thought make sure I put two putts or I’ll get her to step back and hit off .

“I didn’t want this to happen so I said to myself, make sure you do two putts. And I just did the putt, so, yes. “

That putt crowned an 11 birdie day for the sisters and a week that made everyone overjoyed. Midland, Michigan and Midland Country Club couldn’t have been more accommodating.

“It reminds me of what the Corning Classic was like back when the whole town came out and made it special,” Dottie Pepper told me on Friday after walking across the golf course. Pepper was part of the CBS crew that gave the Dow the kind of coverage it deserved. “The flowers by the roadside that come here; the fact that everyone in town is talking about the tournament and welcoming everyone – it’s really special. We need more places like this. “

And we need more winners like the Jutanugarns, whose sisterly skirmishes after the win were exactly what you would expect. At some point May, the younger of the two, said something in Thai and Mo, always the older sister, turned her head and rolled her eyes.

“When we’re on the golf course, most of the time we don’t really talk about golf,” said Mo. “But today it seems like we’ve talked a lot more about golf. Rather, it was more like I kept complaining that my putts weren’t going into the hole and she kept putting on them. I thought, ‘Oh, she’s going to beat me because the last time we tried to count who got more birdies.’

At this point May interjected, “Still me.”

Mo shook his head and said, “This time it still is. But that’s ok. Thanks for that too.

“I would say we talked a lot more about golf (today). But we also tried to reassure each other by simply saying, ‘We have this.’ “

They actually did. The strategy that brought the two to the finals seemed to work perfectly.

“Last night we talked about the flight because we have a flight to Evian (France) tonight,” May said. “We said, ‘Should we change the flight or not?’ We decided not to change it. But I said, ‘Okay, run to the car quickly. We have to drive two hours if we want to make the flight. ‘

“But just before we started teeing off, I went to my sister and said, ‘You know what, Mo, the goal today is to do birdie on every hole. I don’t care if we both do bogey. When we do bogey, we try to do birdie again afterwards. That’s the goal for today, ”I told her. And we agreed to have the same goal. “

Mo agreed. “I felt like it was about dynamics out there and we had pretty good dynamics in the beginning,” she said. “It’s more like supporting each other and I’ve had a lot of support from my sister this week. No matter what, she probably hit some trees out there, but she still made a lot of little birds for me, so I forgive her. We really enjoyed it. “

There was another collective giggle. Then came the inevitable follow-up question. Did you fly to France?

Another inspiring moment for Amy | LPGA