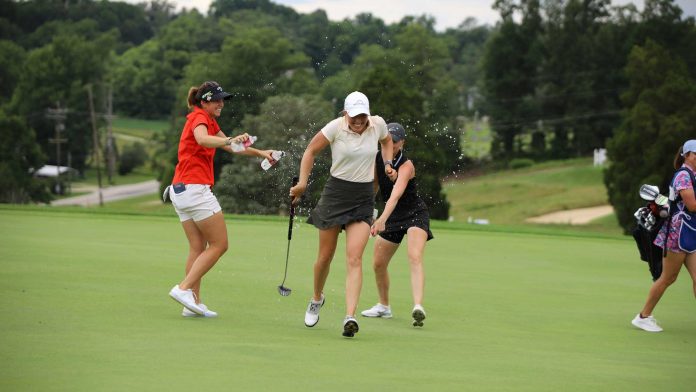 That win was different for Casey Danielson.

When the Stanford alumna won the Symetra Classic in Davidson, NC in May, it was all a new experience. Now, battle-tested and eager to prove himself again, Danielson carded a 3 under par 68 on the final round of the Donald Ross Classic to claim her second victory on the Symetra Tour.

Danielson finished the week on the Donald Ross Course at the French Lick Resort with a total of -10 points and took the win by one. The performance comes after missing the cut in three of her last four starts.

“There are many ups and downs in any golf career,” said Danielson, who typically hit 17 greens on the final round. “I definitely learned a lot from the win and was a little ahead of me, I hate to admit it. Expectations came and made my golf game a little messed up because I wasn’t able to stay mentally present during a round.

“There were definitely some tough times on the island [Donald Ross] Of course, to stay present, especially today in the competition, in the bottom group. All the work I’ve done really paid off to fight it. “

An eagle on the drivable par 4 11th played an essential role in the search for Danielson’s winning circle.

“It was really fun to hit my drive so close to number 11,” said Danielson, who scored three birdies today alongside the eagle. “Going 2-under on a hole definitely helped and relaxed my mindset. It was just fun and on the next hole I did a long putt for birdie. It helped me stay in it and get ready to bring it home. “

While it’s the first win for Danielson at the French Lick Resort, it’s the second for the Danielson family. In the men’s golf championships of the Big Ten Conference in 2014, her brother Charlie shared the medalists on the Pete Dye Course in his sophomore year at the University of Illinois.

“I believe my sister [Lindsay] also played here. She played for them [Wisconsin] Badgers so it’s really special, ”Danielson said. “I’ll be sure to talk to my brother about it. Good memories for our family, we enjoy talking about them. I come here alone, but my brother and parents are here, they know the area and it’s comforting that this is a family affair. “

Beth Wu (68) took her second place in six starts on the Symetra Tour this season, while Rachel Rohanna signed a straight par 71 on Saturday with 36 holes and finished third. UCLA alumna Lilia Vu fired a bogey-free 65 for a total of -7 and shared fourth place with Amanda Doherty (68), which rounds off the top five competitors.

Michelle Estill is betting on the US Senior Open