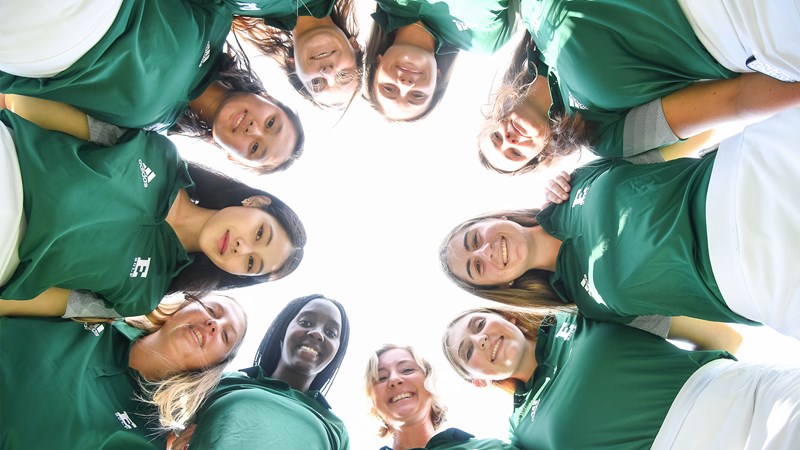 For the fourth time, Eastern Michigan University’s women’s golf program is hosting a tournament on the team’s home course at Eagle Crest Golf Club October 4-5. The Shirley Spork Invitational starts on Monday at 9 a.m. with 36 holes in continuous operation. The final round is scheduled for Tuesday at 9 a.m.

Named in honor of the first woman to be inducted into the E-Club Hall of Fame in 1981, Shirley Spork began her golf career early in life. She started playing with a club, a putter, when she was 10 years old. While attending MSNC at the time, Spork won the Women’s District Match Play Championship three times in four years. In 1947, she was the winner of the very first National Collegiate Championship for women’s athletics, and she was the winner of the 1949 Michigan Amateur.

Upon graduation, Spork became a Detroit public school teacher, but realized that she would much rather play golf. She turned pro and toured in 1950, but realized she was still a teacher, so in 1959 she co-founded the LPGA’s Teaching and Club Professional Division with Marilynn Smith, Betty Hicks, and Barbara Rotvig.

Spork was the first LPGA professional to conduct golf courses abroad and was two-time LPGA Teacher of the Year (1959, 1984). She was Chair of the LPGA T&CP Division from 1960-66 and received the Meritorious Service Award in 1989. Her honors include the 1994 Byron Nelson Award, the 1998 LPGA Ellen Griffin Rolex Award, membership in the founding class of the LPGA Teaching & Club Professionals Division Hall of Fame in 2000, and inducted into the Michigan Golf Hall of Fame in 2002. Spork was recently inducted into the 2019 Professional Golfers’ Association (PGA) of America Hall of Fame as one of the newcomers.

Fans can watch live scoring on GolfStat.com. The entrance to the event is free.