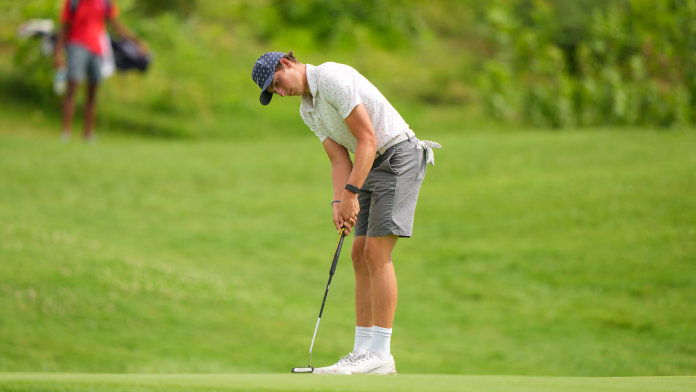 Fighting storms in the Lexington area, which resulted in two stoppages in the start, looked like wet conditions would challenge the field in the second round of the 45th Boys Junior PGA Championship at Kearney Hill Golf Links on Tuesday.

Instead, low scores littered the scoreboard in the morning wave, with 16 players shooting below average, making room for new names at the top of the leaderboard.

Ben James, 18, of Milford, Connecticut, shot a bogey-free 5-under 66 to take the lead. James, who is # 4 on the Rolex AJGA rankings and a commit from the University of Virginia, registered five birdies that day. His 54-hole score of 133 has him 9 under par.

“We left early so the greens were in really good shape,” said James. “I hit a lot of greens. I think I hit 16 greens so I watched birdie a lot. I ended up doing five of them. So I kept the ball in play most of the time on the fairway and ended up playing old-man golf – fairway and green. I’ve putted well and done some good par saves on the par 3, which are pretty challenging. Just kind of from the fairway to the green, so nothing special, I would say. Simply steady. “

William Jennings of Greenville, South Carolina moved up five places on the leaderboard and finished second after shooting 4 under 67. Like James, he banged five times, including three in a row on holes 5, 6 and 7.

Round one leader Nick Dunlap, of Huntsville, Alabama, came through 14 holes before play was interrupted. At the same level for the round before the game was interrupted, he is in second place with 7 under for the championship draw.

Four other golfers joined James that day, 5 under 66, making it into the top 10. The biggest jump came from Cayden Pope, a Lexington and Auburn University hired man, who improved 24 places. Pope put in five birdies and landed a Big Eagle in 14th, pushing him 5 under 137 for the championship in seventh.

“I didn’t get off to a good start, passed 1 after 4 and then got called for rain on the fifth hole,” said Pope. “I knew I had a good shot up there in time when I looked at Adler. So I went into the rain delay with a good feeling, came out again and did the putt. Birdied the next hole. The next hole was called up again because of rain, so it was really a front nine every now and then, but then it went into the round on the back nine, made four birdies and played solid. “

Pope wasn’t the only junior to take a big jump. Max Herendeen of Bellevue, Wash. Climbed 14 spots and shot a 5-under 66 on Tuesday to join a three-way tie for fourth place at 6 under par 136, with Ohio State Topher Reed (32-35– 67) committed. from Fairview Park, Ohio, and Tennessee commit Caleb Surratt (34-33-67) from Indian Trail, North Carolina.

Two other players are in seventh place, including Matthew Troutman of Louisville and John Wild of Glen Ellyn, Illinois, who took six birdies in the second round to get 5 under 66.

Eight Kentucky locals compete in the Boys Junior PGA Championship this week. Below are their results in the second round: