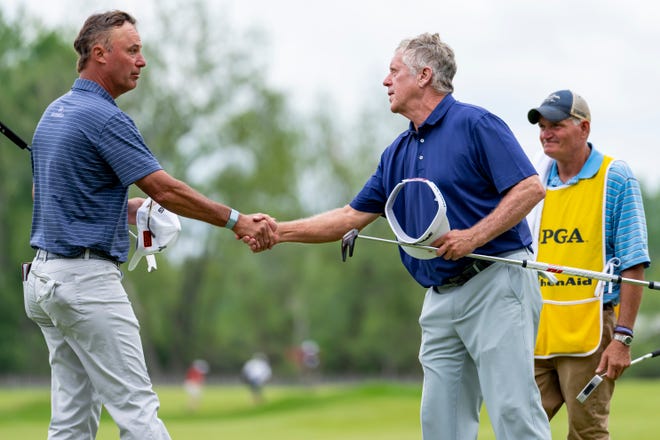 BENTON HARBOR, Mich. — There must be something in southwest Michigan that agrees with Chris DiMarco’s golf game. Whatever it is, the 53-year-old DiMarco hopes it continues for the next three days in the KitchenAid Senior PGA Championship at Harbor Shores.

Thursday, DiMarco was one of five golfers who managed rounds of four-under 67 around the par-71, 6,734-yard Jack Nicklaus design which is hosting its fifth Senior PGA since it opened in 2010.

“It’s hard to remember back that far … obviously I have some great memories from there (The Point),” DiMarco said after making some more in his first official round at Harbor Shores in cloudy but ideal scoring conditions in the morning.

► Bernhard Langer:Germany’s Langer has priorities in order for Senior PGA event in Michigan

His round featured six birdies, including five in a six-hole stretch beginning at the 417-yard sixth hole.

Not bad for only his second trip around Harbor Shores. “I like good undulating greens that have a lot of imagination to them,” added DiMarco, who played a practice round Wednesday.

Another three golfers — PGA Tour Champions leading money winner Steven Alker of New Zealand, Stephen Ames of Canada, and American Duffy Waldorf — had reached four-under in the afternoon as light rain began to fall on the course that got more than an inch overnight.

The 51-year-old Cejka, who had four birdies, three of them in a four-hole stretch beginning at No. 8, has only played three times in preparation for his defense. But he’s already got an idea what needs to be done.

“You’ve got to drive it well,” Cejka said. “That’s what I did today. My goal is just to find a lot of fairways. If I do, I can attack the pins. It all depends on the weather the next couple days. If we have weather like this — the last couple of (times) it was here — it was low scoring.”

← From their tees: Millington female had to play with the boys, now off to Alma College golf Puma Women's Laguna Sport Golf Shoe Review →