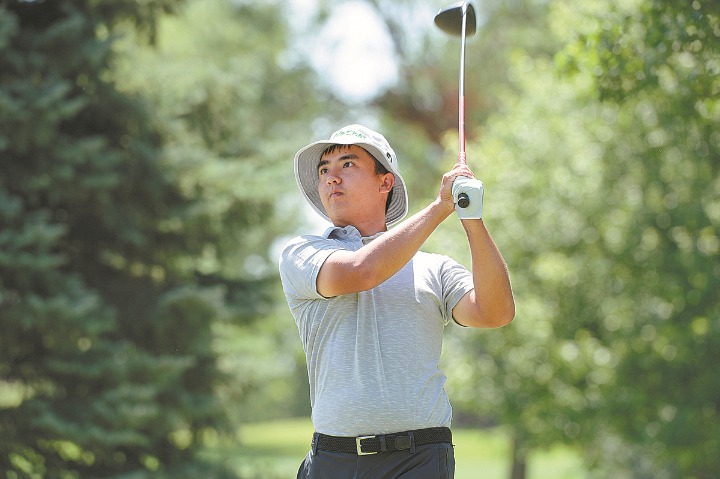 Marty Dou Zecheng tracks a shot during the final round of the Pinnacle Bank Championship of the Korn Ferry Tour at The Club at Indian Creek on August 15 in Omaha, Nebraska. [Photo/PGA TOUR]

Chinese Marty Dou Zecheng knows exactly what is at stake in the top 6 when the 2020-21 season of the Korn Ferry Tour ends, in order to advance to the PGA Tour or tackle another challenge in the next 12 months.

With one event yet to come this week – the Korn Ferry Tour Championship – Dou needs a predicted sixth place or better at the Victoria National Golf Club in Newburgh, Indiana to stand a chance of moving into the top 25 from his current 70th position leap.

Winning is not uncommon for the talented Chinese as he celebrates two victories on the Korn Ferry Tour – the 2017 Digital Ally Open and the 2019 Bahamas Great Exuma Classic. He also holds four wins in the PGA Tour Series China.

He was hoping to finish for a tied runner-up at the Pinnacle Bank Championship last month before the Korn Ferry Tour Finals kicked off, but he hasn’t repeated that form in the past two weeks.

“It’s been very competitive the past two weeks,” said Dou, who spent a season on the PGA Tour in 2018 after being promoted from the Korn Ferry Tour.

“A lot of great players who were very successful on the PGA Tour came to the Korn Ferry Tour Finals to play and to have more opportunities.

“I’ve played with An Byeong-hun and I’ve learned from these great players. They try hard and keep their mentality whether things go well or not.”

Dou has got five top 10 finishes and eight other top 25 finishes this season, and said this was mostly due to the good work he has done with swing coach Cameron McCormick over the years.

“I feel like I have a more stable golf swing in the 2020/21 season. Although I didn’t make it through some events, I have more top 10s and I was able to make more cuts,” he said.

“I’m happy with myself. Mentally I also feel more mature compared to the last two years.”

He acknowledged that international players on the Korn Ferry Tour are facing challenges to establish themselves in the US, but he is ready to stick with it and play his way back to the PGA Tour. If it doesn’t happen this week, in his opinion, it is only a matter of time before he can compete again alongside the world’s top stars.

“Players like me who travel to the US to pursue our golf dreams can be tough,” said Dou. “Our friends, family and home are all in China, and I’m under pressure too. Sometimes I have too many thoughts at important moments in a tournament. Confidence is important to take the pressure off. I feel good and think I’m good at it Shape this week. “