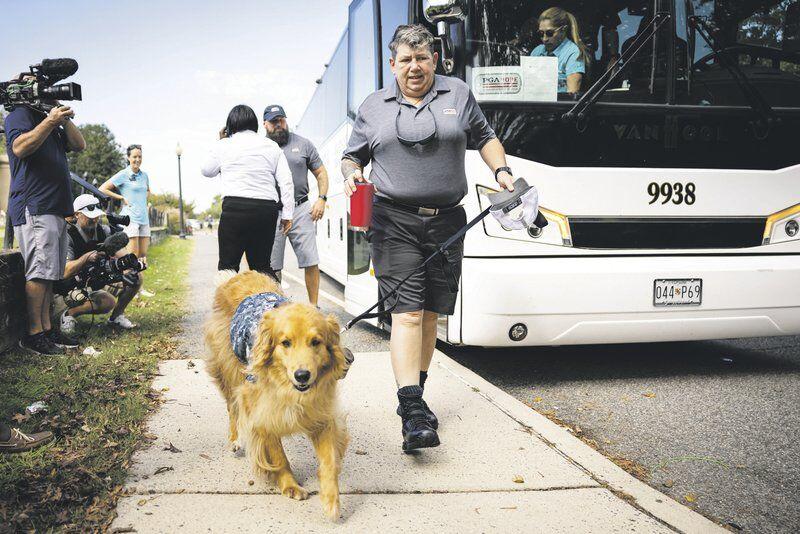 An ad broadcast during the 2019 Masters tournament changed the life of a Downsville woman.

Rhonda Liddell said she watched Tiger Woods comeback when she saw an ad for PGA HOPE (Helping Our Patriots Everywhere) and became interested in the program. The PGA HOPE program is part of PGA REACH, a 501 (c) (3) charitable foundation of the PGA of America that, according to its website, also oversees the PGA Jr. League and PGA WORKS programs.

PGA HOPE is a national program introducing golf veterans to improve their physical, mental, social and emotional wellbeing, according to a media release. Under the guidance of PGA Professionals, the program is offered to veterans free of charge, and there are 165 PGA HOPE chapters across the country that “positively influence more than 3,500 veterans annually,” the press release said.

Liddlell joined the PGA HOPE Northeastern New York program, she said. The only drawback was the closest golf course that offered the program was in Colonie. She made the commitment and traveled the two hours each way to the town of Colonie Golf Course to take part in the six-week program.

“I didn’t even know if I would be able to swing a club,” she said.

Liddell said she was 100% disabled and could only swing a club with one arm. Liddell is a U.S. Navy veteran who served from 1986 to 1993 and served during the First Gulf War, she said. She suffered her life-changing injuries when she was hit by a drunk driver while on duty. She suffered a traumatic brain injury and has post-traumatic stress disorder, she said.

Liddell said she is a single mother of two productive young adults and the injury she suffered while on duty gave her the financial stability to raise her children. She said she grew up in Liberty, but her mother moved to Downsville. After she was injured, she struggled with PTSD and was advised to move closer to home, so she moved to Downsville, she said.

After her kids left college, she was trying to find something to do when she saw the above commercial. She and her service dog, Remy, traveled to and from Colonie for 6pm class for six weeks, and she “fell in love with the game,” she said. Remy loves the game too, she said.

Liddell said she practices in her front yard and travels to Windham Country Club once a week. The Adaptive Sports Foundation has a partnership with the golf course that allows them to play on the golf course for free at any time.

She has continued the course for the past two years and has been nominated to travel to PGA HOPE National Golf & Wellness Week 2021 at the Congressional Country Club in Bethesda, Maryland.

“I’m not one hundred percent sure how I was nominated or selected,” she said. “They only select 20 veterans nationwide. I know they wrote about my commitment to the program.”

The program took place October 14-18, and “the weather played along,” she said. “It was very warm in the 80s in DC for the first two days, then it was windy and cooler, but nice the other two.”

The veterans who participated in the program took classes on and off the golf course, she said. They took courses on how to use social media to engage people, work-life balance skills, public speaking, and stress management.

“The first day we got to play golf at the East Potomac Golf Course,” she said. “We chipped and putted and had a nine-hole scramble. On the second day we had to use a swing tracer.”

She said even with one arm she was swinging the bat at 64 mph.

The rest of the stay they played at the Congressional Country Club, and each veteran was given their own locker, she said. There they played 18 holes of golf. After the course, she was named the program’s ambassador and gave her first public presentation on the program at Saratoga National Golf Club on Monday.

She said she hoped her speaking engagements will expand the program as it is only offered in the colony. She said she would like to get SUNY Delhi or the Meadows in Margaretville to offer the program.

“I know I could get 20 vets together and make the program a success,” she said.

“I recommend it to any veterinarian who has ever had a interest in golf,” she said. “It doesn’t cost any money other than gasoline.”