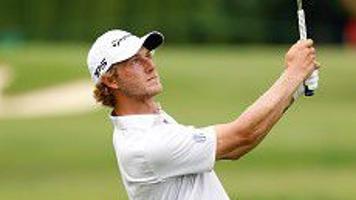 Smotherman is from Loomis, just off Interstate 80 in Placer County. Graduated from Del Oro High School in 2012, he completed his preparatory career victoriously, winning the CIF State Championship that same year.

He played four years of college golf at Southern Methodist University, where he was twice named to the All-American Athletic Conference, with nine top 10 finishes for the Mustangs. He was also selected All-Conference USA. As a junior he was elected to the PING All-Central Region team.

In 2016 he turned professional and finished in tied 10th place at the US Q-School. From there he played on the PGA Tour Latinoamerica during the 2017 season and garnered six top 25 finishes. He won the Mexican Open at the Tijuana Country Club in 2018.

He started on the Korn Ferry Tour in 2019 and last May won the Simmons Bank Open for the Snedeker Foundation at The Grove in College Grove, Tennessee. It’s his second win since turning pro.

Smotherman is one of 25 rookies in this week’s Fortinet Championship, a $ 7 million event broadcast on the Golf Channel. This is only his second PGA Tour event as he missed the cut at AT&T Byron Nelson in 2017 when he was playing at the invitation of a sponsor.

The difference between the Grain Ferry and the PGA Tour?

“Everything is so big,” he said. “You have a three-story grandstand behind number 18, which we are looking at right now. And the extent of having more media on site. We are currently setting up concerts. It’s just the grandeur of everything that you can somehow get caught up in it. But you know, golf is still golf. We’re playing 72 holes out here this week. “