Goydos Brings a Ray of ‘Sunshine’ to the Senior PGA Leaderboard 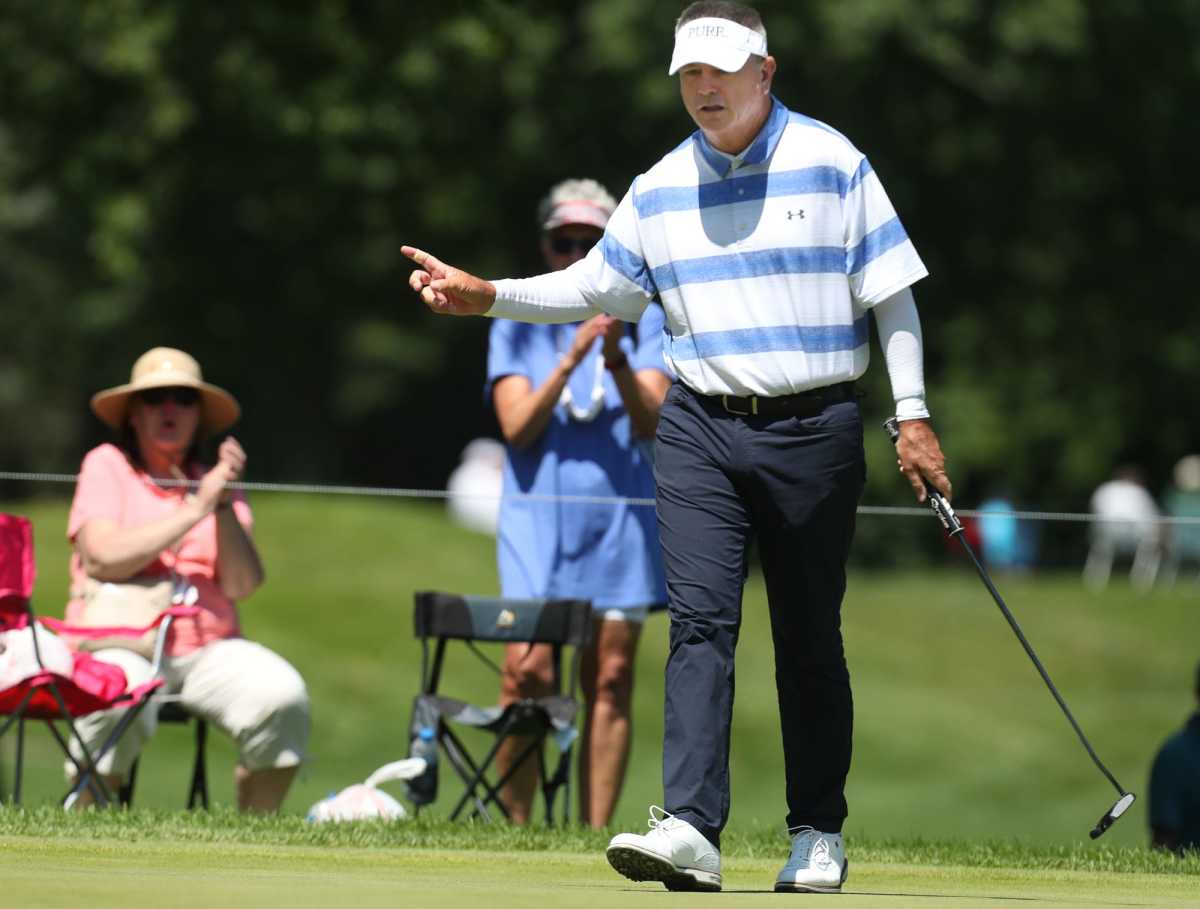 Paul Goydos, whose nickname on Tour is “Sunshine,” is looking for his first major title on the PGA Tour Champions in Sunday’s final round of the Senior PGA Championship.

BENTON HARBOR, Mich. – Paul Goydos is near the top of the leaderboard after the third round of the Kitchen-Aid Senior PGA Championship, just three shots off the lead of Stephen Ames.

It’s not written often about the 57-year-old journeyman, who, by his own admission, has melted under the heat of major championships, even if this is a major on the PGA Tour Champions.

In Goydos’ case, the definition of journeyman is a player who has won twice on the PGA Tour, five times on the PGA Tour Champions and has pocketed just short of $20 million in total earnings over his 34-year career.

Posting a 4-under 67 on Saturday to put him at 9-under par through 54 holes, Goydos has put together his best three rounds in a long time, again by his admission.

“I haven’t played that well this year,” Goydos said of a season that has seen him register just a single top-10 in Mississippi. “I had a couple good rounds here and there. I’m going with, I’ve gotten old. I’m on the older third of this tour now, which means something on this tour.”

With three rounds in the 60’s, Goydos credits his tee-to-green game over the last six weeks with what has been going well and at the same time his short game has been lacking.

Concentration has been a consistent issue for Goydos and while he believes in his game, he has called himself “dumber,” which has made it harder to shoot good scores.

If you go to the big picture, when I was 50 years old, and you told me when I was 57, I’ll be 58 next month, then I would have won five times out here. I’d say, that’s pretty good,” says Goydos, whose nickname on Tour is “Sunshine.”

“But if you’d told me when I was 53 and I just had won my fifth event, that you’re only going to win five times out here. Well, that’s not very good.”

Goydos has never been accused of being consistent and now instead he is trying to let things happen and stay patient, but age has produced a scenario where Goydos is becoming much less patient.

A self-professed plugger, Goydos knows that plugging along in Sunday’s final round will not get it done and would need to putt a little better.

With potential winds of 25 mph for Sunday’s final round, Goydos believes that the Jack Nicklaus-designed Harbor Shores will play more difficult in the winds due to its large multiple shelved greens.

“I haven’t ever really competed that well,” Goydos said of his dismal Champions Tour record of only four top 10s in 29 majors. “This is probably the best spot I’ve been in any major, whether the regular tour or this tour.… It’s kind of new territory to me.”

Goydos said if you look at the really great players, Nicklaus and Tiger Woods, he believes he is a 20-handicapper in comparison.

“Tiger was just relentlessly patient, relentlessly patient and then Jack talked about, it was more about other guys losing than it was him winning a little bit,” Goydos said. “(Brooks) Koepka talks about it, which the thing about Koepka when he was playing his best golf when he was healthy, he would know how to play those golf courses. It is harder.”

Getting back to the Sunshine nickname, Goydos would like you to believe it comes from his birthdate, June 20th, one of the longest days of sunshine of the year, but that is not it.

The first reference to Sunshine came from a PGA Tour media official, Mark Mitchell, who always said that Goydos can always find a cloud in every silver lining.

Goydos also has a face that never seems to smile, which tends to support the moniker.

“There’s a physiological thing, it takes two muscles to smile and 40 muscles to frown. That’s not true,” Goydos said. “For me, smiling feels like it’s hard.”

Yet smiling or not, Goydos will talk your ear off and has an opinion about everything.

On the fifth hole Saturday, Padraig Harrington was in the group in front of Goydos and was laboring with what seemed to be a pinched never in his neck.

Needing medical assistance, Goydos’ group played through and once they got to the ninth hole the officials told the Goydos grouping they were out of position.

Goydos explained that was impossible since the group that started in front of them was now behind them.

The official explained that once’s they played through, the group now assumed the time and position of the Harrington grouping, basically losing 10 minutes.

Goydos, who could not accept that logic asked if that was written somewhere about losing the 10 minutes.

Of course, it wasn’t and Goydos moved on, but it speaks to how Goydos approaches life, always talking and discussing, maybe even too smart for his own good.

“It takes different skillsets,” Goydos said of winning majors. “Unfortunately, I don’t have any of them. That’s why I was never in any majors. I need a major like Sony at Waialae, is what I needed.”

← Van Buskirk bogged down in planning, final plan pushed to fall 2023 One injured after shooting at disc golf course →