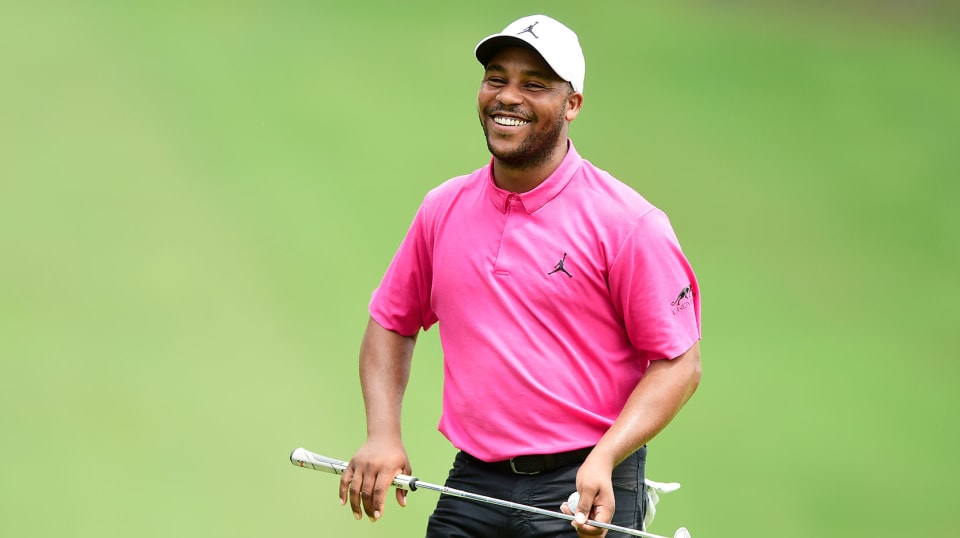 Today the course is called Catawba Creek. But back then when a 9 year old Harold Varner III started playing there it was known as Gastonia (NC) Municipal.

When he finally got a job at Gaston Country Club, where he did everything from range selection to maintenance, Varner had gaming privileges there. He was also under the transformative direction of Bruce Sudderth, a highly respected teacher who is a member of the Carolinas PGA Hall of Fame.

Varner still sees some of those “old men” he met and played with as a precocious child – and sometimes hit in the weekly dogfights – in Catawba Creek. And he fondly remembers the Par Busters, a group of mostly African American golfers that included his father, who kept a young player like him at bay.

“It takes a village to raise a child, and Gastonia is obviously my village,” says Varner of the 75,000-inhabitant satellite town just outside Charlotte, North Carolina.

“Obviously the members of the Gaston Country Club, the old men of Gaston Municipal and then the Par Busters basically raised a little kid and turned him into a man.”

Varner knows the life lessons he learned in these clubs and which were just as important from these men as the ones he received at the Sudderth training ground. That’s one of the reasons he wanted to get involved with Youth on Course, which provides affordable access to golf for children ages 6-18.

The organization is “closest to my trip,” explains Varner.

Children enrolled in the Youth on Course program can play and play 18 holes on more than 1,400 golf courses in the United States and Canada for $ 5 or less. The organization also offers caddy and internship programs and has awarded more than $ 2 million in scholarships.

“I think it’ll make a big difference,” says Varner. “I think it will do exactly what I expected any other organization to do – give a child the chance to play golf. …

“You will learn a lot from the people you meet, how to talk to people, how to treat people and then get better at golf.”

But Varner has given the nonprofit more than just his name as an ambassador. His own HV3 foundation is a major supporter of the Youth on Course program and its facilities affiliated with the Carolinas Golf Association.

The more than 50 golf courses involved include Forest Oaks Country Club, which was once home to the Wyndham Championship; Pine Needles Lodge & Resort, which is hosting its fourth US Women’s Open and 1st, 3rd and 5th places at Pinehurst Country Club next June.

“Harold has been a vocal champion with our organization for years, not to mention his significant financial contributions, which have made a huge difference to young golfers in the Carolinas,” he said when the partnership was announced earlier this year.

So what’s the best lesson the 31-year-old learned from the people in his village as a teenager?

“There are many of them,” said Varner, who became a father last weekend when Harold William Varner IV, also known as Liam, was born. “Yes sir, no sir, and thank you and please go a long way. We’re not doing that now. Like, it’s unheard of. It’s how unusual.

“For example, if you hear it – for example, (Hideki) Matsuyama’s caddy basically showed respect for the golf course (by going after the Masters on 18th. When did respect become a shocking thing?”

While golf is clearly a focus of the AJGA’s HV3 Foundation All-Stars and the other tournaments it runs for children, Varner’s Foundation is dedicated to promoting affordable access to all sports, especially for young people in underserved communities.

“I’m super excited just to give a kid the chance to obviously play golf,” he says. “But the greatest thing for us is the access through sport in general and that’s where we come closer.”

The goal is to continue paying it through organizations like Youth on Course.

“I just want to do great things for the people who have done great things for my life,” he says. “I don’t think it’s hard. So you can put a face if you need to put a face on it. I put my face in because I like to do things and move in silence and just help because that’s what you are supposed to do.

“You don’t need recognition to help.”