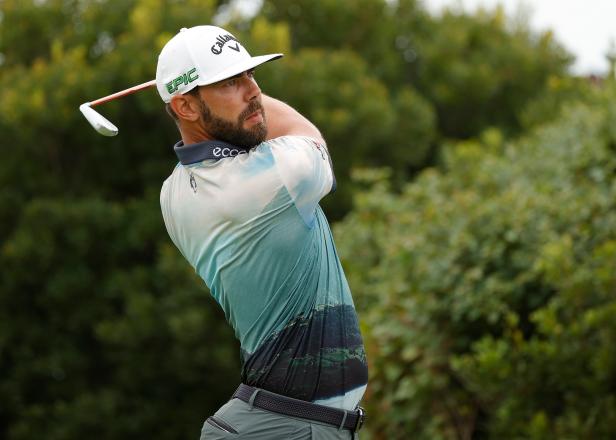 JERSEY CITY, NJ – Erik van Rooyen wasn’t sure which camera to look at and then had to introduce himself to the PGA Tour media officer, who walked him through the post-round engagements car wash.

He’s still new to it, at least relatively. At 31, he is not particularly young by today’s phenomenal standards. He has won both the European Tour and the PGA Tour and was in the top 50 in the world, so he’s not a complete underdog. But he’s playing his first full season as a PGA Tour member – he suspended his card with non-member points last year – and until a few weeks ago he hadn’t done much to deserve post-round attention at all.

“Definitely an up and down,” said van Rooyen of his debut campaign. “Lots of down. I only sort of found my feet in the last month or so. “

Before August, the lasting memory of van Rooyen’s year was terrifying. It happened on the island of Kiawah; maybe you remember. Crashed in a burglary and had to play the last two holes at level par to reach the PGA Championship Cut, his tee shot on 17th par-3 trickled … and dripped … and dripped into the water. He would now miss his fourth cut in a row, and he absolutely lost it. The normally sociable South African swung on a tee, missed, then turned and swung again. On that second swipe, he made sweet contact, breaking the marker, and breaking his club in half, his head sliding down the fairway and nearly cutting the leg of Matt Wallace’s caddy.

“One of the low points of my career,” said van Rooyen on Saturday at Liberty National. He’s in a much better place now. More on that in a minute. “It really doesn’t look like me to do something like this, but obviously I did and apologized for it. I’m still pretty embarrassed. “

His next tournament wasn’t a tournament at all, but a 36-hole qualifier for the US Open – on the loaded Columbus grounds for the final qualification. Van Rooyen shot 14 down to become co-medalist, then won T-10 in the Palmetto Championship that weekend. The momentum had apparently turned until he pinched his neck at the US Open and had to pause for the next three weeks. After a missed cut at the Open Championship, his season seemed set for an appearance in the finals of the Korn Ferry Tour.

“But there were glimpses of really good things during this stretch,” he said, “and I stuck to that. And now it’s coming through. “

In fact it is. Van Rooyen shot 62 on Saturday and will advance to the finals on Monday – the PGA Tour has chosen not to try at all on Sunday as Hurricane Henri will land in the northeast – with a chance to win the Northern Trust, but that’s not the only goal in the game. Van Rooyen entered the FedEx Cup rankings at 76th place this week and should move up to the top 20 after Saturday’s round. That would easily get him into the 70-man BMW championship, and a place in the top three would mean. he’s in a great position to make the Tour championship.

Van Rooyen is not busy with all mathematical possibilities at the moment, because he has a trophy in his sights. It would be his second win in three weeks after dropping the first win at the Barracuda Championship while all the big boys were playing the WGC-FedEx St. Jude Invitational.

“That win was huge for him,” said his caddy / college golf teammate / best friend, Alex Gaugert. He goes from ‘Feely’. Childhood nickname. “He’s so good, but sometimes he needs to be reminded of how good he is. It’s amazing what a little self-confidence can do. “

A little bit of confidence and a small person. Van Rooyen and his wife, Rose, who he met at the University of Minnesota, welcomed their first child six months ago – a girl named Valerie.

“I didn’t know you could love something like that right away,” said van Rooyen. “That was the greatest. I don’t feel like I’m suddenly playing for someone else or anything. But I – you are a little easier when you leave the course because you can look your daughter in the eyes and everything is fine. “

BYU graduate Patrick Fishburn has one last chance at a PGA...