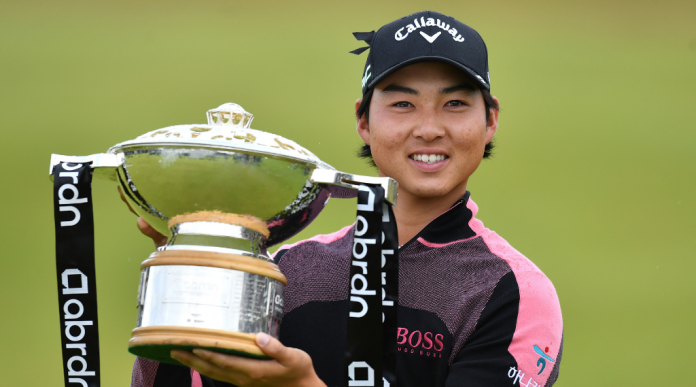 Starting the final round three shots back of Belgian Thomas Detry and Englishman Matthew Fitzpatrick and paired with fellow Australian Wade Ormsby, Lee’s first birdie of the day came at the par-5 third… and there were more where that came from.

Following on from a 6-under 65 on Saturday playing alongside Xander Schauffele and Robert MacIntyre, Lee made six birdies in succession to complete the front nine in just 30 strokes, his lone birdie of the back nine coming at the par-5 16th to take the outright lead.

Less than three weeks out from his 23rd birthday, Lee’s putt to win in regulation finished one roll short at the 72nd hole as he completed a bogey-free 7-under 64 and 18-under par total, needing just one playoff hole to best Detry (67) and Fitzpatrick (67), firing a brilliant approach shot into eight feet and making the winning putt for birdie.

Winner of the 2020 ISPS Handa Vic Open, the win is Lee’s second European Tour title and his first Rolex Series win, coming with it prize money of €1,123,300 ($1,782,694), a climb inside the top 70 in the Official World Golf Rankings and a place in the field for his first Open Championship.

“We knew the time was coming,” said an emotional Lee who was tied for 17th at last week’s Dubai Duty Free Irish Open. “My game was trending a lot leading up to this.

“It’s just crazy. I’ve kind of dreamt of it last night and people back home staying up late to watch me, sending messages. This one is for you too.

“I owe it to my family. I owe it to my coach back home. Just my friends and family. I’ve got such good support back home and on social media. I can’t wait to talk to them.”

Shortly after compatriot Ormsby made an ace in pouring rain at the par-3 12th for which he won 204 bottles of whisky, play was suspended for 90 minutes due to lightning in the region, Lee killing time by sitting in front of the fireplace and messaging friends and family back home in Perth.

Grateful not to have to play his next shot out of a puddle on 16 when the hooter sounded to suspend play, Lee returned to pick up his crucial seventh birdie of the round and then held his nerve with two closing pars to book his spot in the playoff.

“Hopefully we can keep it going next week,” said Lee, who has experience at Royal St George’s from his amateur days. Hopefully it’s one of us again.

“I’m happy for all those guys and happy for myself and getting the win. Yeah, go Australia.

“I know some of my friends are out there (at Royal St George’s) right now and they have shown it on social media, so I’m excited to go see them.

“I’m confident as ever, and I just want to go out there and play some golf.

“The ball’s listening to what I do, so hopefully be doing that next week.”

Victorian Lucas Herbert (66) backed up from his win in Ireland with a tie for fourth to move up to 12th in the Race to Dubai rankings and a jump into the top 50 of the World Rankings while Ormsby (69) narrowly missed out on a spot at The Open as he finished tied for 12th.

Lekkerkerk prepares for the Jr. PGA Championship after the section finals

How much money did each PGA Tour player make in the...