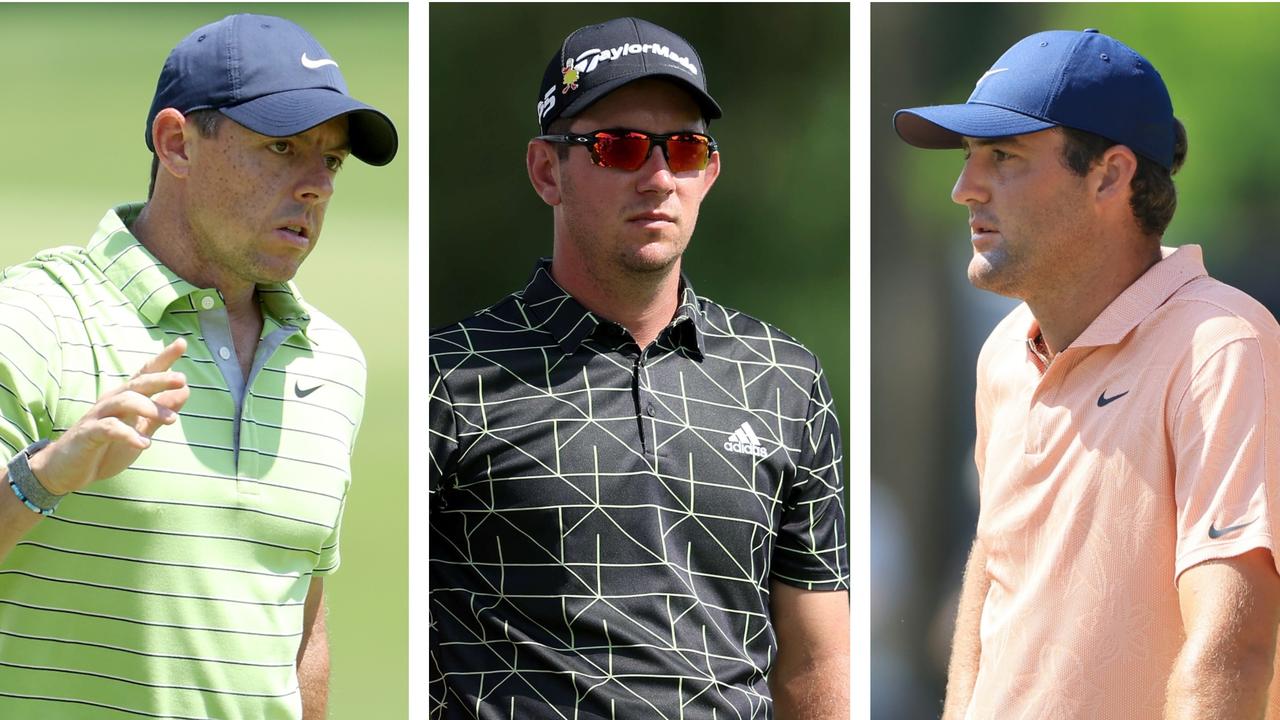 Four-time major winner Rory McIlroy is the clubhouse leader but rising Aussie Lucas Herbert is the surprise player right in the mix on a brutal afternoon at Southern Hills.

Herbert boldly declared he could win last month’s Masters. He missed the cut.

But the 26-year-old from Bendigo is firmly in the mix at the PGA Championship after finishing two-under despite a couple of late hiccups.

With conditions tougher for the afternoon field after the winds picked up and the greens got firmer, Herbert moved to four-under with a sublime up-and-down on five but dropped a shot on the par-3 sixth after going slightly long off the tee and two putting.

He consolidated with back to back pars, but then dropped another shot to close his round.

Joining Herbert in a share for tie-seventh is compatriot Cameron Smith.

World No.1 Scottie Scheffler’s afternoon threatened to implode, with the Masters champion yelling at himself after dropping another shot at 17 — his fifth bogey of the round — as his par putt was pushed past the hole as he dropped back to one-over.

But after taking a drop on 18, the 25-year-old hit an incredible approach shot and one-putted to hold par to breathe a giant sigh of relief to finish at one-over 71.

American young gun Will Zalatoris is in a three-way tie for second at four-under alongside compatriots Tom Hoge and veteran Matt Kuchar.

Tiger Woods struggled to a four-over par 74 in Thursday’s opening round of the PGA Championship.

Woods, who declared he could win the major before play, was foiled by poor iron shots and soreness in his surgically repaired right leg.

UP AND DOWN DAY FOR AUSSIES

Australia’s highest ranked player Smith finished at two-under, putting him in the mix.

It was a strong bounce back from Smith who was two-over after nine holes, before firing five birdies after making the turn, and ending with a bogey to sign for a 68.

Jason Day threatened at stages, but remains in the mix at one-over.

Fellow Aussies Cam Davis and Marc Leishman finished at two-over, while Matt Jones and Min Woo Lee were three-over while Adam Scott had a nightmare seven-over.

Australian Lucas Herbert and his Caddie Nick Pugh during the first round of the 2022 PGA Championship at Southern Hills. Photo: Getty ImagesSource: AFP

The 15-time major champion made his return from severe leg injuries suffered in a February 2021 car crash last month at the Masters, where he battled to walk 72 holes in finishing 47th.

In the second event of his comeback journey, Woods was boosted by a cheering crowd Thursday at Southern Hills, where he began with birdies at the par-4 10th and par-3 14th before his stamina and endurance began to fade.

“My leg is not feeling as good as I would like it to be,” Woods said. “We will start the recovery process and get after it tomorrow.”

Smith ‘crashed and burnt’ to expose a hypocrisy. A twist could give him the last laugh

LIV GOLF: The looming spectre of civil war hangs over golf this week. The game may never look the same

FEATURE: He nearly quit in a shocking golf slump. But ‘obsessed’ Day is ready to climb the mountain again

Woods, 46, said he is unable to bring full power into his swing because of the pain in his right leg, which is held together with rods, pins and screws.

“Well, I just can’t load it,” Woods said. “Loading hurts, pressing off it hurts, and walking hurts, and twisting hurts.

Woods, the former world number one now ranked 818th, made three bogeys in a row starting at the 18th and closed with back-to-back bogeys, finding rough and bunkers more often as his stamina waned and his iron shots weakened.

“I drove it well, but my iron shots were not very good. I didn’t get the ball very close,” Woods said. “I got off to a great start and didn’t keep it going. I really didn’t give myself any looks for birdie.

“I was struggling trying to get the ball on the green and I missed quite a few iron shots both ways. It was a frustrating day.”

Woods struggled in the bunkers, unable to stop his shots near the hole.

“All the bunker shots sort of came out hot,” Woods said.

“The sand is a lot faster than I thought it would be, especially if you get up in the areas where it’s not raked.

“Sometimes the sand, I’m guessing, and I guessed wrong.”

McIlroy saddened by Mickelson no show | 01:29

McIlroy, chasing his first major title since 2014, seized the early clubhouse lead in Thursday’s opening round,

Sparked by four consecutive birdies, his longest such run in a major, McIlroy fired a five-under par 65 at Southern Hills.

McIlroy, whose last major victory came at the 2014 PGA, started on the back nine with 15-time major winner Woods and Jordan Spieth before a huge crowd.

“It was a great start to the tournament,” McIlroy said. “I had a really solid round.”

McIlroy, who has not led or shared a lead after any major round since the 2014 PGA, battled poor major starts but the Masters runner-up reeled off four consecutive birdies from the 12th through 15th holes.

Follow all the first round action from Southern Hills in our live blog below!