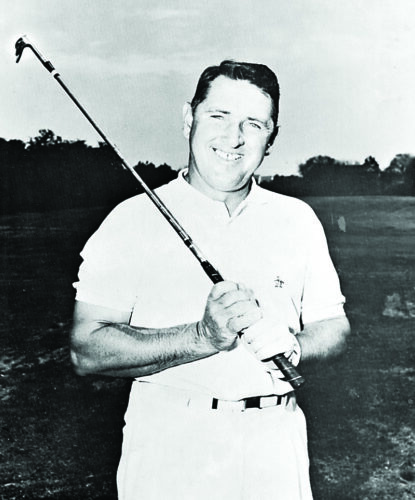 Courtesy photo
Lew Worsham was the top moneymaker on the PGA Tour for the 1953 season.

For decades now, the biggest event held at most area clubs has been some sort of two-man best-ball event. That certainly was the case last week in Mount Union where the American Legion Country Club saw the home team of Trey Heffelfinger and Matt Souders take home the championship trophy.

Two-balls weren’t always king, however. Beginning in the 1920s, area clubs like Bedford Springs hosted significant ‘open’ tournaments that featured individual stroke-play competition. In these ‘open’ events, the best head pros and top local amateurs were invited to compete. If a club was fortunate, they would also land a ‘big name’ professional from outside the area to attract fan interest.

Beginning in 1951, Mount Union club members began organizing their own ‘open’ tournament. Their first attempt at hosting resulted in a modest affair, but they were able to attract head pros from as far away as Ligonier and York. Many top amateurs from the region also competed in the event that was played as a one-day, 18-hole stroke-play tournament.

After regulation play that first year, Huntingdon head professional Harold Dore scored a 77 to finish in a tie with amateur Blair Miller from the same club. Also scoring a 77 was 14-time Mount Union club champ Bud Fields. It would take three holes, but Dore eventually outlasted the two amateurs to capture the first-place prize money of $50.

After this initial success, club members and area businessmen rallied around the tournament. The 1952 event saw a big increase in prize money with a $200 winner’s check offered as the top prize. Tournament officials were now able to recruit more top name professionals, and a big surprise came when the tournament announced a commitment from PGA touring pro Lew Worsham.

At the time, Worsham was head professional at Oakmont Country Club and competed regularly on the PGA Tour. Worsham was a highly respected player who had won the U.S. Open in 1947 (beating Sam Snead in a playoff). He also earned a spot on the 1947 U.S. Ryder Cup team that beat Britain and Ireland.

In July of 1952, area golfers were excited to see such a high-level pro compete at Mount Union, and it showed in the large crowds that came out to watch. Worsham played well in the event, but wound up finishing in a tie for 13th place before heading back to Oakmont.

And just a side note, Worsham went on to lead the PGA Tour money list in 1953.

Through the 1950s, the Mount Union community worked hard to promote and support their tournament. By 1958, an overall purse of $2,000 was offered to the golfers who competed, and the event attracted pros from nearly every neighboring state.

In 1962, the first-place prize increased to $700 and Pat Schwab, from Wilmington, Delaware, finished on top. Over the next few years, professionals from Maryland, New Jersey and Virginia took home the top prize, but beginning in the mid-1960s attendance at the event began to slide.

Today’s breaking news and more in your inbox