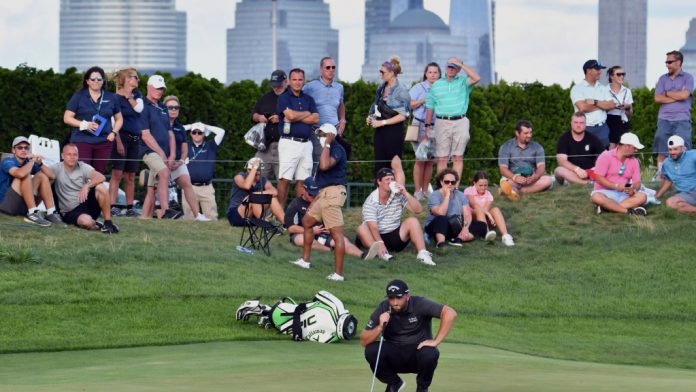 JERSEY CITY, NJ – The PGA Tour isn’t far from the bright lights of Broadway this week, and as the saying goes, the show has to go on.

The Northern Trust’s final round at Liberty National Golf Club was postponed to Monday as Henri transitioned from tropical storm to Category 1 hurricane status before hitting land near Rhode Island on Sunday and heavy rain and 40 miles – an hour wind when it got weaker.

Central Park in Manhattan has been showered with record rainfall and many New Jersey residents are without power, but tour officials hope to end the game on Monday despite a forecast calling for another “drenching rain”.

The start times were published late on Sunday afternoon, with the three players being sent off both nines. The first tee time of the day is scheduled for 7:30 a.m. ET, though veteran touring pro Lee Westwood isn’t so sure if this is feasible.

Trust of the North: Results | Photos | Get to know Liberty National

We are supposed to start tomorrow morning at 7.30 a.m. I will be shocked when that happens! @TheNTGolf @PGATOUR BTW … the Hudson River is not the 18th fairway! pic.twitter.com/xj8MwCATva

PGA Tour Rules official John Mutch said the outlook was sunnier despite warnings of flash floods in the area.

“Really good for 5 inches of rain,” Mutch told Liberty National’s ESPN, which was built on a landfill and has a SubAir system under the greens. “They were working on the bunkers when I was there. There isn’t a lot of standing water. I was pleased. I’ve seen a lot worse. “

By the time the third lap ended, Smith had caught up with Rahm at 16 under 197 with a course record of 60. The South African van Rooyen shot 62 and suddenly fell back in third place. He is one of five players expected to climb into the top 70 of the FedEx Cup scoring and advance to the BMW Championship, which kicks off in Baltimore on Thursday.

Should he not be on the right side of the cutline, he should travel to the Omega European Masters in Switzerland.

Ventured to Liberty National just before sunset. SubAir was running during the storm so the greens are good. There is standing water in fairways. Of course, it looked better than I thought. It’s still raining but so unsure of when the final round of @TheNTGolf will start. pic.twitter.com/1kwxEYtBLD

The forecast is sticky, with rain continuing through Sunday night and into Monday.

On Sunday evening, the PGA Tour sent a memo to all players in the Northern Trust field notifying them of a change in the tour’s bad weather policy.

“Given the importance of the FedEx Cup Playoffs as the culmination of the year-long race for the FedEx Cup and sequential promotion from one event to the next based on competitive performance, the Commissioner has decided to change the bad weather policy to the PGA TOUR as follows The tournament regulations ”, it says in the memo.

“For the Northern Trust, BMW Championship and Tour Championship, play may be extended beyond Monday if deemed necessary to complete 72 holes of the competition, regardless of how much play is completed on Monday.”

The goal of the tour is to finish the final round on Monday and will provide an update to players and caddies on Monday morning at 5:30 p.m. ET. After the place had rained more than 15 centimeters from Saturday evening to Sunday afternoon, the tour also announced that the final round will be held without spectators.

As for TV coverage, the tour also announced on Sunday:

CBS Sports will broadcast the finals live on CBS and Paramount +, Golf Channel, CBSSports.com and PGATOUR.com. Due to the changing weather conditions, specific times and distribution platforms will be announced tomorrow.