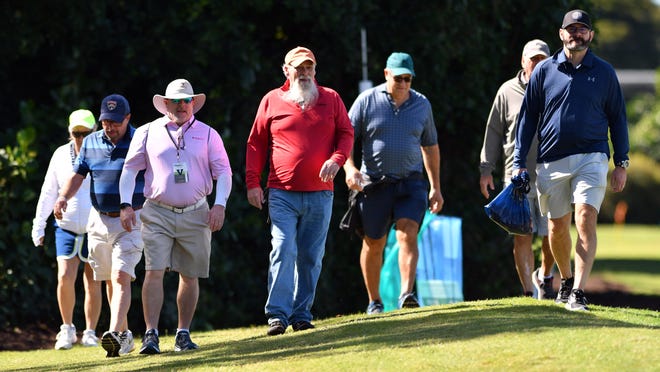 BOCA RATON – All the stars of the PGA Tour Champions play in the TimberTech Championship on the Old Course in Broken Sound, but it was the course crew who put in a heroic effort to prepare the course for two laps on Saturday.

After the first round of the second tournament in the Charles Schwab Cup Playoffs was canceled on Friday due to 5.3 centimeters of rain that flooded the Old Course, the entire course crew took up the challenge there and on the two Broken Sound courses next door To make the place playable when the first three-pointers started on Saturday at 7.45 a.m. with the numbers 1 and 10.

Shannon Easter, director of golf maintenance at Broken Sound, couldn’t have been prouder.

“All I can say is that my crew did an amazing job,” said Easter. “We went out with 52 people at 2:30 am. When we finished, we were two holes ahead of the (first players).

They dragged lights around so they could see what they were doing and used seven pumps to move the water from one place to another before finally pumping it into the lake on the 16th green and 17th tee. Easter said that these holes and the adjacent 15th hole, which has water on three sides of the green, had so much water that it appeared to have seven inches of rain.

Other crew members repaired divots and raked cart paths and coquina areas for the safety of players and fans. The greens had been double-rolled on Saturday morning, and while they may not have been as fast as tour officials would have liked, Easter said they were rolling at 12 on the stimpmeter.

Flooded bunkers were handled properly. After it finally stopped raining on Friday, the site staff fetched the standing water from the bunkers before it started. When Easter’s team returned early the next morning, a crew was shoving wet sand into the walls of the bunker to dry it. A second crew later raked the sand again.

These efforts were appreciated by the professionals who were able to lift, clean, and place their golf balls on the fairways and around the greens, even when it wasn’t strictly necessary.

“They definitely had to improve in a few places, but it was a lot better than I expected,” said Dicky Pride, who shot a 1-over 73 in group one from No. 1 on Saturday morning and a 72 that evening. “You got a small discount from the tee. Got a couple of mud balls, but not as many as I thought. It was very impressive how well the course was held. The greens were perfect.

“I know the maintenance team just worked their ass off to get this done because all of the bunkers – and unfortunately I was in several of them – did a great job of getting all of the bunkers ready. That costs a lot of time and effort. “

“You have to take off your hat to the ground crew. They did a wonderful job keeping the golf course in good shape, ”said Ken Duke of Stuart, who finished 7th in ninth place on the rounds of 69 and 68.

That he was in good shape to play 36 holes was the highlight of his day.

“It was very difficult. It’s just a long day,” said Duke, 52. “A day like today with the wind, it’s all about survival.

“It’s not really about getting through the day, but about tomorrow, if you are still tired from today. Hopefully we can come out tomorrow and give each other a chance. “

Ernie Els, who finished fourth at age 11, said the last time he played 36 holes in a day at Richmond last season, but players could drive in golf carts. Since this is a playoff event, no carts are allowed.

“I can feel it,” said Els, who played with Jim Furyk, the under 14 co-leader, and two-time TimberTech champion Bernhard Langer, 64, who had four birdies on his last nine holes to make a draw for 15th at 5 under.

“I did a lot of birdies, but too many bogeys,” said Langer, who had a total of 11 birdies, four bogeys and one double bogey. “It was fun to watch the other two.”

The defense was dormant

Defending champion Darren Clarke of Ireland had a tough first round, shooting a 6-over 42 on the top nine on the way to a 7-over 79. This included a quadruple bogey 7 on the eighth hole after hitting his tee shot in the water, his next shot into a bunker, and two shots to get out of the bunker.

He shot 74 in the afternoon and is penultimate in the 47-man field, a stroke better than Tom Byrum, who had laps of 75 and 79. These two tee off first in the last round on Sunday at 9:05 a.m.