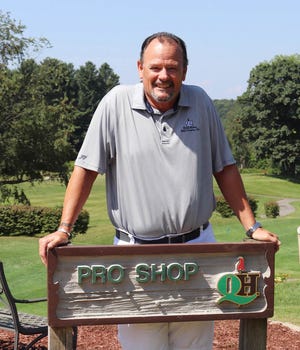 In 1981 Jim LeBlanc, 22 years old, began working as an Assistant Golf Professional in the Pro Shop at Gardner Municipal under the late Mike Egan.

“I thought about it recently and it hit me – I got into the golf business 40 years ago,” said 62-year-old LeBlanc last week at the busy pro shop at Quail Hollow Golf and Country Club in Oakham.

LeBlanc is now in his second year as head professional on the neat and picturesque square, only five minutes by car from his home in Rutland.

“This is such a beautiful place, and at this point in my life, I couldn’t be happier,” said LeBlanc, who is a professional golfer at several golf courses across the state. “We have a little gem of a golf course here and it’s in fantastic shape.”

And that would explain why LeBlanc is a busy man these days, with golfers flocking to Quail Hollow seven days a week.

Owners Garrett and Deborah Donlin built the Phil Wogan-designed Quail Hollow as a 9-hole course, which opened in 1992. The second nine holes were added in 2000.

“I played this course for the first time in 2019 and my first impression was that the greens were absolutely excellent,” said LeBlanc.

A year later he applied for the advertised managerial position, was quickly brought for an interview and was offered the position the next day.

“Jim was great,” said Deborah Donlin. “Everyone loves him here and he’s such a great golf instructor. In his lessons he reduces the basics so that there are no mix-ups. “

Quabbin Regional Golf Coach Lisa Paakkonen, whose team trains in Quail Hollow and plays home games, said, “Jim is so accommodating, so helpful to our kids and he has a great knowledge of the game.”

LeBlanc, who holds a lifetime PGA membership card and also offers golf lessons in courses at Mount Wachusett Community College, said teaching the game has always been one of his passions.

School sports:Who Are the Best High School Golfers in the Greater Gardner Area? Here’s a look at four.

LeBlanc recalls his long love for golf, and when he was 13 years old, he remembers taking part in the PGA Tour at the Pleasant Valley Country Club in Sutton.

“I remember walking my dad near the clubhouse and the very first PGA golfer I ever saw in person was Sam Snead on the PV practice putting green,” said LeBlanc. “From that point on, I wanted to be a professional golf player and like many of us play the tour. That didn’t happen, of course, but from that first weekend in Pleasant Valley on, I always wanted to be involved in golf in some way. “

Over the years as a professional golfer, LeBlanc has worked at Westminster CC, Indian Ridge CC in Andover, Hawthorne CC in North Dartmouth, Worcester CC, Miacomet on Nantucket Island, The Shattuck GC in Jaffrey, NH and Ellinwood CC in Athol.

After leaving Ellinwood, LeBlanc served for several years as a bar manager at the Napoleon Club in Gardner.

As a two-time GMGC junior champion, LeBlanc was the medalist with a 77 in the 1977 league championship held on his home seat.

When asked about his playing career over the years as a professional golfer, LeBlanc quickly recalls a special round in 1988 when he took a Pro-Am team from Worcester CC to victory at a New England PGA tournament at Portsmouth CC, New Hampshire led.

“I remember hitting my second shot on the first hole for a birdie to about two inches and that got me going,” said LeBlanc, who was named NEPGA Assistant Pro of the Year that same year. “The whole day in Portsmouth was my crowning moment as a professional.”

With a terrific 14-under-par scramble score of 57, the talented team of Dave Drake, Mark Manca, Elliot Drake and Geoff Tobia won the Birdies for Heroes tournament at GMGC last Friday.

The tournament raised $ 25,000 for Mission 22, a national community that helps active service members, veterans, and their family members overcome post-traumatic stress, traumatic brain injury, suicide risks, and other challenges. Mission 22 also works to unite civilians and the military community to raise awareness of issues and also to remember and honor service members.