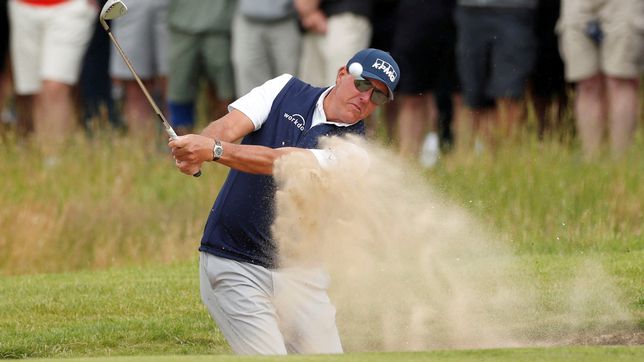 During the last four months things have taken a downward spiral for Mickelson. The 51-year-old will not be defending his PGA Championship title. He hasn’t taken part in a PGA tournament since January, when he last played in the Farmers Insurance Open.

His eagerness to play in the controversial LIV Golf Invitational series has sparked negative reactions from golf fans and fellow PGA players as well. In February, Rory McIlroy weighed in on Mickelson’s stance on playing for the Saudi Arabians: “I don’t want to kick someone while he’s down obviously, but I thought (Mickelson’s comments) were naïve, selfish, egotistical, ignorant. It was just very surprising and disappointing, sad. I’m sure he’s sitting at home sort of rethinking his position and where he goes from here.”

Although other pro golfers like Lee Westwood or Rickie Fowler are considering playing in the LIV Golf Invitation series led by Greg Norman, most of the world’s top golfers are keeping their distance. That, and the fact the PGA has forbidden players from participating in the new international tour, have made things quite uncomfortable for Mickelson.

Though he is a past winner at the Masters of Augusta and the PGA Championship, Mickelson has decided to skip both events. His decision to avoid this year’s second major at Southern Hills is a disappointment for fans and sponsors alike as he is only the third PGA Champion not to defend his title in the last 75 years.

It’s bad news that Phil Mickelson isn’t playing in the PGA Championship. No matter what else you think about the PGA Tour, LIV, Phil or anything else, it’s a bummer that he won’t be there to defend the defining win of his late career. Nobody wins here.

Viktor Hovland, the up-and-coming Norwegian golfer, shared his feelings on Mickelson’s absence: “It’s a bizarre situation, that’s for sure. It’s not often the defending major champion doesn’t come back to defend. I think we all would have liked to have Phil here and tee it up and see how he would have done. The way he won it last year was pretty spectacular. It’s just a weird situation.”

Mickelson is feeling pressure from fans, players, but also from his sponsors. Callaway, Workday, KPMG and Heineken have either paused their relationship with him or have decided to part ways. His comments made to golf journalist Alan Shipnuck, about the Saudis being dangerous people to get involved with, caused immediate backlash and forced Mickelson to write an apology on Twitter, his last post since Feb. 22, 2022.

Not playing in the PGA championship is part of Mickelson’s strategy to keep out of the limelight.

Golf legend Jack Nicklaus, who had been approached by the Saudis to lead the new tour, had some words of wisdom for Mickelson: “My advice to Phil? My advice to Phil would be to be patient. The world is a very forgiving place. But he’s the one — he has to decide where he wants to play and what he wants to do.’’