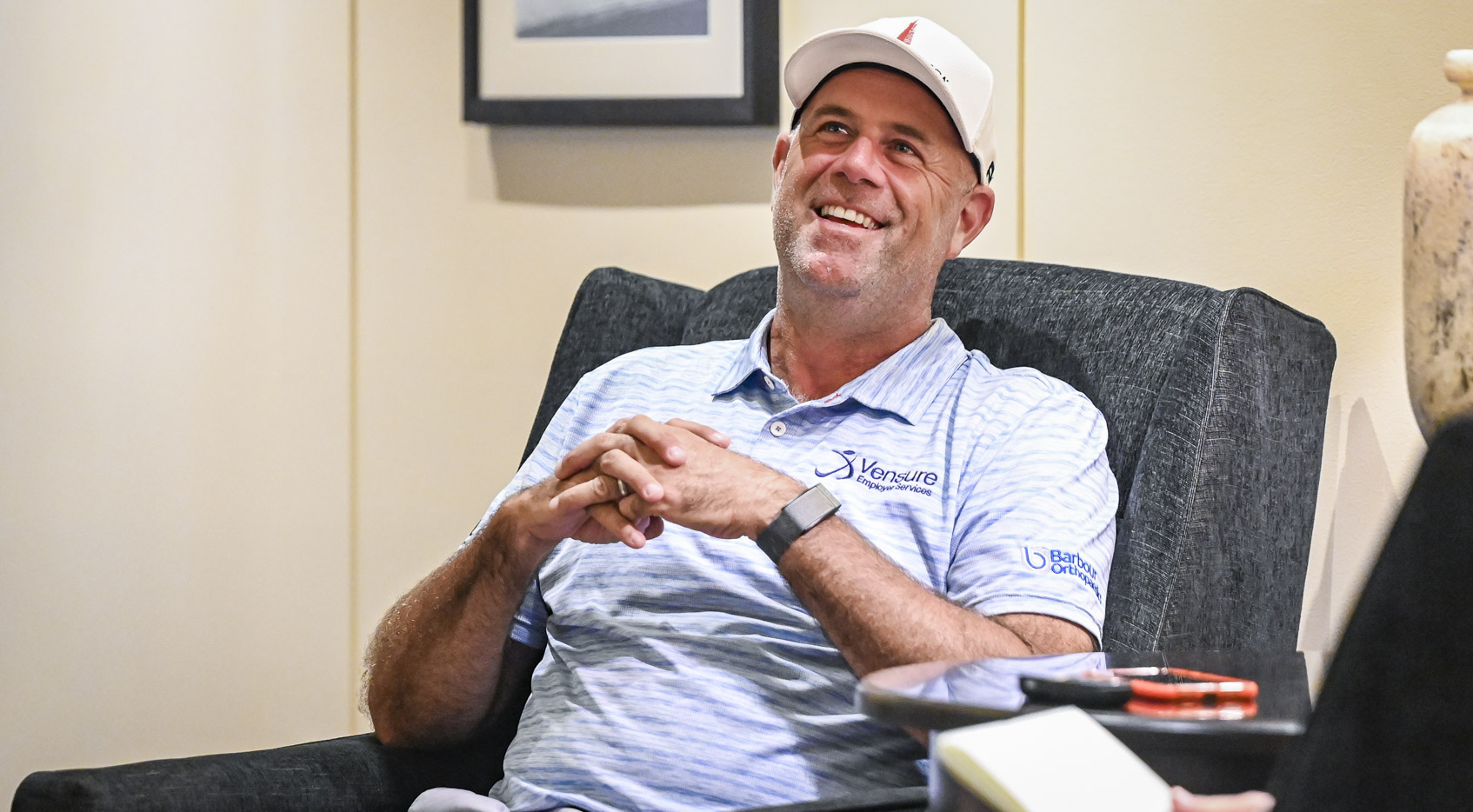 Stewart Cink was ready for the fight when he faced Collin Morikawa at the RBC Heritage in Hilton Head in April. Granted, he was five strokes ahead, but Cink was close to PGA TOUR Champions qualification, while Morikawa, half his age, was one of the hottest players in the world.

It turned into a mismatch, all right, but not what one might have imagined. Cink carded a bloodless 70 and won away, while Morikawa, after starting a birdie, fell back and eventually signed for a 72 (T7).

Underestimate Cink, a two-time winner this season, at your own risk. He is cage. He is smart. And today could be the day he shoots the skin off the pitch (a cinkism). Here he sits down with the PGA TOUR to talk about sharing his prime with Tiger Woods; his pro shop management career wasn’t; and what exactly it meant for him to win the Mexican Open – twice.

PGA TOUR: Your prime from 2000 to 2010 coincided with Tiger’s prime, which came into focus with your playoff loss to him at the 2006 WGC-FedEx St. Jude Invitational in Firestone South. If you could go back 20 years and give one piece of advice to your 28 year old self, what would it be?

STEWART CINK: I remember having a lot of stress. I remember thinking that I should win, I should be – I was at the top of the game. I was never number 1 in the world, but I got ranked high. I just remember sweating it out.

And did that hurt you?

SC: I would tell the 28-year-old to stop sweating because worry just won’t get you anywhere. I’ve compared reality to my expectations and that’s dangerous. I’ve learned that expectations are killer and that you have to manage your expectations properly out here to be successful.

SC: He embodied what you imagined the perfect golf to be. He had the length, he had the accuracy, he had the control, he had the short game and the putting, and he had the mental strength on top of that. He didn’t have a single weakness.

I would imagine that it probably feels like NBA players when they play against a guy like Giannis who is tall, can handle the ball, he is fast, he has good instincts, he can ricochet, and he is very physical. It’s probably something like this.

And an airtight mind game.

SC: Yeah. How do you compete against it? I played with Tiger at least half a dozen times on Sunday when he finished first. Seeing him at his best was a treat. It was demoralizing and it was kind of inspiring at the same time.

They made birdies at 16 and 17 to force a playoff with Tiger at Firestone in 2006. Even though he birded the fourth extra hole to win, was it a confidence boost?

SC: That was a big moment for me because I led Tiger to the finish and it was a long playoff. I didn’t quite get my way, but I was proud that I didn’t give in. I’ve looked it over. I had to do some clutch putt on the last couple of holes to force the playoff and did it – I brought it to him; I just haven’t quite finished it.

SC: It goes back to the times when I was stressed, 2000-2010, when I allowed myself to think about what I should be. And I did that because people were telling me what to be: ‘You have the game to win five tournaments a year.’ But I didn’t, so I felt like I was getting too little.

I still feel like I could have brought more to the table. Even though I took a couple of wins this year, I also missed seven cuts or so. There are times when I had a lot of play to go into an event and get 30th place – so I have to say I didn’t match my performance.

You joined the TOUR in 1997. What is the biggest difference between then and now?

SC: Almost everyone can win; the fields are just incredibly deep. The technology like Track Man and all the information with your coaching, biomechanics, conditioning, sleep, all the different things that make a guy like me who’s 48 years old and still can keep up. Twenty years ago when you were my age you finished. You wait until you are 50.

You worked hard with coach Cornel Driessen. How long are you now

SC: From the end of last season to this season, I’ve put on about 10 to 15 yards statistically. Cornel was a factor. He fought me through an injury in ’19 that formed the basis for me to get stronger in some areas and then I was able to tweak my technique a little to get the club head on the ball a little more efficiently.

Were these inefficiencies shown on a startup monitor?

SC: One hundred percent. And the eyeball too, you can see it. I drove the ball nicely, but I drove it a little deep with a lot of spin. Technically speaking here, but when you drive it low you need spin to make it look really nice, and it looked really nice. I hit fairways and played good golf but lost the carry and got no results.

Your short game coach James Sieckmann urged you to change?

SC: My swing trainer Mike Lipnick encouraged me to move the ball position a little forward to be more efficient. I thought, ‘I don’t know, I’m driving it pretty well.

Then James, looking at my stats, said, “You are inefficient with your driver. Your body is big, you have a lot of width, you technically have a nice swing. What would happen if you tried to make a little more use of what’s in there? ‘ It optimized my ball position and helped me load my back swing into my larger muscles.

After visiting Sieckmann, I went to Lipnick and said: ‘Well, I’m with you now.’ Because I saw the difference on the start monitor.

You made your son Reagan your caddy this year. What did that do for you?

We always come to a common ground. We don’t always agree, but we always get there before I hit the shot. Sometimes I do, sometimes he does, but he has a very good will to make decisions and it plays a big role in golf.

Has an electrical engineering degree?

SC: Industrial Engineering. He is an optimizer.

He helped optimize his father.

SC: Yeah. I experience zero conflict with him. I think it’s a 7 iron, he thinks it’s a 6 iron. With all my professional caddies there would be conflicts like – who is right? If I chose my club, I would feel the pressure to make it work because I didn’t want to be wrong. If I chose his club, there would be pressure. I don’t see that with Reagan. We always find a mutual solution before we take the shot, and that puts us in a mood where we’re both really ready to accept the results.

But is he gone after this season?

Yes, he’s only going to be my caddy for the rest of the FedExCup.

You’ve scaled up your drives but scaled down your home and left your spot near the TPC Sugarloaf for an apartment in the city in Atlanta. How was it?

SC: It was great, we really enjoyed it. We’re located in the middle of Midtown Atlanta on Peachtree Street. The city is both sides of us. We have parks in the back. Georgia Tech is right there. It’s a decent area. We’re just – we’ve lived in the suburbs for so long that we just wanted a change of scenery I guess. Between now and maybe when grandchildren come at some point. Soon we will marry two children and maybe one day a grandchild will come. At this point we may think less urban.