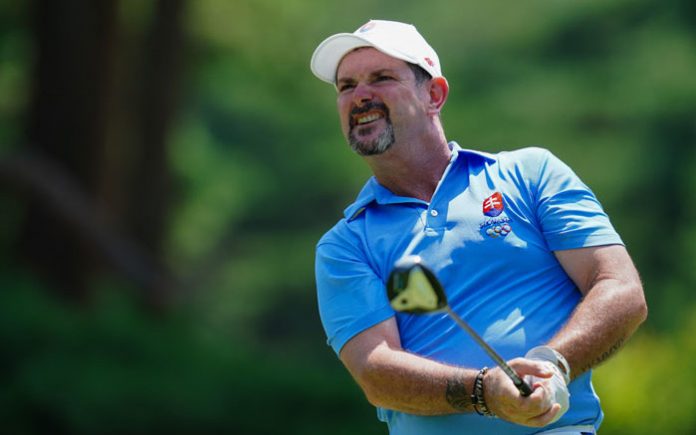 The 45-year-old South African-born standout is among those trying to reach the top 125 in the season points race to make it to the FedEx Cup playoffs starting next week.

The Slovak Rory Sabbatini watches his drive from the 13th tee in round 4 of the men’s golf single stroke game during the Tokyo 2020 Olympic Games at Kasumigaseki Country Club in Kawagoe on August 1, 2021. Photo: Yoshi Iwamoto / AFP

WASHINGTON – Slovak Rory Sabbatini, fresh from a silver medal at the Tokyo Olympics, is trying to secure a spot in the US PGA Playoffs at the Wyndham Championship this week.

The 45-year-old South African-born standout is among those trying to reach the top 125 in the season points race to make it to the FedEx Cup playoffs starting next week.

Sabbatini, who shot an impressive 61 to reach the podium in the final round of the Olympics, ranks 141st.

“This is a huge week. I have a big job to do,” said Sabbatini. “I’m not exactly sure which position I need to finish, but I’m pretty sure that it will be at least one top 10 finish this weekend to get into the playoffs.

“I know I have a tough job. It’s a good field, lots of good players, so I just have to keep my head down and keep trying to move forward and hopefully make it to next week.”

World number 114, Sabbatini, whose last PGA win was at the 2011 Honda Classic, has made three top 10 appearances in eight previous starts at the event, but only one top 10 result this year, in Torrey Pines in January, and has missed the cut in six of his last eight PGA starts.

“It’s been a very frustrating year,” he said. “I was about to whip my game up and go in the direction I wanted to go. It was kind of a love-hate relationship with my golf game that year.

“I feel like everything is kind of firing in the right direction here and I just have to let it happen.”

Among those Sabbatini is trying to jump into the line-up this week are Colombian Camilo Villegas, American Rickie Fowler, Canadian Roger Sloan, Australian Cameron Percy and English Justin Rose.

Sabbatini, a runner-up in the 2007 Masters, said he switched citizenship to his wife’s home country in 2018 to expand the sport in Slovakia and believes his medal was an important step towards that goal.

“It was hugely worth it,” he said. “To represent them only so that we can attract and inspire young golfers. Obviously, qualifying for the Olympic Games was a great advantage, and then the medalist was way beyond that.

“The surge of support last week when we were back in Slovakia, just the excitement, we were hoping for.

“It was absolutely overwhelming. People stopped us all over the street, people stopped their cars on the side of the road to congratulate us. It was amazing. You could really feel the support, the appreciation and just the emotions from the people. “

Download the Eyewitness News app on your iOS or Android device.