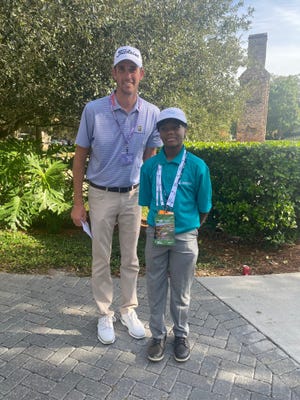 Parker Dunkin missed the first seventh grade basketball game last week, but it was still a pretty good week of sports for the 12-year-old from Oxford, North Carolina.

On Thursday, he spent the day “behind the ropes” with Chesson Hadley, a former Georgia Tech golfer from Raleigh, NC, not far from Dunkin’s hometown.

With Dunkin close during the opening round, Hadley fired an 8 under par 63, which led Hadley’s wife to tell Dunkin that he might need Dunkin back on the course if he started bogeys.

On Friday, Dunkin and his mother Sharonda Bullock attended the Charleston basketball tournament with a front row seat for the Clemson vs. St. Bonaventure game and the Marquette vs. West Virginia game.

He was the “patient ambassador” for the latter game and was introduced to the crowd on center court while his story was shared by the speaker on the loudspeaker.

Her life changed on the first day of school in autumn 2019 – it was “a completely normal Friday morning,” his mother remembers.

Then it didn’t get completely normal.

Sharonda had a seizure while driving a car.

“We were in a corner, so we should have hit the traffic head-on, but I turned right into a field of trees,” said Sharonda. “Parker came out of the back seat and took action.”

Parker unbuckled his seatbelt and stretched across the front seat to take the wheel. He couldn’t avoid a wreck, but his actions likely resulted in serious injuries to his little brother Bryson, who was sitting in a car seat.

“When he reached out from the back seat, his chest pierced his lungs, liver, and gallbladder,” said Bullock. “He also suffered a broken ankle.”

Complications with adequate blood flow after the accident left the family faced with a simple decision: “They told us that they would have to do an amputation in order for him to survive. Otherwise he wouldn’t be with us today. “

He will be back in Greenville on December 10th for his next prosthetic fitting, which will be required roughly every six months.

“He just goes with the flow,” said Bullock. “He won’t let too much hold him back.”